In the late Middle Ages in Europe, there appeared a very noble-looking, expensive, and beautiful outer garment that quickly became fashionable among the wealthy. This robe’s design was so beloved by people that it is still worn by some of us in the modern day. This outstanding outerwear piece is called a “houppelande”. Let’s dig a little deeper and see the difference between male and female houppelandes, find out more about the cut and embellishments of medieval houppelandes, and learn about its origin.

A houppelande is a unisex outer garment worn in Europe in the late medieval period. This outerwear looked really opulent – long flowing cloak, with wide, flaring sleeves. A lot of fabric was used to make it, which meant that only wealthy people could afford such clothing. Male houppelande was sometimes shorter – anywhere from ankle-length to knee-length. But floor-length male houppelandes weren’t out of ordinary. Female houppelande was practically always floor-length and even could have a train.

There were other differences between a men’s and women’s houppelande as well. For instance, men belted it at the waist, while women beneath the bust.

Men wore a houppelande over a tunic and hose, women over a long underrobe. 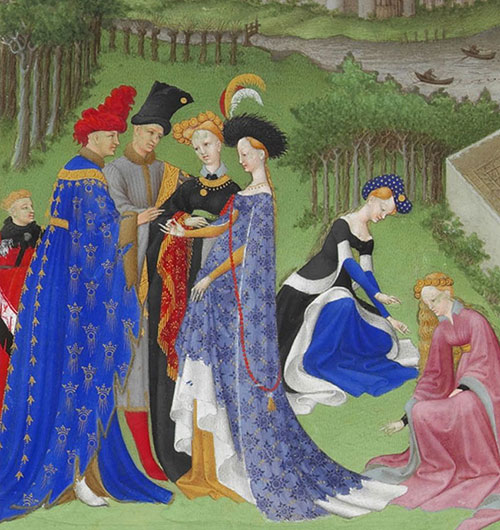 Illustration from “Très Riches Heures du Duc de Berry” (The Very Rich Hours of the Duke of Berry), circa 1412-1416. You can see men’s and women’s houppelandes here

The first houppelandes were used around 1360. And this outerwear was fashionable for about a century.

The predecessor of a houppelande was the herigaut – another wide robe worn in the 13th and early 14th century. It had similar hanging sleeves.

There were many different variations of a medieval houppelande. Some had hanging sleeves and others didn’t, some were sewn from plain (though, fine and expensive) fabric and others used patterned fabric, some were trimmed with fur and other had dagged or decoratively cut edges, etc. But no matter what color, length, adornments the houppelande had, it always looked regal. Which is totally understandable – all those numerous pleats of fabric, wide sleeves that could reach the ground, ornate belts, and various trimmings definitely were eye-catching. 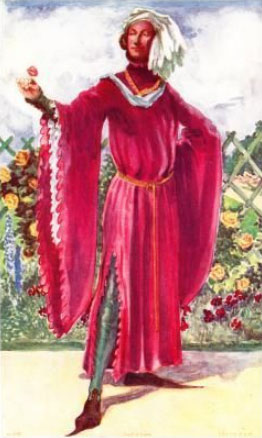 Dion Clayton Calthrop “A Man of the Time of Richard II”, 1907. This houppelande is really bright and colorful

The houppelande usually had a high collar, sometimes it was a stand-up collar. But, in general, the shape of a collar and sleeves varied.

The fabrics most often used to make a houppelande were silk, brocade, velvet, and other expensive cloth. The lining often had a contrasting coloring to add more brightness to the robe.

In the later period, this garment gradually turned into modern academic and legal robes. Today, graduate students, judges, and some other officials still wear a variation of a houppelande. And it’s not surprising – it would be a pity to lose such a regal and beautiful garment to history. 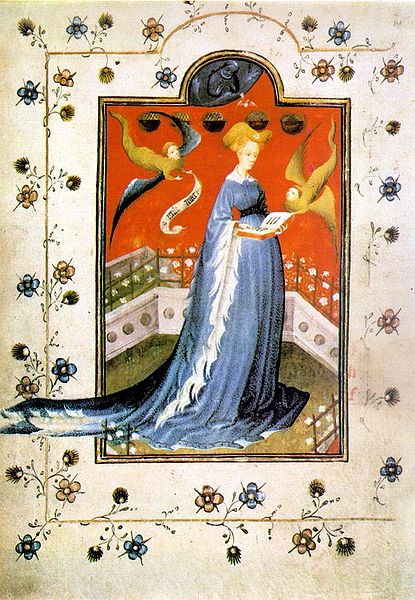 Illustration from a prayerbook “Sporen in het landschap” (Traces in the landscape) owned by Marie de Gueldres. We see a nice female houppelande with super long sleeves here