The Witcher is one of the most anticipated and long-awaited TV shows of 2019. Season 1 is already out there for all of us to see, so we’ve decided to make an analysis of the stage costumes used in this series. In this material, we'll do a brief summary of the costumes and discuss the problems and challenges the costume designers came across during the shooting of this wonderful TV show. The rich tapestry of textures, a combination of metallics, blacks, and jewel tones, and some clever fabric manipulations – the costumes of the first season of The Witcher are a feast for the eyes.

This article is based on the video from a YouTube channel “Costume CO”.

The Witcher is an action fantasy drama TV series created for Netflix by Lauren Schmidt Hissrich based on the book series of the same name. 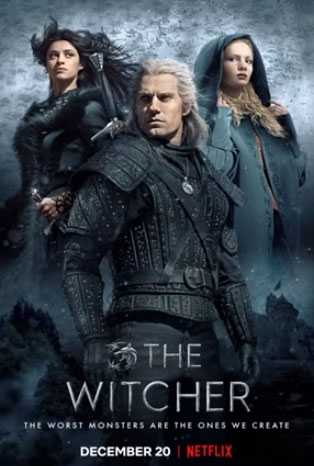 The costumes were created by London-based costume designer Tim Aslam. He said in an interview that his inspiration for The Witcher came from a variety of sources, including gothic stories, 1930s and 90s gothic, and Haute couture elements. Tim Aslam: “I took individual elements that I'd seen somewhere before and combined them into something new. It's a bit like architecture – I want what is known like ‘medieval fashion’ to look a little different. I had a lot of fun with it”. 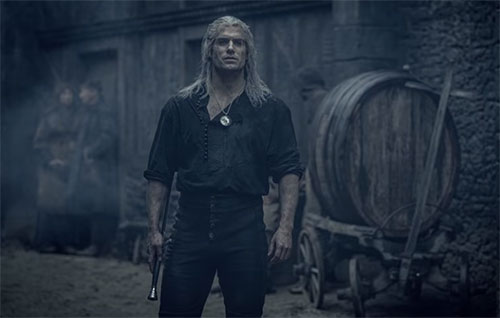 Tim Aslam created a Costume Bible with a collection of images from many eras, adding in other elements to finish the costume.

He said in an interview, “I did not want them to resemble medieval costumes, well-known from various series. It meant connecting different, seemingly mismatched elements. Often, the outfit was also influenced by the decoration. I also used various techniques of material handling, for example, those used in the 1930s”. 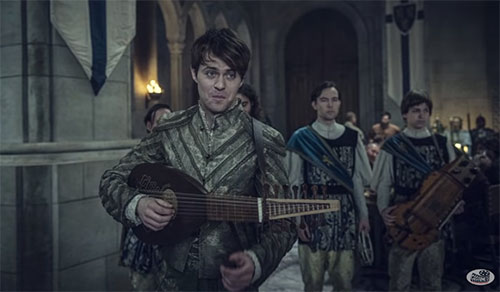 The designer didn't want to go the way of the videogame, as he describes it as “… very stylized, almost cartoonish”.

The showrunners wanted the costumes to look credible but also fashionable, cool, and sexy. It was necessary to find a balance between what was practical and what was effective. 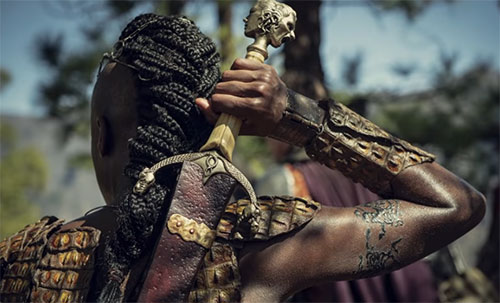 The showrunner Hissrich requested slim fitted trousers and doublets on the men and slim dresses on the women. 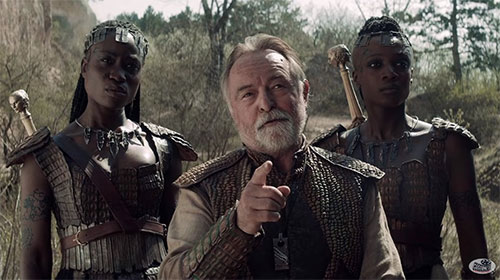 A team of about 130 wardrobe staff also had to create multiples for stunt doubles. According to Tim Aslam, the staff included 4 main tailors, each had their own team of about 7 people. Nearly 30 people sewed costumes for the crowd. They also had people working on the set or only in the office.

Because this series was shot largely in Budapest, Hungary, Tim Aslam had to plan in advance for designing remotely even before he knew what the final design might entail. So for this reason, the wardrobe buyers made all of their fabric purchases in the UK and Europe in advance. 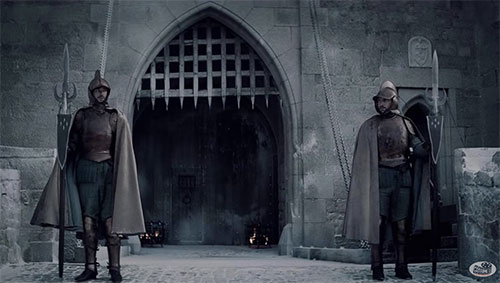 Tim Aslam told Turkish magazine Episode, “We were going into a fast production process, so it was very important that we had everything we needed. It would be a waste of time to place orders otherwise and wait for them to arrive. In fact, this can be a little intimidating because you have to rely on your instincts”. He says, “In the future, you may need to buy according to what you expect to use for months later. Sometimes even for a character that has not yet been written. You will need to have the materials at hand”. 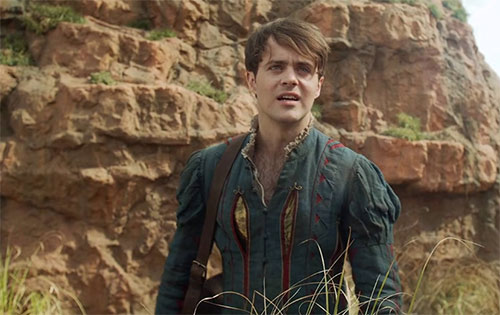 The designer likes working with high-end upholstery fabrics, saying that they have more interesting avant-garde touches than regular silk, cotton, or linen fabrics. 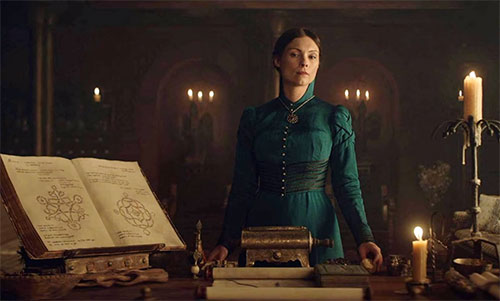 There is no set time frame to make a costume. The length of time it takes varies depending on the complexity of the costumes. Some can take over 2 weeks with 8 people working on different items at a time. The team will often work on 10 costumes at the same time.

Of Geralt’s costume, in particular, Tim Aslam says that the studded black leather armor Geralt wears didn't exist. It's a modern addition. But that natural leather armors or similar ones were used in Ancient Rome and Ancient China. 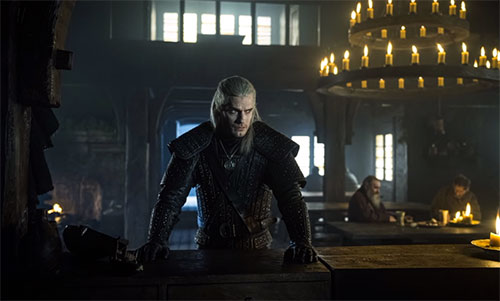 For Geralt’s armor, Tim Aslam used the books as a launchpad for his ideas and studied armor in ancient Eastern civilizations, Roman, and medieval times. 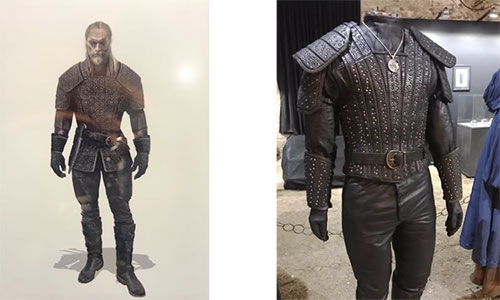 Actor Henry Cavill, who was very particular about his costume, also had a great deal of input into the design, along with his wig and weapon.

Tim Aslam said, “Geralt’s character is a character who has entered many battles with different monsters. That's why his costume and his armor always reflect attrition. But during his journey, he obtains new versions of his costume by getting similar outfits that fit his needs”. 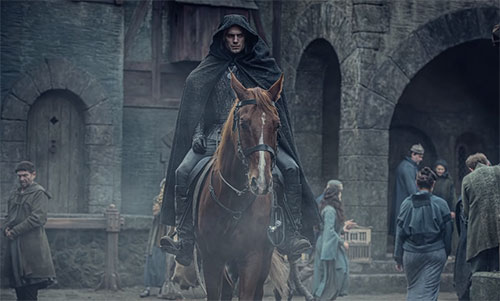 Geralt's costume is also designed to accentuate Cavill’s body but also reflect the wear and tear of his clothing, based upon his environment.

The costume designer says that this was a challenging design because of the fans’ expectations of what Geralt should look like from the books and video games. He had to find the balance between giving Geralt a tough and dangerous look but also a costume that allowed Henry Cavill, who did most of his own stunts, the ability to move freely. 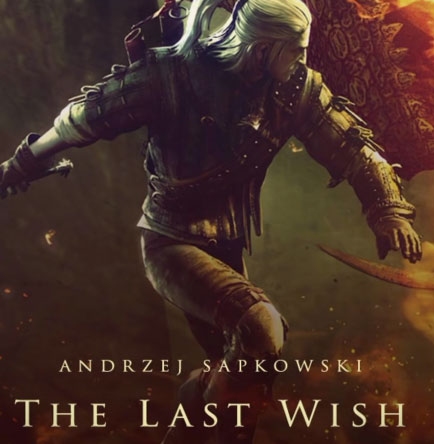 According to Polygon, Henry Cavill made breakfast and slept in his armor to fully break it in. They also reported that Cavill’s muscles wore down the leather at such an alarming rate that replacements were constantly produced to meet the production's needs. 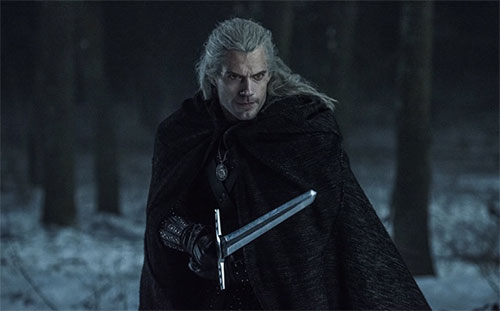 While most of The Witcher’s extras brandished big swords, the one Cavill wields is real, according to Polygon. The actor was heavily involved in the design process, according to supervising armorer Nick Jeffries, including the size, the cut, and how it would move in his hands.

Ciri begins her journey as a princess, the future leader of the territory itself. 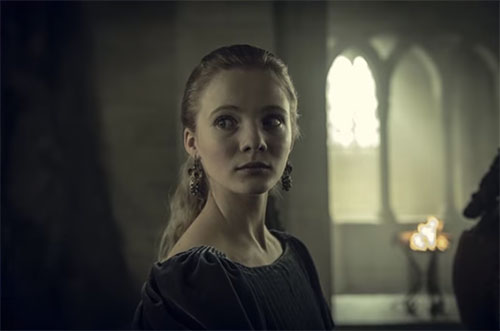 Her first costume positions Ciri as a fashionable and noble young lady, the leader of the future. 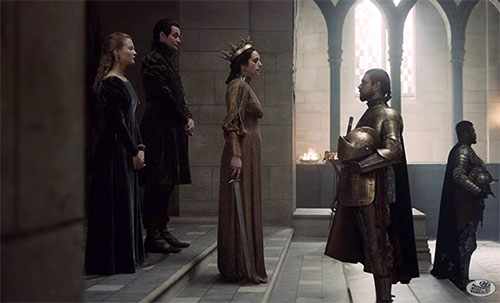 Tim Aslam says that then she has to escape and cannot change her clothes, therefore her clothes become messy and uneven. The outfit she wore during the entire first season was supposed to be practical and useful because there were many escape scenes and running scenes. 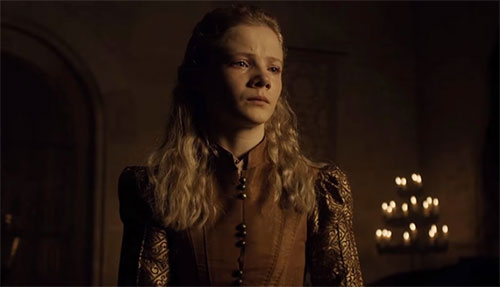 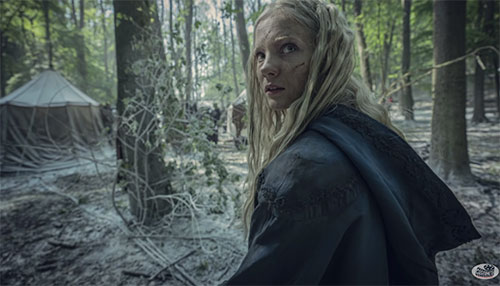 “Therefore, we used wide pantskirts for Ciri and her aim was to not be restricted in the action scenes”, Tim Aslam adds. 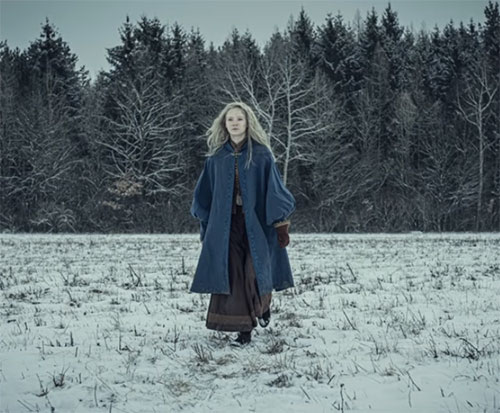 Also, he states that “It has an almost childish fragility and sensitivity. After she escapes, she's left all alone and unaware of what's going on around her. So the cape I designed for Ciri has a certain elegance, but this is not an entirely adult outfit”.

We see Yennefer's journey through her change in costumes in Season 1. Tim Aslam explains that “Yennefer starts her journey at a lower position, realizes her power, and gains confidence. We initially prepared her clothes based on the model of the farmers peasants. We designed her clothes to be that of a poor farmer – dirty, neglected, and disheveled. Then, we turned the costume into an Aretuza uniform”. 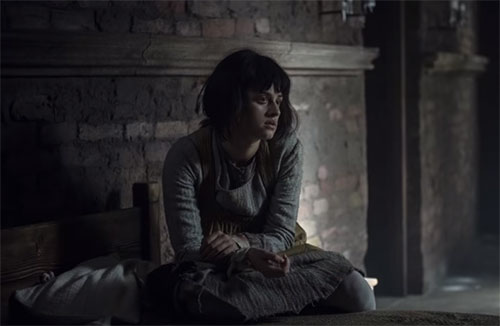 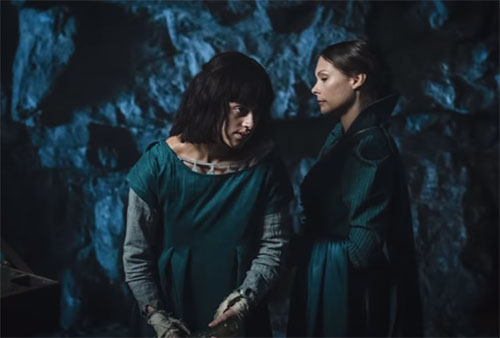 Tim Aslam says that after fully fulfilling her potential, her clothes become more courageous, strong, and flashy, in accordance with her new physical structure. 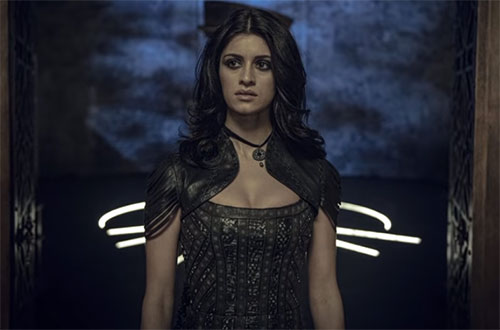 She wears brave clothes, a reflection of her newly discovered self-esteem.

In the books, Yennefer wears only black, white, and gray clothes because the colorlessness of the clothes reinforces her strength and abilities. 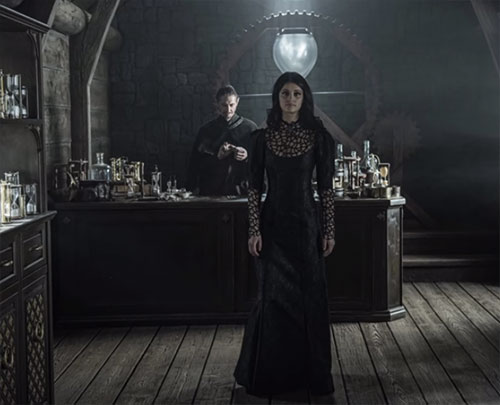 Tim Aslam adds, “Therefore, the biggest challenge I had in designing Yennefer's costumes was to design different and interesting-looking clothes with such a limited color palette”. 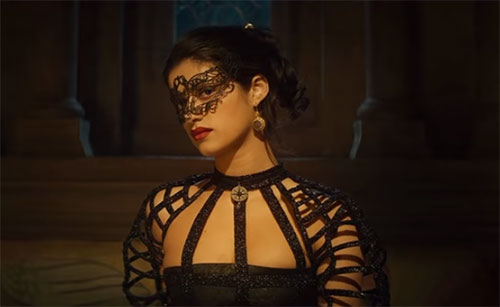 The costume designer groups the various beings in The Witcher world by creating costumes that were specific to each group using common design elements.

Tim Aslam says that the elves’ costumes, for instance, used a special fabric-processing technique. He said, “We used multi-layer dress sleeves and hard tunic cuts similar to a medieval tunic. Their costumes wear off and change the same way because they have to live in harsh conditions and are constantly chased and hunted by humans”. 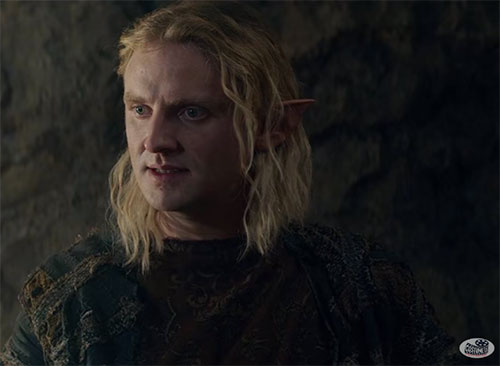 Meanwhile, the northern kingdom of Cintra is inspired by the 1930s film noir and gothic sentiment. 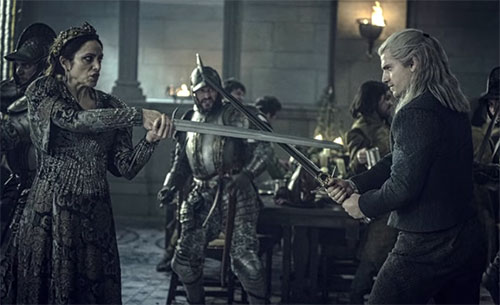 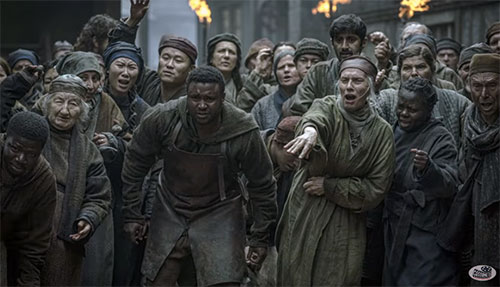 The Nilfgaardian armor in the books is described as “black with a Sun motif on it”. Tim Aslam said that, next to Geralt’s armor, this was the most challenging because it was meant to be threatening and strange. But he didn't want to go the traditional route with medieval or Renaissance armor. He says, “I thought it would not be enough to express the dark and scary power of the Nilfgaardian armor”. Some fans have criticized the look of the armor because it deviates quite severely from both the books and the games. 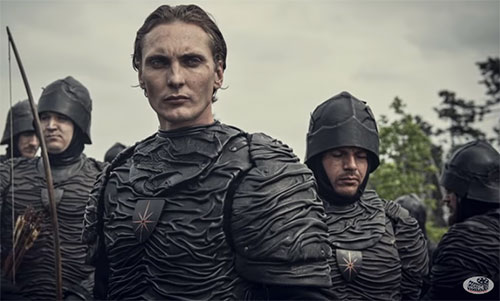 The showrunner Lauren Schmidt Hissrich thought process behind the crease spoiled leather look is that the Nilfgaardian armor is one of conscription. As they march northward, the armor pillages towns and forces villagers into military servitude. They are not an elite fighting force – yet. They are powerful leaders in the forefront, but the army itself is more rag-tag, born of necessity, without glamour or means. Their armor reflects that. 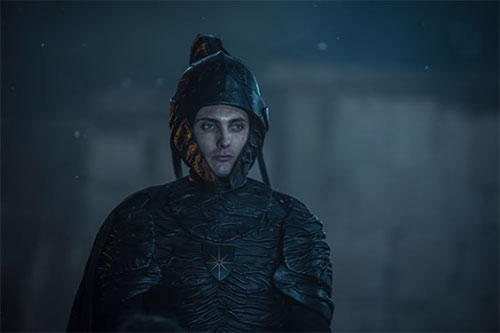