Aristocratic menswear in the 16th century. How did noblemen dress in the first half of the 1500s?

The European fashion trends of the 16th century look rather bizarre for a modern observer. But that’s what makes it so interesting to study the history of fashion and the clothing traditions of a certain era. In this article, we’ll find out how wealthy European men looked like in 1530s-60s. We’ll try to surprise you with weird items of clothes, functional jewelry pieces, and unusual shapes and silhouettes of garments. This historical period is rich in portraits that can help us distinguish the main features of male clothing.

Let’s take a few famous portraits from the 1500s and look at the men’s outfits depicted on them.

Portrait of John Frederick I

Here is one of the 16th-century portraits of noblemen. It is the portrait of John Frederick I (also known as Johann the Magnanimous) made by Lucas Cranach the Elder. John Frederick was the ruler (called “elector” at the time) of Saxony in the 1532-1547. This painting was made in the 1530s. 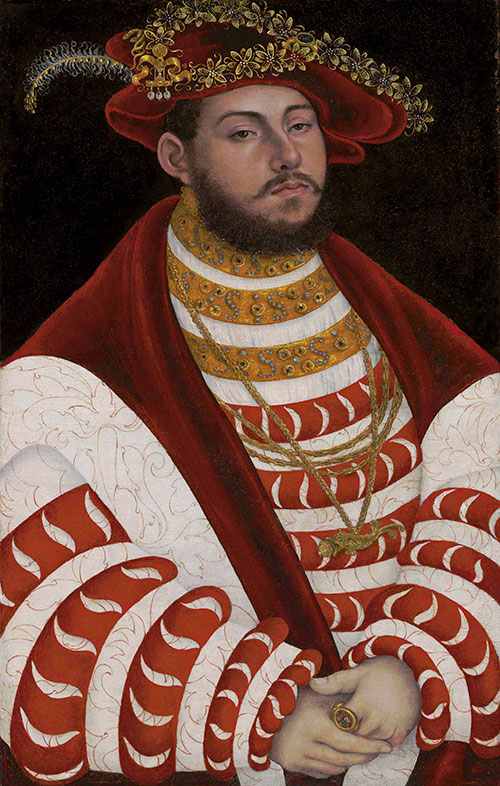 The portrait is rather detailed, so we can tell a lot about that period’s male clothing by this painting. First of all, we see the headdress, jewelry, and fashionable details of the upper garment.

In the 16th century, men's fashion was actually as important, if not more so, than women's fashion. With the help of clothing, males showed their social status, especially the royals, aristocracy, and wealthy businessmen.

Of course, we all understand that gold jewelry worn by men were very expensive, and we see a lot of gold on this portrait – his hat is adorned with gold flowers, he has gold chains around his neck with a large pendant, and a gold ring. But what not all people know is that the fine fabrics at the time were almost as expensive as jewelry. So, even if a man didn’t use jewels at all, the quality of the fabric used to make his clothes told volumes about his wealth.

The pendant at his neck probably is not just a trinket. It must have had some function – could be a toothpick or pomander (jewelry filled with spices that would give off a nice smell, like a perfume holder) or some other thing. People often used pomanders in the 16th century.

The fashionable silhouette in the 16th century for men was a cube, with broad shoulders, wide waist, and thin legs sticking out of this cube. Sort of SpongeBob-like silhouette)). In this portrait, you can see that his shoulders and arms are enlarged by extra folds of fabric and extra layers. Also, the hat is broad rather than tall, which is typical as well. Unfortunately, this painting doesn’t show us the lower body, so let’s look at other portraits, too. 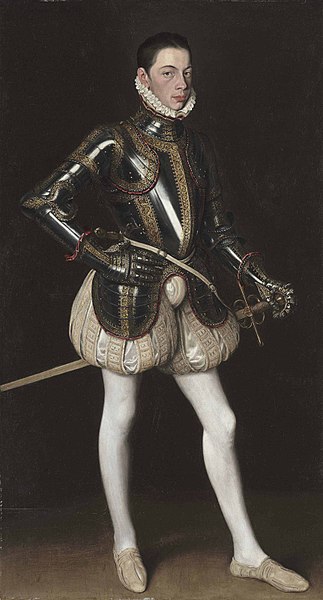 The man is depicted in full height here, so we can learn more about the fashionable silhouette of the era. What important details can we notice? First of all, he’s dressed in the armor of Spain – the Spanish king was his uncle, so it’s understandable.

In the first half of the 16th century, the trendy male silhouette reminded of the clothing worn by soldiers on the battlefield. Men tried to look macho, as masculine as they could. By the way, the codpiece element on his pants is also a fashionable item worn in an attempt to look more male, thus it’s hyperbolized size. Another reason to wear armor is because it’s never out of fashion, like other pieces of clothing. A man could order a portrait in armor and hang it on the wall for centuries to come, and it will always look up to date.

Then, it’s the white ruffled collar – rather typical piece. Looks elegant and crisp.

And the trousers are proper for this period. In the 16th century, it was important to show that a man had beautiful strong legs. So, they wore short and plump pumpkin breeches and tights. For a modern fashionista, this costume may look odd but there was a particular reason for each garment to be worn. 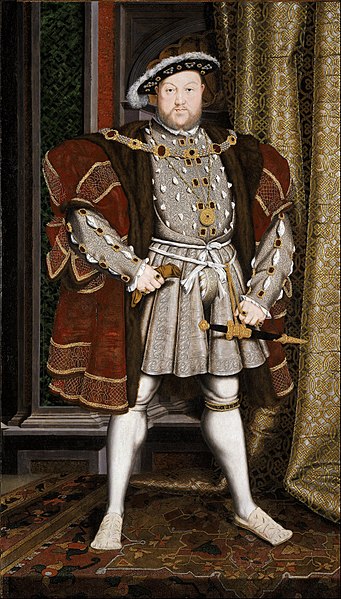 And you can see all the same features – rectangular silhouette, wide shoulders, wide hat, open legs in tights, the codpiece, and a lot of gold jewelry.

The fabric is not plain but patterned or embroidered, which increases its cost. There are typical little slits on the sleeves and bodice and you can see the white shirt peeking through them. On the sleeves, the slits are adorned with jewelry.

In this painting, another thing is pretty obvious – it’s the second purpose of the codpiece. Except for displaying the masculinity, this item also protected the groin. Look, the dagger hangs on the cord at the waist and, obviously, it swings during walking, running, jumping, riding, etc, so it can easily hit the man’s tender parts. That’s where a padded codpiece helps a lot.

So, we’ve seen 3 different portraits from the first half of the 1500s. And they all display very similar men’s clothing worn by the royals and noblemen. If you take other paintings from the same period in western or northern Europe, you’ll find pretty much the same outfits on males. So, this is the fashionable silhouette and details of the 16th-century male aristocratic attire.