One of the best modern Gothic horror romance movies “Crimson Peak” shows very beautiful and extravagant stage costumes. They are made rather close in design and detail to actual clothing of the late 19th – early 20th century. In this article, we’re going to look closer at the Lucille Sharpe’s outfits, one of the main characters in this film. Her set costumes definitely deserve attention. Also, we’ll see the historical equivalents of some of her garments, worn by real people in real life.

This article is based on the video from a YouTube channel “Costume CO”.

The stunning costumes used in this movie were designed by New Zealand veteran theater and opera designer Kate Hawley. She used a variety of fabric manipulation techniques in the construction of the costumes, including an assortment of pleating applications and trimming. 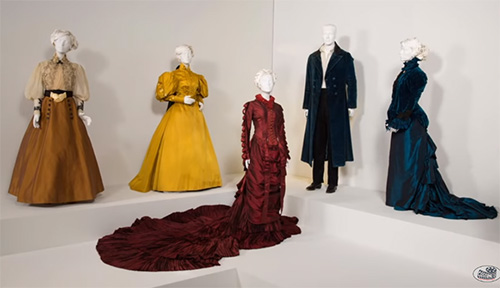 Of the costumes, Hawley says, “The silhouette was true to the period but we did make allowances because the colors and details were more based on themes and the character arc. We took liberties, it wasn't exact by any means. Some people said, “Oh, it looks very real”, and I think, “Actually when you see the reality, it's not”. We kept to the silhouette and things like that, but in some moments, you want to exaggerate a feeling so you need three extra meters of fabric to create a movement”. 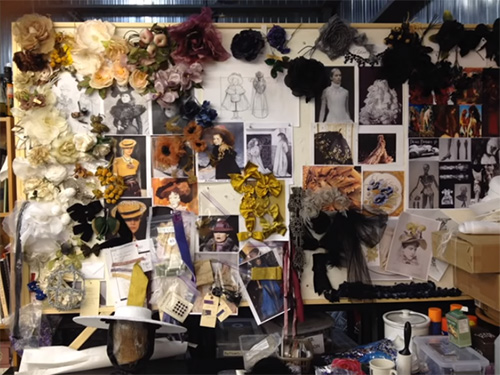 Kate Hawley made mood boards, visual storyboards to represent character arcs. “I've done a whole lot of mood boards in response to ideas that Guillermo [Guillermo del Toro, film director] and I had talked about. Even in the workroom, the team maintained an inspiration board, like the one seen here, with images and costume bits”.

In this drawing, you can see how Kate Hawley incorporated Gothic architectural elements into her design. In an interview with the MUSE, costume designer says, “The house really dictated how to approach the costumes from a sculptural point of view, to give them extra depth, to give them a painterly quality. I didn't want to get myself caught up in detail that didn't feel like it meant anything, like generic lace or decoration, so all the details we made and they all came from the symbolism of the characters or the house itself”. 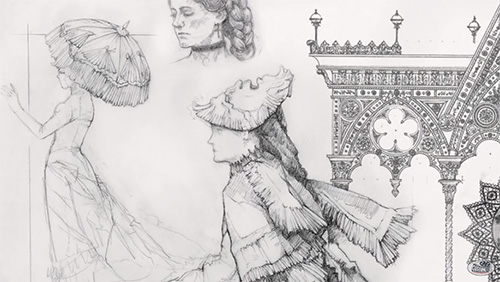 While the men's costumes are machine-sewn with hand-finishing, Lucille's costumes are all hand-sewn. Hawley argues that you can really see the difference in how the costume sits against the body. 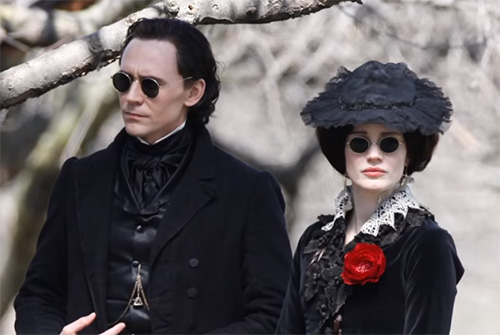 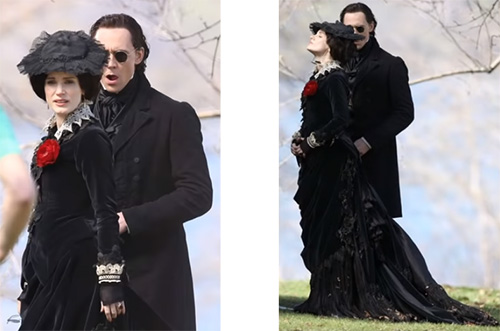 Based upon the silhouette of Lucille's gowns and in stark contrast to Edith's contemporary look for the time, it would put her costumes in around 1877-1883. This period of time was referred to as the Natural Form era, a time when the bustle virtually disappeared, the bodices were longer, and higher heels became very fashionable. 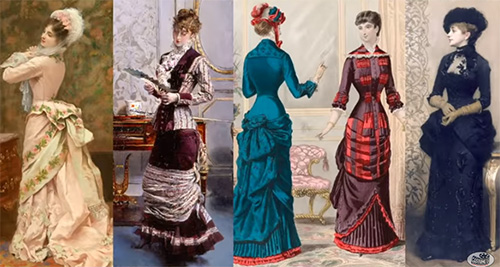 It would make sense that Lucille's gowns, while still exquisite, would be decades old since the Sharpes are virtually penniless and she would not have the money to purchase a new frock.

This 1880s silver dinner gown is an example of the silhouette from the Natural Form era.

The leaf motif that ornaments Lucille's bodice and overskirt took a team of 8 stitchers several weeks to make. The motifs, a type of passementerie, are used again on Lucille's blue velvet gown in Allerdale. 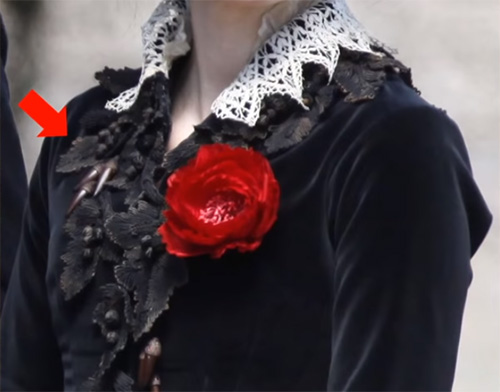 Soutache braid and passementerie appliques were a common decoration used in the Victorian era. The word “passementerie” originates from the French word “passement”, meaning “lace”, and is the art of making elaborate trimmings or edgings of applied braid. On the left, is a midnight-blue Victorian dress circa 1880-1885 with passementerie cord detail trimming covering the entire bodice. On the right, this Victorian coat from 1895 is decorated with black cotton passementerie braid on the front lapels, around the collar edge, and down the center front. 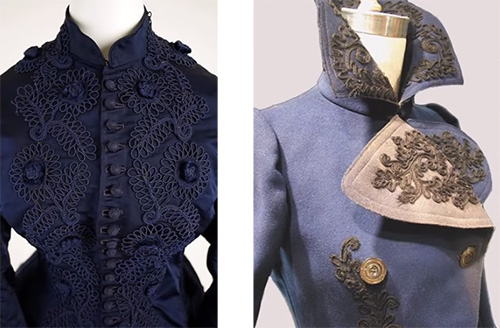 Her collar and cuffs are trimmed in ecru bobbin lace. 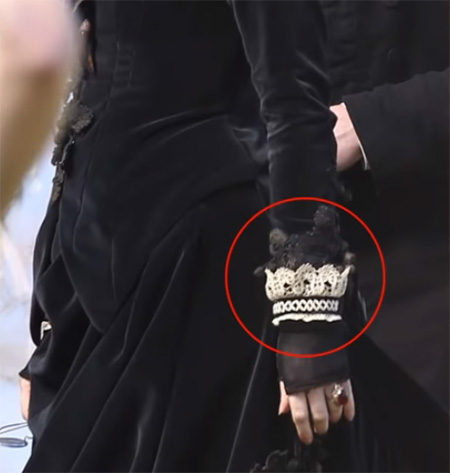 Here is an example of 19th-century handmade English Bedfordshire Maltese bobbin lace trim, similar to the one used on Lucille's bodice. 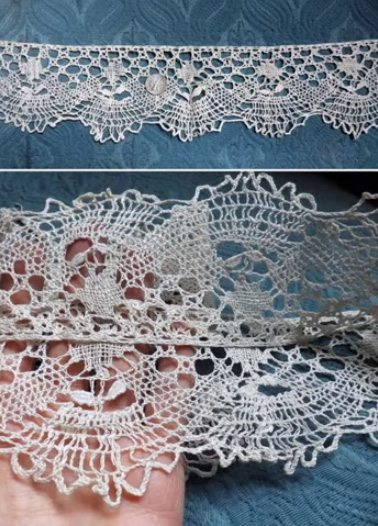 Other forms of passementerie include these Victorian tassels that we see hanging from the leaf motifs. 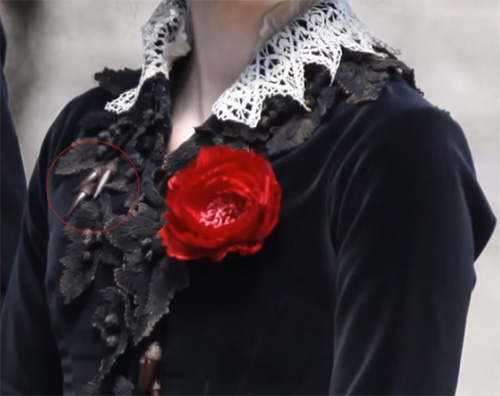 Here are two examples of vintage passementerie. On the left, is an antique French bronze metal tassels made in the 1920s, and the Victorian tassels on the right, like the ones on Lucille's gown, are inspired by nature.

Continuing with the architectural theme, you'll see that Lucille's hat looks like the face of a gargoyle. You have to look closely at the final result to see it. 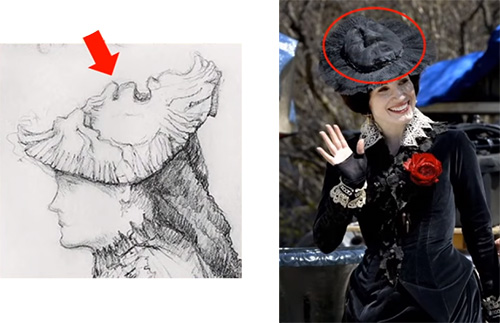 Here is a Victorian woman's silk wide-brimmed hat from the 1890s. This hat is constructed from black ribbon and it's decorated with jet beads. 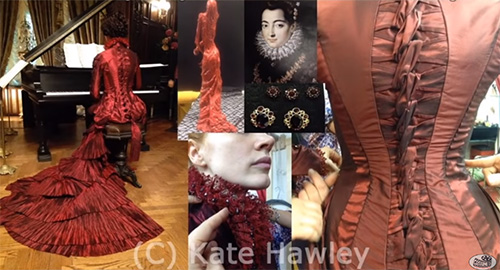 The designer explains that the red dress was a last-minute addition. “That was a pretty full-on dress, one of the last ones we did”, she says, “Guillermo [Guillermo del Toro, film director] and Jessica [Jessica Chastain, actor who played Lucille Sharpe] decided that we needed another dress, and we had, like, two weeks. It was trying to get the right reds and the detail, the lacing was about trying to feel like her spine. I was looking at pictures of starvation in the world of Allerdale, and Jessica is a beautifully curvy woman, if you see her in person, she's actually quite voluptuous in a petite way, but I wanted to get that sense of bone, so we did that with colors. We wanted to bring in the Jacobean tragedy world of the house to costumes”.

In a close-up look of the back on the left, you can see that the way the bodice is laced up, the back gives the illusion of the spine. On the right, is a picture of one of the ghost creatures from Crimson Tide, in which Kate Hawley took inspiration. 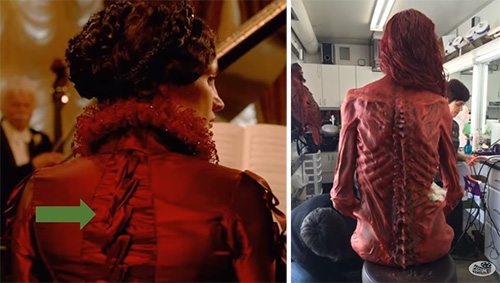 According to Hawley, the train is supposed to represent a pool of blood, with the rows of red silk taffeta pleated with the treebark pleat. 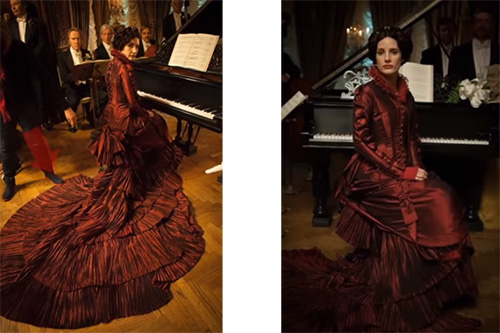 In a close-up, we see the detail of the collar, similar to an Elizabethan ruff, complete with hanging beads. 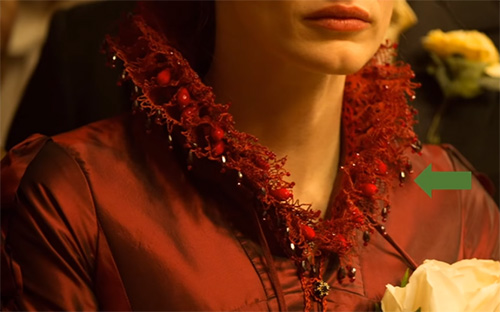 Here is a Spanish Renaissance painting of Infanta Isabel Clara Eugenia by Alonso Sanchez Coello from 1579. The model wears a similar ruff, an item that was designed to keep the gowns clean, as the starched ruff could be laundered in between wearing. On the right, is a close-up and you can see that the ruff is formed by pleating the lace in a “figure 8” formation. The technique is called “cartridge pleating” and was a popular technique during the Elizabethan period. 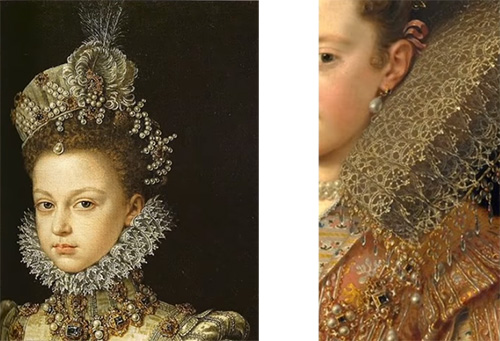 Here is a diagram that shows how the pleating is done and then how it is attached to the band. This is also a technique for attaching full skirts to a narrow waistband.

Modern bodies, which are very different from the period body, Kate explains, adding that for Jessica Chastain, the weight of her wig plus the constriction of her corset actually caused her a lot of pain. Wearing these things for hours every day and a heavy wig pressing on your forehead can cause headaches. They tried to relieve the pressure, of course, but Jessica was amazing – she used that discomfort for her performance in the character as well. 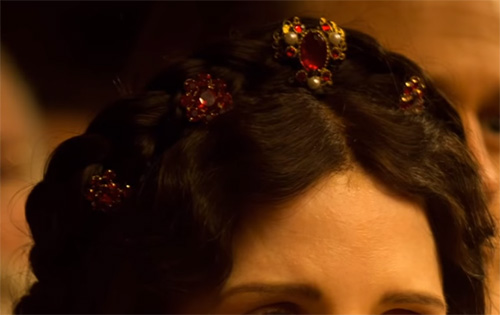 Here is Kate Hawley's mood board for Lucille's midnight-blue costume. You can see both the historical and contemporary influences.

The gown took six weeks to make after prototyping. The bodice, apron, and train are constructed from a sumptuous blue velvet silk fabric. The underskirt is silk taffeta. And the pleated hem, collar, and cuffs are made from Dupioni silk, highly lustrous fabric with irregular slabs or bumps. 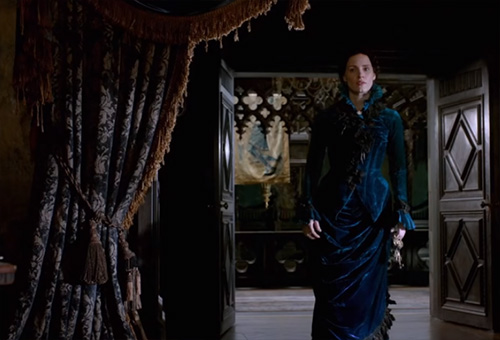 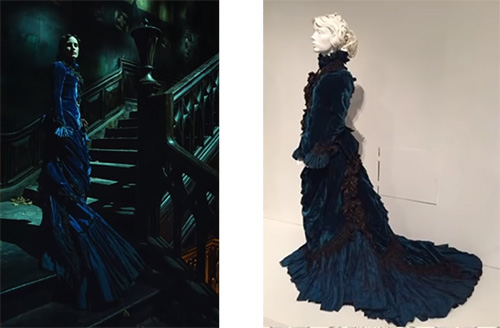 Here is the same gown but without the apron and bustle. As you can see, the taffeta underskirt is smooth in the front, with tiered layers of ruffles to support the weight of the silk overskirt. The taffeta has a two-tone effect in a weaving technique known as “shot”, where two different colors of threads are woven as weft and warp to create the iridescent appearance. 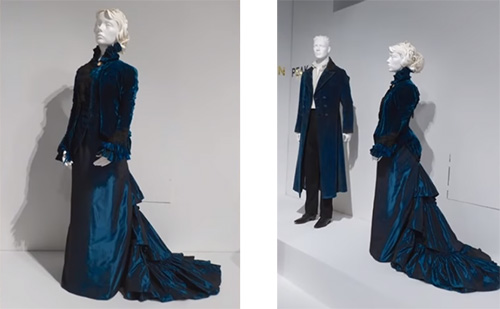 It's hard to tell but it looks like the hem was pleated in an irregular pleat, like the treebark pleating of her red gown. 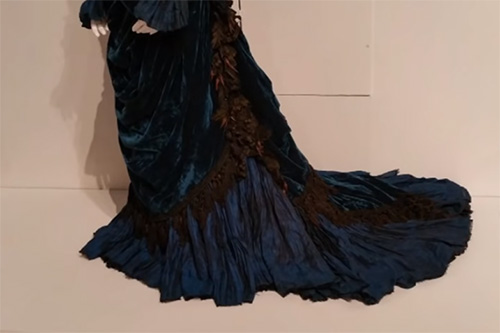 Lucille's gown has pleated collar and cuffs. The pleating looks like treebark pleating, but it could also be accordion pleating. 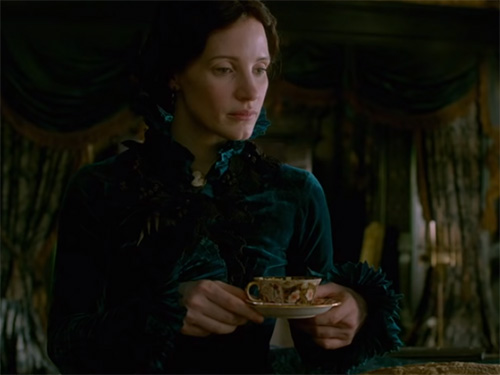 Kate Hawley's team constructed the corded vine trim. The designer said, “All the details we made and they all came from the symbolism of the characters or the house itself. The leaves on Lucille's dress were constructed by hand with a single piece of cording”. 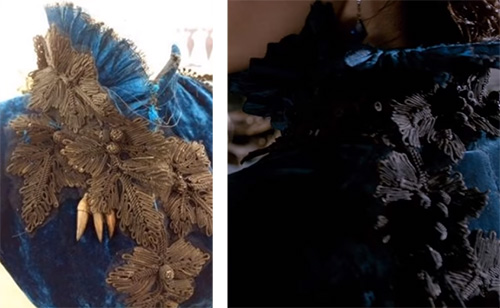 The image on the left makes the leaves look like dark gold but they are actually closer to the image on the right. The leaves had been distressed to show some light damage, which would be understandable given the estimated age of the gown.

Here is a good look at the amount of appliques that trim not only the center front and sleeves but also most of the center back section of Lucille's bodice. 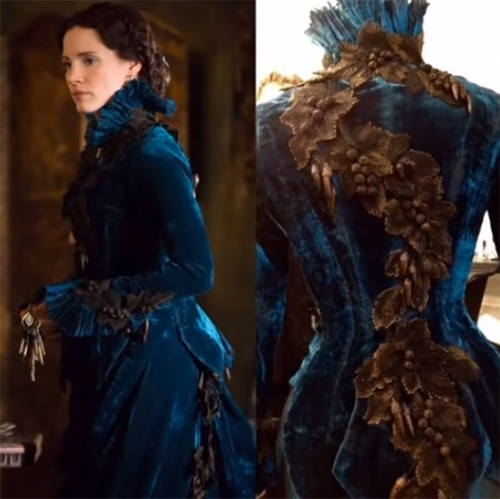 In these set images, we get a glimpse of Lucille's foundation garments as actor Jessica Chastain walks to set. She wears a pretty sheer camisole underneath.

Here is a great shot of Chastain from a bit that didn't make it into the final cut. This longer-style corset has a front bust closure and is grommeted and laced up the back. The underskirt is flat in the front, with ruffles in the back, reflecting the silhouette of her gowns. 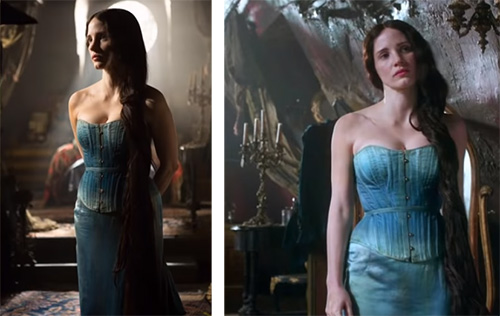 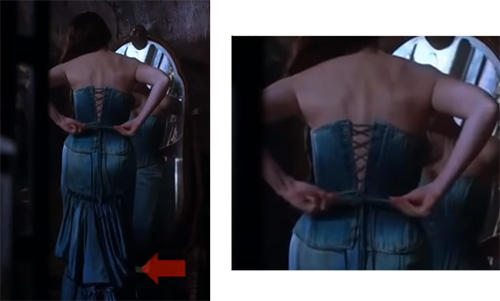 In this close-up, you can see the many bone channels in the corset, it’s what gives the hourglass silhouette. The corset has been broken down, the fabric faded, soiled, and stretched from years of use. An important note: the corset would always have been worn over a chemise to keep it clean. 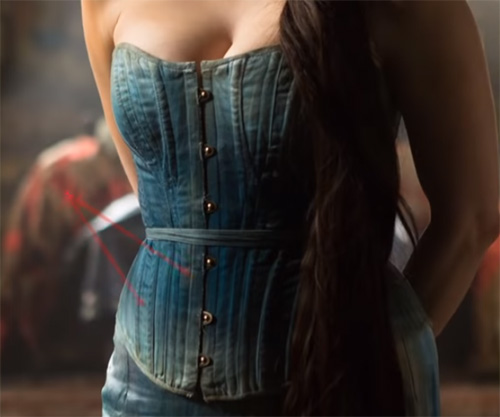 Lucille’s style of corset is similar to this silhouette from 1875 when the course has changed from the earlier crinoline silhouette to a longer, sleeker shape. This new corset shape helped to flatten the stomach and smooth the hips. In the painting “Nana” from 1877 by Edouard Manet, we see this style of corset on the model. On the right, is an exquisite French corset from the 1880s made from blue silk satin, a steel busk, and boning. 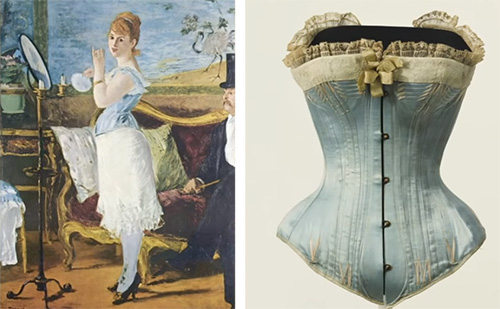 This is Lucille's nightgown made from yards and yards of what looks like silk chiffon, and it's trimmed with scalloped bobbin lace trim around the shoulders.

The silk overrobe is made from hand-dyed paper silk. Lucille has fastened it into place with a scarlet ribbon. 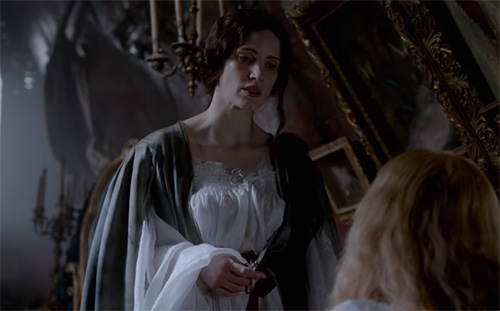 On the left, is a close-up of Lucille's gown, and on the right, is a sample of the smocking technique.