In New Zealand, there is no single official national dress, every ethnic group uses its own folk costumes and has its own clothing traditions. But among the most popular traditional outfits of New Zealand are Māori costumes. These garments, accessories, and jewelry pieces are made from local plants, animal skins, bird feathers, etc, so they’re truly unique and characterize this island country perfectly. Let’s find out how Māori folk clothes look like.

The Māori are the indigenous Polynesian people of mainland New Zealand. Their ancestors moved to New Zealand somewhere around 1320-1350. The Māori culture is so interesting because it was formed in isolation on New Zealand island.

The Māori traditional clothing was formed on the island as well because when the ancestors of modern Māori people came to New Zealand on canoe boats, they couldn’t bring a lot of things with them and were forced to acclimate to new conditions and use locally available materials. They learned which plants and animal materials suited better for their purposes and created clothes from them.

What materials did Māori use to make clothing?

They were rather inventive, but the main plant fibers were harakeke (local New Zealand flax), cabbage tree, and various grasses – Māori wove fabric from these. If to talk about animal materials, a wide variety of animals and birds can be found in New Zealand, their skins and feathers were great to create clothing, headdresses, and other pieces. The skins of seals and kurī (Polynesian dogs that are now extinct) were very popular.

Did Māori use a lot of clothes?

Many people think that aboriginal tribes didn’t wear a lot of clothing, only a few loin cloths and grass skirts. But actually, the Māori clothing traditions are more complicated. They wore a number of garments to cover their nudity, protect the body from bad weather conditions, and even show the status of the wearer. Of course, they used loin cloths and grass skirts, but not only them.

Photo from Wikimedia.org. Courtesy of Governor General of New Zealand

One of the most treasured and important items of clothing was a cloak – it could tell you a lot about the owner, including his or her status, origin, wealth, etc. There were cloaks worn only by chiefs – kurī cloaks (made from skins and fur of kurī dogs), kaitaka cloaks (woven from fine linen), and full-feathered cloaks.

Under the cloaks, women used tops to cover their chests and skirts to cover the lower body, men wore loin cloths and skirts woven from grass and other plant fibers. Also, there were short rain capes that protected people from the rain.

Did Māori use shoes or walked barefoot?

Most of the time, they walked barefoot. Of course, we’re talking about old times here. Though sometimes, they used sandals when they had to walk on harsh grounds (with sharp rocks, thorns, etc). These sandals were woven from flax, mountain grass, or cabbage-tree leaves.

Was weaving one of their main clothing crafts?

Māori were skillful weavers. They used plant and animal fibers to create everything they needed – from clothing to household items. The traditional hand-weaving techniques were widely used in New Zealand up to the first half of the 20th century.

What hairstyles did Māori wear?

We don’t know much about Māori traditional hairstyles. But we know that men wore various topknots (by the way, you could tell the origin of a man by his hairdo) and women dressed their hair with oils, ochre, decorative combs, feathers, and other decorations. Males dressed their hair as well, they actually were the first to use combs, feathers, and pins Māori considered hair to be a sacred part of a body. 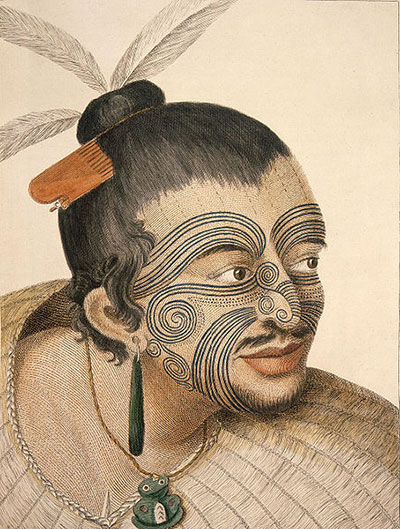 Portrait of Māori man. You can see his hairdo, hair adornments, body tattoos, and jewelry. This is a hand-colored engraving by Thomas Chambers after original artwork by Sydney Parkinson

Did Māori have mourning clothing?

Generally, mourning was shown by the hairstyle and headdress. There were specific hairdos worn only during mourning. Wreaths made from greenery and large black mourning caps were used to indicate mourning as well.

Did Māori wear jewelry and what kind?

Māori had a lot of adornments, all of them made from natural materials, obviously. They were necklaces and pendants made from wood, stones, bone, etc. Wooden necklaces could be oiled with aroma oils. Also, there were earrings made from feathers, bird tails, or even live birds.

Māori were and still are rather close to nature. They use natural materials smartly and preserve old traditions, which are so unique and interesting. It’s great their culture survived and shows us the diversity of traditional costumes around the world.