The folk clothing of Palestine is extremely rich in embroidery. By the way, the traditional embroidery is called “tatriz”, and it adds a distinctive Palestinian flavor to any dress. The complicated history of Palestine had a considerable influence on the national costume and clothing traditions of this country. But luckily, in modern times, the traditional outfit of Palestine experiences its flourishing. There is a boom of tatriz and Palestinian traditional garments within the country and far beyond its borders. Local manufacturers and Palestinian and Israeli merchants work hard to advertise these folk costumes and export them to every possible interested country of the world. So, let’s try to find out a little bit about this extraordinary folk clothes.

The materials were provided by the Embassy of Palestine in Ukraine

Palestine can be divided into three geographical areas according to the clothing traditions (as well as the climate, occupation of the local population, and other customs and traditions). The coastal region is characterized by the Greek motifs in the folk dress. In the highlands, people use a very small amount of embroidery because the women in this area are busy working in the fields and don’t have enough time for embroidering. And the central part of the country, especially the big cities, is very rich in embroidery because the females in this region have plenty of time for the traditional crafts. 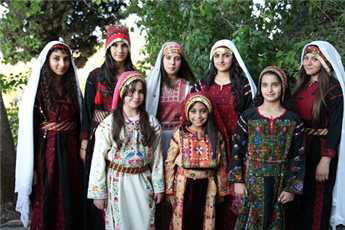 Palestinian girls in the national costumes

But it doesn’t matter what area is the person from, almost every city, town, or village has its unique design of tatriz. They differ in pattern, color, embroidery technique, fabric, etc. At least, a great difference used to exist until the middle of the 20th century. After the 1948 (Palestine war and Palestinian exodus), the diverseness in Palestinian national costume almost disappeared. But luckily, in modern times, the traditional outfit of Palestine experiences its flourishing. There is a boom of tatriz and Palestinian traditional garments within the country and far beyond its borders. 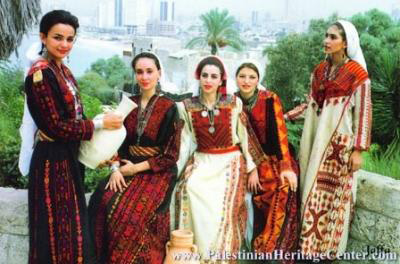 Some of the unique features of the folk costumes from different areas of the country are still intact these days. But mostly, it concerns the female clothes. In some cases, the color of choice shows the origin of outfits. For example, the folk dresses of Ramallah are traditionally made in burgundy. In other cases, the material and color matters. E.g., in Nablus, the traditional dress is made from linen and silk and embellished with green and red lines. The patterns of tatriz on the traditional clothing often express the nature of the region and local sights. The embroidery designs in mountain areas are different from those in desert areas. In Jericho, the female folk dresses are adorned with large amounts of embroidery, often several layers of tatriz are used. In Bethlehem, there are many variants of national attire. For example, a bridal gown can be made from silk decorated with bright flowers and plenty of embroidery on the upper part. It is worn with a special bridal headdress embellished with gold coins, silver, and coral elements.

Historically, the national women’s outfit of Palestine consisted of a wrap-around cloth, a cloak, a scarf, and a shawl. Later, females began to use loose dresses or robes called “thob” and various jackets. But they still covered their heads with veils and headdresses. 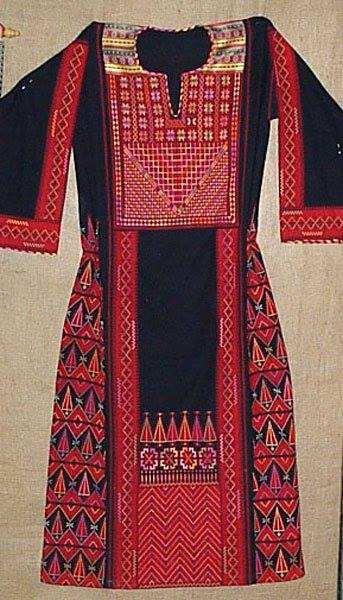 The cloak worn by Palestinian women was called “malliaia”. The fabric and color were the same as for khabara but it had sleeves. On top of malliaia, women wore a waist-long cloak with a hood called “burnous”. 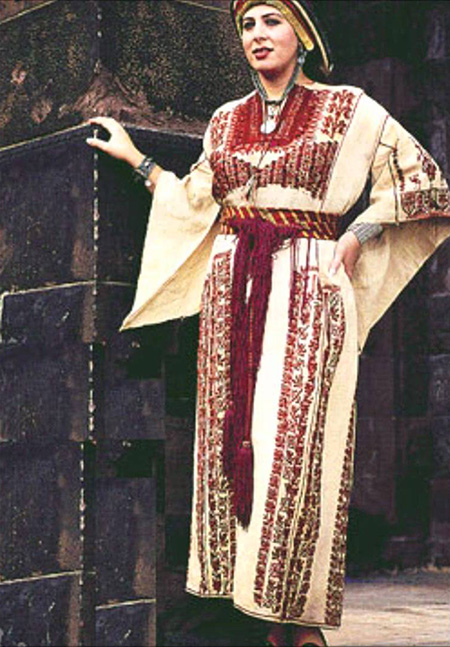 The basic thob was a long loose garment with long sleeves. Its cut and decorations depended on the region of origin.

There were several kinds of jackets used by Palestinian women: “taqsireh”, “jubbeh”, “jillayeh” (“jallayeh”), etc. They had different design and embellishments, depending on the region of origin as well. 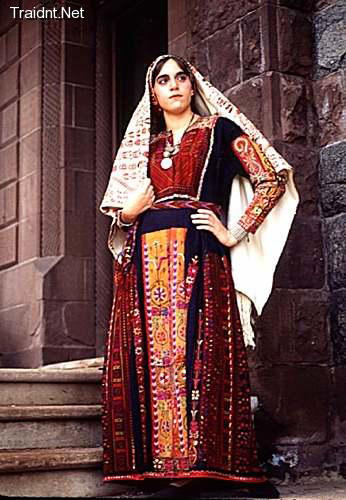 The traditional headdress of Palestinian females also depended on the area of origin. Among the most popular and well-known, was a scarf with a floral pattern called “Bushnika”. A silk or woolen shawl was worn over the bushnika. In some parts of the country, married women wore tarbush (a red hat similar to the Ottoman-style fez) decorated with coins. Unmarried girls often used a kind of bonnet to cover their heads. Though, among the most widespread, remained different variations of a veil.

Jewelry was a very important part of a female set of clothing. Traditionally, Palestinian jewels were made from silver. A lot of various pieces were used: necklaces, chokers, bracelets, anklets, rings, nose rings, etc. Local blacksmiths were very skilled and made masterpieces from silver. Also, jewelry made in Egypt and Syria were imported to Palestine. Some pieces were used as just an embellishment, others served as talismans and amulets. Many adornments included chains and coins, others were wide silver bands. In the 1920s, gold jewelry appeared at the Palestinian markets, and women started to use gold instead of the traditional silver. After the 1948 (as you remember, Palestine war and Palestinian exodus happened then), lots of Palestinian women sold out their family jewels to survive. Today, too few vintage pieces of the traditional Palestinian silver jewelry are still used or even exhibited in museums.

The traditional costume of Palestinian men historically consisted of an undergarment, a kaftan, baggy trousers, an outer garment, a belt, and a headdress. The male outfit wasn’t diverse and colorful as women’s one but nevertheless, it still could tell a lot about the wearer. For example, you could find out his status, approximate age, and region of origin.

The undershirt was called “qamis”. It was made from white or beige cotton or fine wool. Qamis was long (in some areas, knee-length and in other, ankle-length). The sleeves also were long.

The Palestinian male kaftan was a long robe. It was tight-fitting at the top and widening a bit to the bottom. One flap of the robe was put over the other. The collar was round. There were also long slits at the sides of the kaftan. This garment was called “qumbaz”, “qibar”, or “dimaya”. Summer qumbaz was linen. The fabric could be dyed any color; striped cloth (especially, with white&blue stripes) was also used. Winter qumbaz was made from wool; Palestinian men wore it over a white qamis. 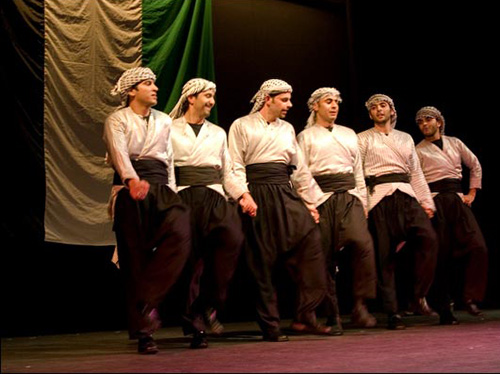 The Palestinian baggy trousers were called “sirwal” or “shirwal”. They were long and wide, tied with a cord at the waist. The color of the fabric was usually black, dark blue, or white. The material was cotton.

Male outerwear in Palestine was long-sleeved “jubba” (“damer”) or short-sleeved “salta”. Jubba was a short garment with long wide sleeves. Salta was the same but with short sleeves. Both garments were worn over a qumbaz.

Another variant of an outerwear was a cloak called “abaya”. This garment was festive and made from a fine fabric (any color of the fabric could be used). It was worn on top of a jubba and qumbaz. Abaya was used by both wealthy and poor people, and it always had to be high-quality. There were plenty various designs of the abaya. One of them was called “bisht” – it was a short abaya with long sleeves.
Palestinian men wore fabric and leather belts called “hizam”. Wide belts were called “lavandi”. 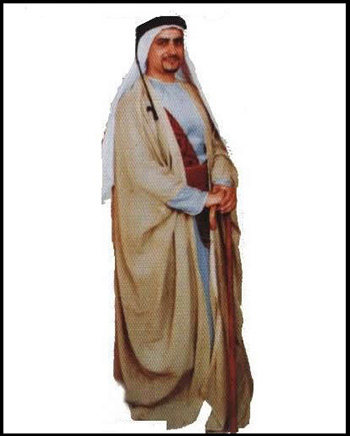 Until about the middle of the 20th century, Palestinian men used to go barefoot or wore simple leather shoes. Usually, the shoes were made from red or brown leather.

There were several different headdresses used in Palestine but the most famous and popular was a kuffiyah. The Palestinian kuffiyah was a large scarf worn around the head and neck. It was used by both men and women. Historically, this piece of cloth served to protect the head from the hot sun in summer and the cold in winter. A kuffiyah had a checkered black and white pattern that used to symbolize the simplicity of a village life in Palestine. Since 1936, this pattern turned into the symbol of a struggle of Palestinian people against conquerors and enemies. At first, local activists wore kuffiyahs to cover their faces during the Arab Revolt – uprising against the British administration (during almost 30 years Palestine and Israel were under the administrative rule of Great Britain). Soon, this headdress became a symbol of Palestinian nationalism. Until today, kuffiyah is used as a symbol of Palestinian solidarity.

There were also other headgears used by Palestinian men. They were a tarbush (a red hat similar to the Ottoman-style fez) worn with a laffeh (a piece of silk or cotton cloth wrapped over the tarbush), a hata wi ‘agal (a large square piece of silk or cotton cloth that was held in place on the head with a help of agal, a circle of cord), and a taqiyyah (small cotton skull-cap; it was often worn under the hata wi ‘agal). 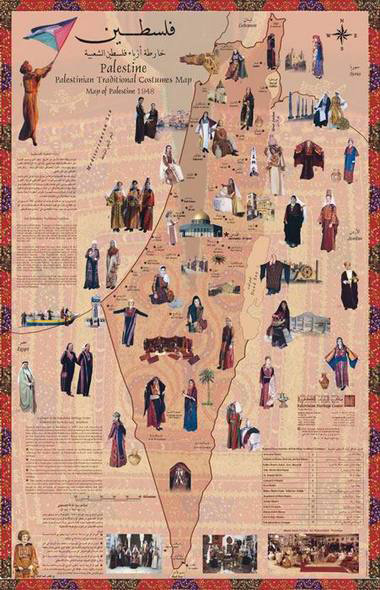 Palestinian traditional costumes according to the region of origin

As you could notice in this article, the Palestinian traditional costume and clothing traditions of this country are intertwined with the historical events. So, if you want to better understand the folk dress of Palestine and find out more info about it, we advise you to learn more about the complicated and entangled history of this nation. 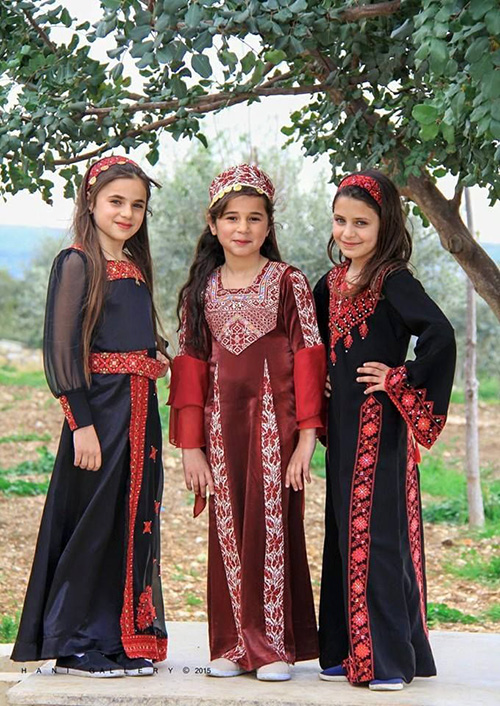 Girls in modern variants of Palestinian folk costumes. The dresses are decorated with the traditional embroidery of Palestine called “tatriz”

Why arent there any examples of Palestinian style or clothing prior to the 1920’s?

We will work on it. Thanks for your comment

Why arent there any examples of Palestinian style or clothing prior to the 1920’s?

We will work on it. Thanks for your comment
Quote
#1 Rumpleforeskin 2018-12-18 23:01
Why arent there any examples of Palestinian style or clothing prior to the 1920’s?
Quote
Refresh comments list