Yemeni traditional dress. Yemen is a country with a remarkably diverse fashion

The ancient culture of Yemen has a lot to present to tradition lovers all around the world and people who are fond of vintage national clothing. This country has some magnificent pieces of outfits; some of them are still in use while others are almost completely forgotten. The most interesting are vintage handmade garments with lots of colorful embroideries, intricate gold jewelry, pieces made by a unique Yemeni tie-dyeing technique, and traditional daggers that always complement the male costumes.

The first thing you should know about Yemen is that there are 3 main ethnical groups in this country: the mountain people (they live in the North Yemen), the coastal people (they live in the South and West Yemen), and the Bedouins. These three groups differ in the cultural characteristics, customs and traditions pretty much. So, the folk dresses of these territories also vary.

People in Yemen are engaged in many handicrafts: embroidering, weaving, jewelry and metal work, producing baskets, decorative objects, and souvenirs, pottery, indigo and tie-dyeing, making stained glass and etc. Several decades ago they used to wear handmade clothing with handmade decorations. Today a lot of people buy their clothes or use modern machines to make it. Modern technology has become a blessing and a curse at the same time. It is much easier to produce and get all garments you need nowadays. Also, many new fabrics are made and used with the help of modern technology. Though, the progress caused the disappearance of some pieces of outfits, clothing traditions, and techniques of making national costumes. For example, the famous Yemeni striped cloth is no longer produced. Some kinds of national dress used in certain regions of the country disappeared as well.

Still many traditional pieces of clothing used in Yemen are popular and in use nowadays. Let's take a closer look at the national costumes of this country. We should mention that one of the main features of Yemeni traditional clothing is the great diversity. Yemeni writer Dr. Abdulaziz Al-Maqaleh said, "Without exaggeration, I can say there is nowhere in the world with more diverse fashion than Yemen".

Yemeni men often use the Western-style clothing today. Suits, shirts, and T-shirts are rather popular. But some men wear the traditional Yemeni attires: thoobs and futa skirts.

Thoob (also called "thawb" or "thobe") is a loose ankle-length garment with long sleeves. Such robe-like garments are common among Arab countries, and Yemen is no exception. Traditional Yemeni thoobs are white, beige or brown. Light colors and natural fabrics are used to cope with the hot sun. Thoobs are mostly used by tribal people from the North of the country. This garment is rather formal.

Futa is a wrap-around male skirt. It is an informal type of clothing. Futa is also used mostly by tribal people from the North. Another variant of futa is called "ma'wazz". Ma'wazz can be worn at the formal occasions, like weddings etc. Futa and ma'wazz are usually handmade. They can be of any color and pattern (striped, checkered and so on). These garments are rather convenient, that's why they are popular among Yemeni men. 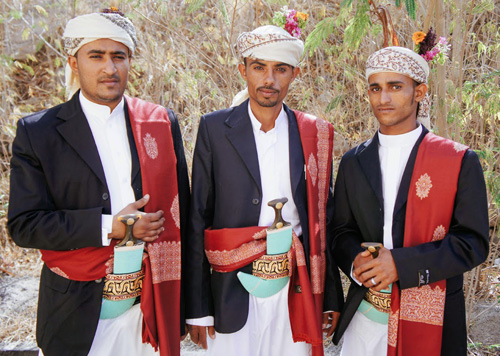 Men in Yemen mostly wear headgears. There are plenty of different headdresses used in this country. The most popular and widespread are the turban and the alqaweq. Most of the people in the world know something about turbans. It is a headdress made by simple winding a long piece of cloth around the head (at least, it sounds simple – this process is not so easy for beginners). There are many styles of wearing the turban, as well as many variations of fabrics used. If to talk about the alqaweq, this headgear is much more mysterious for people outside Yemen. Usually, turbans are worn around the alqaweq – it is a kind of auxiliary hat. Though, it can be worn even without the turban. The alqaweq is made from cloth or straw / bamboo. The former is used by children and poor people while the latter is worn by old men and wealthy Yemeni. Headdresses in Yemen are very important accessories. In the past, there were even class divides by the headgears. Today such divides no longer exist, but usually you can tell a lot by the headdress of a person.

Traditional Yemeni shoes are made only from the natural materials. It is mostly leather. The shoes of Yemeni men can be slippers or low shoes (with the back part). Nowadays the traditional shoes are seldom worn in Yemen; usually, people who use folk costumes wear them.

Men's Yemeni national costume can't be imagined without a jambiya – famous Yemeni dagger. It is placed vertically at the center of a wide ornate belt. Jambiya is a curved dagger with a medial ridge; it usually has a very beautiful sheath with exquisite carving, gems, precious metals, and ornamentations. Jambiya is a ceremonial dagger; they are also used by traditional dancers and during dancing at the weddings.

Yemeni women mostly wear very colorful outfits. A lot of Muslim women prefer dark colors, so you can often meet females in black hijabs, abayas or veils at the streets. But still much more women use bright-colored clothing with a lot of embroideries, jewelry, and decorative elements.

There are several universal dresses used by Yemeni women all around the country, but mostly each region has its typical traditional attire.

One of the most popular female clothing in Yemen is the traditional Sana'ani curtain-style dress. It is a brightly colored square-shaped cotton cloth wrapped around the body. This piece of cloth is called "Al-Masoon". Another obligatory part of Sana'ani dress is a separate cloth that covers the head, it is called "Al-Momq". It is mostly black with red and white inclusions. Al-Momq is made from silk or cotton. Married women often add another piece of clothing, called "Amomq". It is an additional head piece embroidered with silver or coral colors. 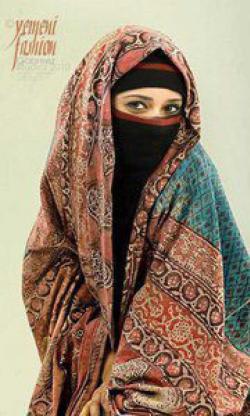 Women in many regions of Yemen wear Sana'ani dress. It is an ancient tradition that goes from generation to generation. There is a very interesting story about the history of this outfit: in ancient times, women grabbed curtains (which were used as a decoration of the old Yemeni houses) and wrapped them around their bodies when someone visited their home. Later they began to make Al-Masoons specially to wear them. It has become a tradition that has spread around the country. Nowadays curtain-style dresses are often replaced by modern abaya (a kind of robe-like dress used by Muslims), but a lot of women wear Sana'ani dress even now in day-to-day life.

There is another universal dress called "Zina" (it can be translated as "beauty" or "ornament"). It is also very widespread in Yemen. Zina is much alike to the Western-style dress of 1940's – 50's. It is a loose knee-length or bellow-the-knee length dress with long sleeves and V-neck. Zina is mostly worn with baggy trousers. It is often embellished with embroidery, paillettes, patterns on fabric and other decorations. But this attire is made for everyday usage, not festive.

Yemeni women mostly cover their heads. Those who live in urban areas wear veils and scarves on a daily basis while women from rural areas sometimes go out without covering their head. There are plenty of different pieces of clothing used to cover the head: veils, kerchiefs, scarves, hijab, straw hats, and other specially designed garments. It seems like Yemeni women know 1000&1 way to tie a headdress. When you're at the streets of Yemen you are stunned by the diversity of headgears on locals. And while male headdresses are less diverse, female headgears can be of any shape, color, fabric and even function.

Why the veil and hijab became so popular in Yemen (and other countries of the Middle East as well)? It didn't happen promptly. Some people think that Islam brought hijab to these countries. But, actually, it wasn't so. First of all, veils were used long before Islam – in ancient Rome and Athens. According to Muslim beliefs, Mohammed did ask his wives to cover themselves for protection. But it wasn't some order or obligation for all women to wear hijab at first. Middle Eastern men are rather passionate, so many women began to cover their bodies to protect themselves from pestering. In time, the veil became a sign that this woman is not a slave but a respectful person. Gradually hijab and veil transformed into a status symbol. Wealthy and respectful women got used to wearing them, and after that, all the rest began to cover their bodies and faces, too. In urban areas more women used cover-ups, while in rural areas much fewer people wore them. Even today we can see more hijabs in big cities than in villages. 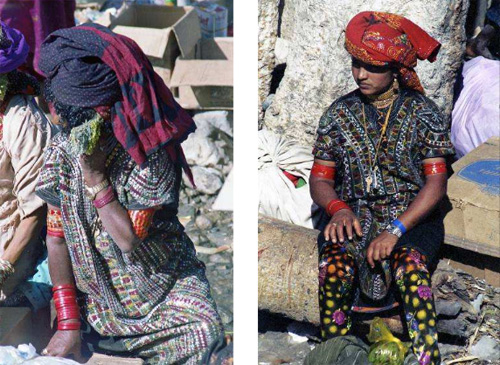 Yemeni women are traditionally in love with jewelry. Of course, most females in the world love jewelry. But in Yemen, it is women's trousseau and treasure. Every bride gets jewelry from her groom (often even before the wedding agreement is concluded) as a gift and the guarantee of her secure future. She has all the right for her jewelry and is able to use or sell it whenever she likes. Even if a couple divorces, the woman keeps her jewelry. Yemeni women wear a lot of jewelry for special occasions. This is the way to show their status and wealth. Most jewelry in Yemen is golden. Silver jewelry is also valuable, but their value depends on the beauty and antiquity of the piece. The more intricate, the more expensive and costly.