Traditional clothing of Mesopotamia. What did it look like?

What did the clothing in Mesopotamian look like? Let's do a Sumerian costume breakdown. Basically, fashion changes when the world changes. And in Mesopotamia, fashion didn't need to change for 5,000 years. When we look at the sculptures or drawings from that era, we see dull and neutral colors and shapes, but was it really so? You’ll find out from this article.

The mainstay of early Mesopotamian fashion was the following. It is called a “kaunake” and it's this sort of a wrap-around skirt, worn quite high on both men and women. On men – just under the nipple; on women – wrapped under one arm and over the shoulder of another. 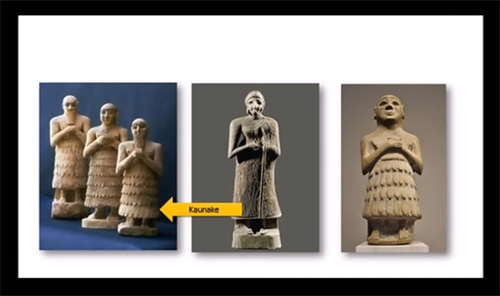 But let's break down the structural elements of Byzantine clothing. You can see, everything was based on wraps at the beginning of this culture. But then, we start seeing tailored garments later on – in the Assyrian era. Garments with sleeves, for example. 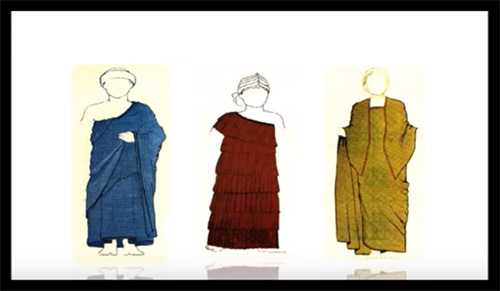 But one thing we know the Mesopotamians gave us was fringe. They were nuts for fringe – we see it on carvings, we see it on sculptures. This was a culture that really used clothing to reflect itself, to reflect status. Fringe on everything – it must have been spectacularly exotic. 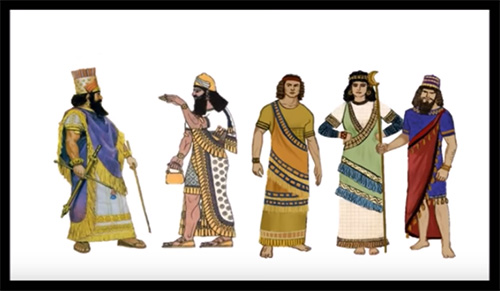 Of course, there was a social strata in Mesopotamia. And, obviously, the people at the top of it – the royals, the aristocrats, and the big-time land owners – used clothing as status.

Take a look at all of these elements of clothing. The man here is wearing a tunic and over the tunic. He has garments that are wrapped around his body. These garments were made of silk, they were embroidered, and they had fringe. 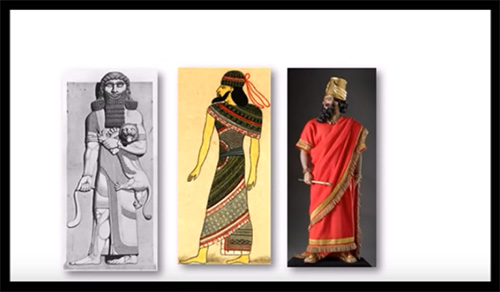 Take a look at the colored middle image here. You can really get an idea that a lot was going on. The more decorations, the more status you had. The image on the right shows us that a lot of gold was used during the Mesopotamian era.

So, this was very flashy clothing. Get away from this idea that people in the ancient world were neutrals – they didn't. Color was so important to them, more important than it is to us today. We all often go around in black, gray, and neutrals – that would not have been very fashionable in Mesopotamia.

But where the Mesopotamians really showed their style was in their jewelry, their work with gold, and their work with bronze. Look at these headdresses and crowns. Obviously, if you were a baker's wife, you did not wear one of these. These were for royals, these were for High Priestesses. But take a look at the detail – the flowers. Flowers were such an important motif in Mesopotamian, Assyrian, and Babylonian fashion. Also look at these incredible earrings, necklaces, and rings. Absolutely gorgeous gold, bronze, stone, beadwork – this is ancient stuff.

To survive on the planet as a human being, you do not need to be wearing a gold crown with leaves and flowers springing out of it. It's not necessary. So, these pieces and the Mesopotamian fashion in general was being used to signify something else – status, spirituality, money, or just good old-fashioned style.

Let's take a look at hair and beauty. Well, so many Mesopotamian sculptures show guys with long crinkly beards and with matching long hair. We know absolutely that these beards were often curled artificially and they were certainly treated with oils. Beards were important to Mesopotamians. When we look through the ancient world, we’ll find that beards signify wisdom. So, whenever you see a beard on an ancient sculpture or an ancient painting, this guy was wise – he was older, he was wiser, he had status. 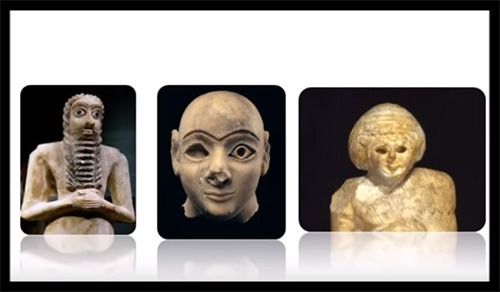 So, we know that beards were important, but so were shaved heads. Look at this guy – he doesn't have a beard, he has a shaved head. And there are a lot of statues like this. Obviously, to shave your head and be clean-shaven, you had to have a status, too. Maybe this hairdo was typical for priests.

Women's hair was certainly quaffed. Mesopotamian ladies seem to wear these kind of bulbous updos. We see it so often that this really was the hairdo of the Fertile Crescent. 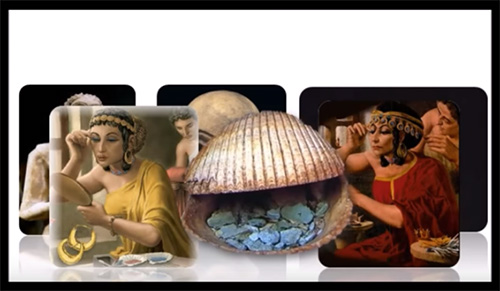 What about makeup? We know they wore makeup, and we're sure that it was extremely exotic, because look at their clothing, look at their jewelry – it was so exotic, it was so flashy that their makeup, probably, was, too. And we know for a fact that they wore makeup because a lot of it has remained intact, like this shell which is full of eye-makeup: a powdered pigment in this wonderful blue (which must have been even more blue 4 or 5 thousand years ago) to use as an eye-shadow. And we know that it went on the eyes because so many of the sculptures, that remain, have detachable eyes and each of them is lined with eyeliner.

Think about it. Anything that's left over from the ancient world has lost its color. Everything is the color of sandstone, or white marble, or granite. Everything is neutral or white.

So when we get this statue from the Mesopotamian era and look at her hairdo – she's a bit like a Princess Leia from Star Wars, isn't it? With these two sort of buns on either side of her ears. When we get a statue like this, it's so easy to forget that her clothing would not have looked like this 5,000 years ago. 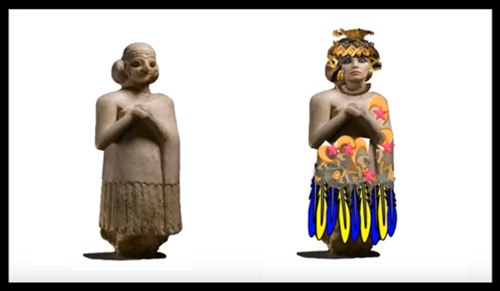 We know that Mesopotamia was alive with color. She must have been ablaze with color because exotic color was so important to the Mesopotamians, the Assyrians, the Babylonians, the whole culture of Sumer. They had incredible gold headdresses, and earrings, and necklaces. And we know they wore a lot of makeup. This was an exotic look. So, when you’re looking at a dull ancient sculpture, remember that it used to be bright, colorful, and eye-catchy back then.