Bavaria (or the Free State of Bavaria) is the biggest state of Germany. And it is a unique territory which differs from other parts of Germany. People in Bavaria continue to keep their traditions (which are rather long-standing) even today, in the 21st century. Bavarian traditional costume is called "Tracht": "dirndl dresses" for women and "lederhosen" for men. And local people wear them with great proud.

If you want to see all the beauty and originality of Bavarian national attire, you definitely should visit the main festival of this region and the whole Germany – the Oktoberfest. This event shows Bavarian traditions, cuisine, clothing, and folklore in all its glory.

Today German people are very modern and pro-European, they prefer ordinary Western-style clothing in day-to-day life. So, Bavarian Tracht very rarely can be seen in the streets in ordinary life. But during national holidays and festivals dirndl dresses and lederhosen become usual garments. They are everywhere. And local people are very proud to wear them and to tell tourists about the German clothing tradition. There is even a saying: "Clothed in a dirndl or lederhosen you are always dressed to perfection". 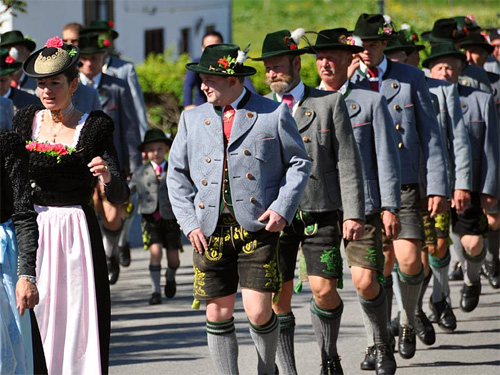 Men in lederhosen at a celebration in Germany. Photo from Sachsenkam.de

Bavarian traditional outfit is one of the most well-known and used in Germany. And it's not just because this state is the biggest in the country. The main reason is the perseverance of Bavarians with which they honor their clothing tradition.

Men's national costume. It consists of lederhosen (short leather trousers), a checkered (red&white / blue&white) or plain white shirt, woolen knee-high stockings, headdress, and shoes. Lederhosen are, of course, the main part of the whole costume. They are short or knee-length breeches. The former are called "lederhosen" and the latter – "bundhosen" or "kniebundhosen". Such trousers are used not only in Germany but in the Alpine and surrounding regions (e.g. in Austria and Switzerland). But Bavarian breeches are different because they have a drop front. Historically lederhosen were used by men for outdoor activities (hunting, riding, hiking and physical work) because leather is cleaned easier than fabric. But over time lederhosen became a traditional piece of clothing. Lederhosen are usually embroidered (traditionally by the girl-friend or wife of the owner). And they surely are a great pride of any Bavarian man. 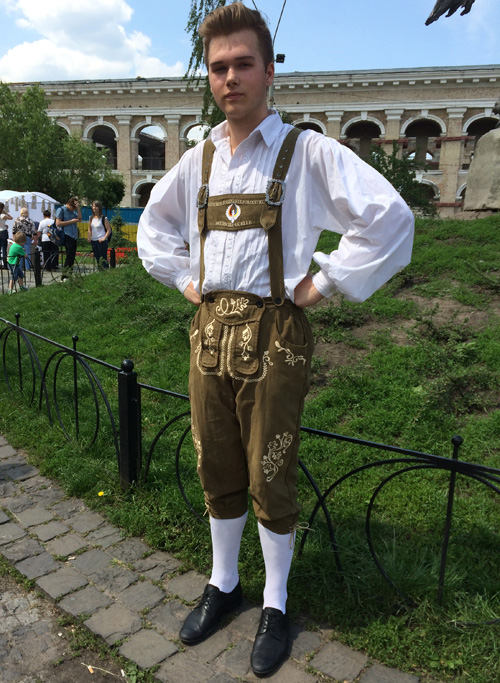 Man in bundhosen (knee-length breeches). The folk costume of Bavarian region of Germany

Bavarian bundhosen (knee-length men’s breeches). You can see the drop-front flap on the photo: it is embroidered and buttoned with 2 buttons to the main piece of the breeches

There are different headdresses worn by Bavarian men, but the most popular is the Tyrolean hat (also known as Bavarian hat or Alpine hat). Classic Tyrolean hat is made from green felt, has a crown tapering to a point and its brim is hand wide. This hat is often decorated with feathers, flowers, beads, and pins.

Boy wearing lederhosen and a Tyrolean hat. Traditional oufit looks on children even cuter than on adults

Women's national costume. The costume is called "dirndl". It consists of a traditional dress (which has a corsage and a wide below the knee skirt), a white blouse, an apron, and a headgear (optional). Nowadays there are many varieties of the dirndl dress and the blouse (which is not obligatory white anymore), but traditionally the whole attire should be of a certain design. Historically it was a working dress of female servants. That's why it was made from cotton and linen. But after dirndl dress became popular among all the classes, other fabrics were used (silk, velvet, satin etc.). Summer dirndl is light, with short sleeves and light colors. Winter dirndl is more worm and heavy; it has long sleeves and is made from the fabric of dark colors. Also, women use waistcoats and shawls in winter. If the weather is very cold they add heavy coats, thick mittens and wool hats to the dirndl dress. 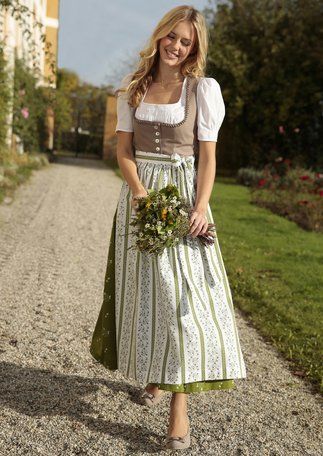 Nice dirndl dress with a long skirt. Photo from Ackermann.ch

Traditional blouse worn with a dirndl dress is usually white. There are different designs, but mostly it has ruffles around the neck and arms. The neckline is often rather deep which makes such blouses very feminine and delicate.

The apron can be either white or colorful. Usually, its color fits other parts of the outfit. 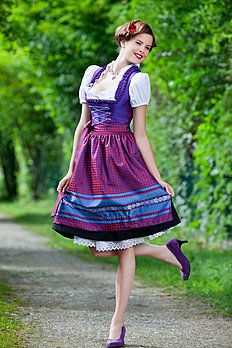 Traditional women's headdress can be various. For example, it can be a headband. Also, women wear felt hats with feathers and beads, similar to male hats. But the most beautiful and outstanding headgear of Bavarian women is a Passau gold-cap. These caps are gorgeous. They are made from golden sequins, foil and threads. Beautiful ornaments are embroidered with golden threads on a golden band. It takes 350 hours to manufacture such a cap. Passau gold-cap is worn on the top of the head. It is worn by Passau women to show the wealth and power of their families. 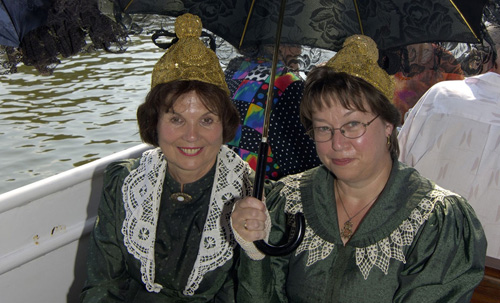 #2 Stanton 2016-05-31 12:47
It’s challenging to find knowledgeable folks on this issue,
but you sound like you know what you’re talking about!
Thanks
Quote
#1 Annetta 2016-05-30 08:48
Oh my goodness! an amazing article guy. Thank you However I 'm experiencing problem with ur rss.
Do’t know why Unable to subscribe to it.
Is there anyone getting indistinguishable rss trouble?