Traditional costume of the Czech Republic. Every region has its folk attire

The national clothing of the Czech Republic is very bright. It is a mix of different eras and styles. Shawls and kerchiefs on the head came from Gothic period when people began to wear various kinds of bandages that covered hair. Pleats and lace collars came from Renaissance era. Bell-shaped skirts and large puff sleeves came from Baroque era. And beautiful Slavic embroidery is typical for all Slavic countries but with some differences.

Today people in the Czech Republic don't use traditional costumes in everyday life, but they wear such clothes on ethnic festivals, carnivals and other national events. In the eastern part of the country this tradition is much stronger.

The traditions in clothing in the Czech Republic are different for various regions. Every region has its own costume: pieces of clothes, accessories, embroidery patterns etc.

It is richly embroidered clothing; not only usual embroidery is used, but beads and sequins are popular. The brightest and richest part of the costume is a large scarf called Blata plena. It is worn over a soft, three-part bonnet.

This costume was formed in the 19th century. The women's shirt is richly embroidered and decorated with beads. Also it has an unusual collar called "výkladek". 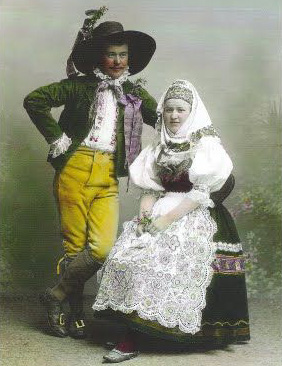 This clothing is plain and simple because this region was the poorest in the Czech Republic.

Men's costume consists of knee-long yellow deerskin trousers (called "praštenky"), blue knitted stockings, shoes with a buckle, a jacket, and a fur coat for cold weather. The jacket can be long or short and is called "bunda". Men also wore hats made of pig's hair and tall like a stovepipe hat. The main decoration of traditional Doudlebsko attire is a wide belt with fine off-white needlework and a solid disc at the front.

Women's costume consists of a close-fitting undershirt, a shirt with traditional sleeves, a red skirt with a large deep pocket and many petticoats, a bodice, and a silk scarf. This scarf is very bright and women compete which of them has the most beautiful one.

This national costume is very beautiful and wealthy.

Men's clothing consists of trousers, a tunic, a waistcoat, a hat, high boots, and a very ornated belt. Also there are a lot of accessories. Pieces of clothes are decorated with colorful embroidery, silver buttons and other elements. Festive garment in Haná region implies a long blue coat with copious pleated collar. Men in this part of the Czech Republic wore long hair.

Women of Haná hid their hair from anyone, including their own husbands. They wore headscarves or white decoratively knitted bonnets. Often women used both bonnet and scarf. 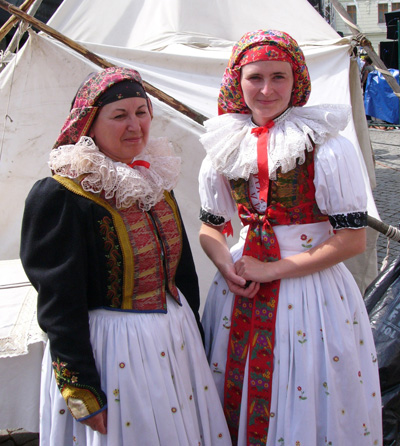 Traditional garment in these regions was rather rich and stylish. Both men and women wore black. Among fabrics brocade and silk are popular. Silver jewelry is used.

The main women's pieces of clothing are a velvet (or made from other material) bodice and a scarf. This scarf is worn in an unusual manner: it was tied on the head, at the nape, and into a crown above the forehead. 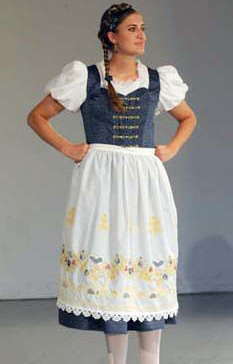 This national clothing is widely used today. People in the vicinity of Domažlice and Postřekov wear wedding dresses that are based on the Chodsko folk costume. There are 3 different kinds of the traditional costume in this region of the Czech Republic: horský (the highlands), dolský (the lowlands) and Stankov costume. The shape of dolský costume is focused above the waist, and horský costume – on the waist. Stankov costume has some elements of town fashion. 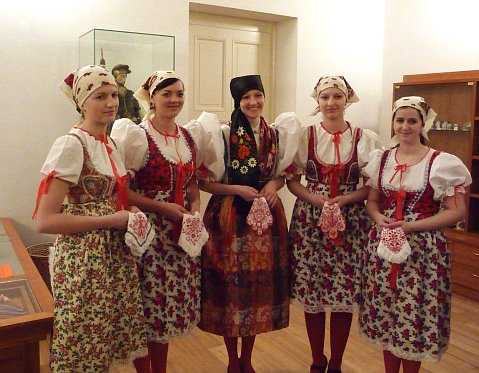 Men's traditional clothing consists of dark long trousers (often tucked into high boots), a white shirt, a waistcoat and a jacket with metal buttons, a period hat (something like a stovepipe hat), and a dark silk scarf under the neck.

The dominant piece of Women' traditional clothing is a bonnet. Every woman should wear it. There were several main kinds of a bonnet. It could be white, ornated and beautiful; embroidery, lace, golden sequins and glass beads were used to make it. Also a bonnet could be made of colorful silk and velvet, with golden embroidery and lace, decorated with rabbit fur. The bonnet in Opava clothing usually had the shape of a medieval hood with elongated ears.

Women's national costume. It is unusually wide, with a great number (up to 24) of underskirts. Usually women used 12-15 underskirts, and a wedding dress could have 24 underskirts. Also the traditional clothing Plzeň region had very little embroidery. But these samples of embroidery are considered to be the most beautiful among folk needlework ever. The women's costume consists of a white chemise (with medium-size bulbous sleeves), a bodices and white woolen jacket, a small silk scarf placed across the breast, red stockings, and carved shoes on thick high heels tied by green riband.

Men's national costume. It was rather restrained. The upper parts of the costume were blue braided in red at the edges. All the parts had fastenings of shiny golden brass buttons. Men wore light deerskin trousers. Boots were knee-high. Also there were several different male headdresses: caps, crowns, stovepipe hats and etc.

Women's national attire consists of a simple shirt, a skirt, an apron, a white embroidered neckband around the throat, a silk scarf, and a thin black velvet ribbon across the forehead. Skirts could be white, embroidered, with colorful apron (red, brown, violet, etc.) or colored with white apron. The length of a skirt was past half the calves. It was wide and gathered into thick folds at the waist. Women liked to wear a silk scarf which they put diagonally on the shoulders, and they tucked the tips of the scarf behind the bodice. Also they didn't wear bonnets. They wore their hair divided into partings, and used a thin black velvet ribbon across the forehead instead.

Men's national attire consists of a shirt, a waist-long jacket, a leather trousers (called "brslenky"), woolen stockings, high boots, and a hat. The shirts had long wide sleeves, frilled at the shoulders. The jacket was short, braided at the front and the neck with red edging, and also it had 2 rows of buttons at the front. Married men wore a long coat with two coattails. As a headdress men used a hat, an otter cap or a round cap with lambskin. In winter they wore fur coats and fur hats.

Region: Slovácko region, in the southeast of Moravia.

In this region the traditional clothing is used very widely even today. A lot of people, especially old women and youth, wear folk costumes partly in everyday life. They even simplified the national attire to wear it in ordinary life.

Women's national garment consists of a short wide skirt, an apron, a woolen or cotton bodice, and a scarf on the head.

Men's costume has very opulent and embellished forms. Men usually wear it only for festivals, banquets and other events. 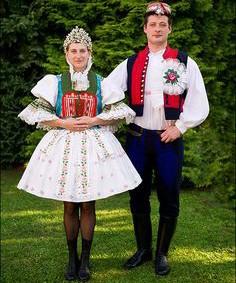 Men's national attire is rather simple. It consists of a thin linen shirt without embroidery, trousers, a silk scarf, a waistcoat, a jacket, a long coat, white or blue stockings, and low shoes. The waistcoat was of a simple cut, it was fastened with a row of metal buttons. The jacket was close-fitting without any without embellishment. The long coat was tight-fitting and extended to the waist, made of dark blue or brown cloth. It had small shoulder boards; its sleeves were broad at the shoulder and narrow at the wrist. The trousers were tight-fitting, made of leather, and tied with a string under the knee. 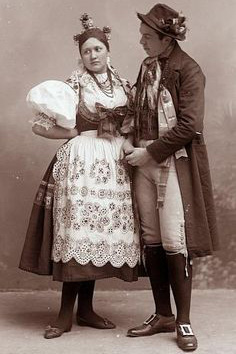 This garment isn't used by people in the Czech Republic today. It almost disappeared. You can find Valašsko folk costume only in museums, and on folk dancers and musicians.

Men's clothing consists of a white shirt, tight trousers, a fur coat, peasant shoes and a hat. Women's attire consists of a bodice with traditional sleeves, a white, roughly pleated skirt, a black apron, and a white embroidered scarf on the head.

Once again, the descriptions are quite inaccurate and misleading. If you are a foreigner that wants to learn about our traditional clothing, please do not read this page.

Thank you for your comments. Could you recommend a source in English (or maybe Ukrainian or Russian) that gives accurate info about Czechian and Slovak folk clothing? We know too few and the text is mostly just copied there. But we would really like to give our readers more accurate and truthful info, as there are lots of children and students who visit our website. Not always, we can confirm the info we find and be sure in it.
Quote
#4 Czechoslovak Folklorist 2021-10-22 12:46
Once again, the descriptions are quite inaccurate and misleading. If you are a foreigner that wants to learn about our traditional clothing, please do not read this page.
Quote
#3 JEAN VAVRA 2021-04-26 01:35
My grandmother was from Dobroniche, I cannot find this village on any maps. Would like to find where this place is located. Any help on this matter is very much appreciated.
Quote
#2 Bobby 2017-10-25 18:37
These are super pretty.
Quote
#1 Emily 2017-10-25 18:36
The outfits are probably the nicest I've seen in Europe.
Quote
Refresh comments list