Have you ever heard about shoes made of fish skin? How many European nations do you know that still wear the ancient national costume on festivals and holidays? Icelandic people are among them. Is it interesting for you to know what material was used to make extraordinary Icelandic high headdresses? Do you want to know what Icelandic product was very famous in Europe and considered to be very qualitative? If your answer is "yes", then you must read this article.

A lot of Icelandic people wear the traditional dress of this country rather often. On every festival, national holiday or big event in Iceland you will see people dressed in Icelandic national costume. And we're talking not only about older people, but youth and children as well.

The national dress of Iceland is called Þjóðbúningurinn. There are 5 types of traditional clothing for women and only 2 types for men.

The most popular traditional men's costume of Iceland is called Þjóðbúningur karla. It consists of a woolen breeches or trousers, a double buttoned vest and a double buttoned jacket (called treyja). A tail cap is usually used as a headdress, but historically there were a lot of various headpieces. Such costume was formed in the 17th century.

In the 19th century, another variant of Icelandic men's clothing was invented. It consisted of a black jacket, white shirt, black knee-breeches and horizontally striped or solid colored white socks. 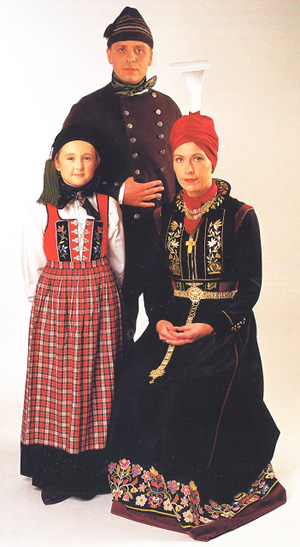 To finish the costume, men wore silk kerchiefs around the neck. Sometimes women also did that.

Traditional Icelandic shoes are alike for men and women. These are leather shoes made of sheepskin or wolf fish-skin. Also, they are worn with woolen inlets, handmade and very beautifully embroidered. Using inlets is convenient because it is very easy to change, wash and dry them.

There are several traditional types of Icelandic women's dress. Since 17th century Faldbúningur is in use. Later, in 18-19th centuries, national dress named Peysuföt was used. These costumes may consist of a long dress, or a long twill skirt and a jacket, or a skirt, apron, shirt, and vest.

But traditional Icelandic dress is impossible to imagine without a national headdress. There are 2 types of headpieces. The earlier variant is a very high headdress that has an unusual amazing form. It is always white. Sometimes it has a conical form but curved forward. Also, it can be flat and curved forward. This headdress was made of linen or very thin wool. Often it was decorated with gold-wire bands. 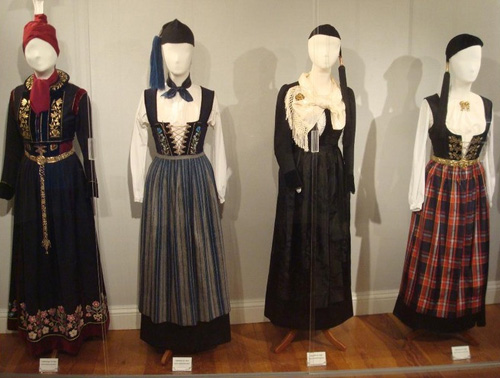 Different variations of national clothing of Iceland. Photo from Thelovelyplanet.net

Another typically Icelandic headpiece is a tail-cap. The cap itself is usually black and the tail can be black, blue, red etc. This headdress is much more comfortable.

Icelandic shirts were white and rather simple. Since linen doesn't grow in Iceland, so Icelandic women had to use another material to make clothes. That's why they made shirts of very thin wool. Actually Icelandic wool was very famous those days, it considered to be one of the most high-quality wools in Europe. 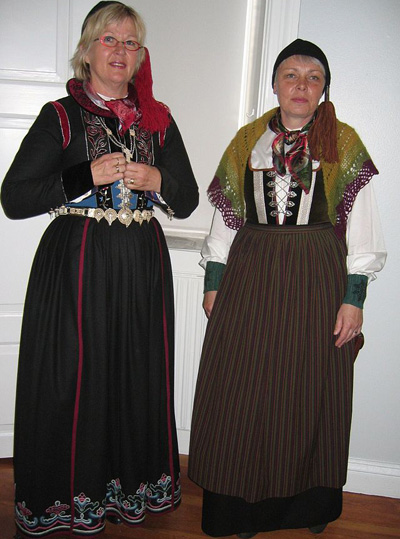 National costume of Iceland is very beautiful because of embroidery and jewelry that are used. Bodices and vests are always embroidered, sometimes decorated with golden or silver elements and golden or silver chains are used as a lacing. Women often embroidered the hems of dresses and skirts, usually fine floral ornaments or split-stitches were used. The dresses were often belted with ornated belts.

Women's shoes were same as men's. 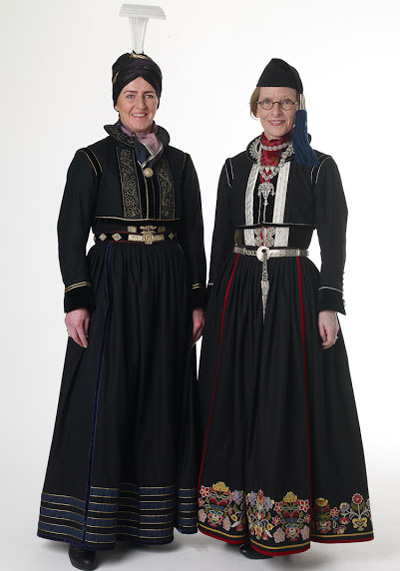