Crimean Tatars have got a very beautiful and ornated national costume. There are only about 2 millions of Crimean Tatars in the world, and about 300 thousands of them live in Ukraine. The history of this people is rather difficult and sad. But still they managed to keep all the most important traditions – language, national clothing, folklore, cuisine etc. In this article you will learn more about the traditional dress of Crimean Tatars, one of the most proud-spirited and bearing nation in Europe.

Crimean Tatars mostly made clothes from leather, woolen or camel cloth (homemade and imported). Some pieces of clothing were made from velvet and beautifully embroidered with gold. Silver and golden decorations are typical for Crimean Tatar national clothing. In general the traditional costumes of this nation are very festive, bright and with oriental motifs.

Male traditional clothing consists of trousers, a shirt, a long and wide belt, a vest, a jacket, a long coat, a hat or fez, and leather boots.

Men mostly wear headdresses. Usually in winter it is a low black hat made of sheepskin, which is called "kalpak". As the majority of Crimean Tatars are Muslims, they often have a crescent moon (the symbol of Islam) embroidered on the bottom of the hat. In summer men wear a skull cap or a red fez. 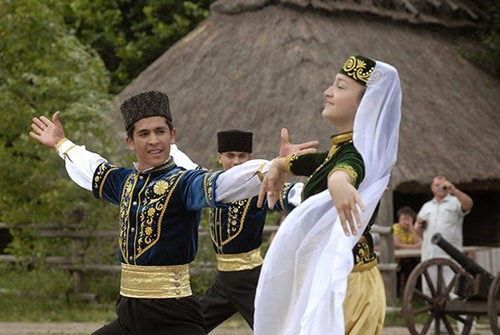 Crimean Tatars wear wide trousers (which look pretty much like Ukrainian "sharovary") made of woolen cloth. They are called "shalvar". The shirt is tucked in and belted with a wide and long belt, also made of woolen cloth. The belt is called "kushak". All shirts were made of thin homemade cloth. On top of the shirt men wear a vest called "ilyk". A jacket with short or long sleeves is worn on top of the vest. Often men also use a long coat. 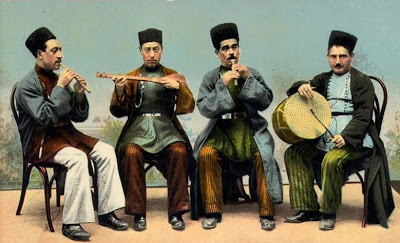 The traditional shoes of Crimean Tatars are "chizmena" (boots that necessarily have horseshoe heels) and "potyuk" (leather shoes with heels and without tops).

Female attire of Crimean Tatars is very feminine and delicate.

The most important piece of female clothing is a headdress. Tatar women usually braid their hair in 2 braids. There is a tradition for women to protect themselves from evil eye. For that purpose they wear beautiful triangle amulets. People read a special prayer when they make these amulets. There are many female headdresses, which are used by Crimean Tatars. But the most popular is a fez. Very often the fez is beautifully decorated with golden and silver elements, embroidery etc. On top of the fez women put a long white scarf called "bash maram". This scarf is made of homemade (ancient times) of bought (today) gauze and has embroidered edges. Bash maram covers the back of the head and neck. Other popular headdresses are "shal" (large woolen kerchief), "chamber" (light thin kerchief), and "bash yavluk" (colorful patterned kerchief). 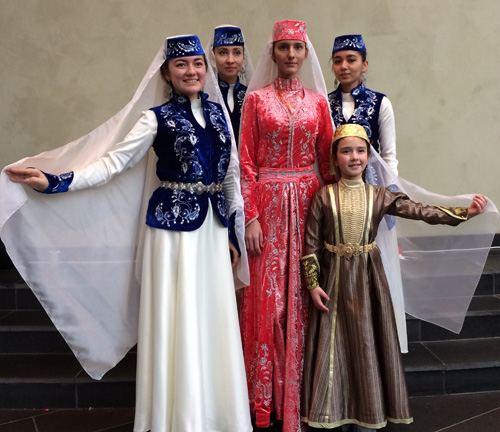 Women wore long (below the knee) wide shirts made of linen or cotton cloth called "Koten-kolmek". Also they used long dresses with wide sleeves called "ater" and wide colorful trousers (sharovary, called "shalvar") that are tied around the ankle with a strap.

The outer wear of Tatar women is a coat called "zybyn" or "kaftan". It is a tight-fitted garment, rose or crimson, with golden or silver embroidery. The sleeves of the coat are long and narrow, and there are several buttons on the cuffs. There is a special breastplate (called "kokyuslik") on the kaftan, which is richly decorated with golden coins. Women wear wide belts on top of the kaftan.

Also Crimean Tatar women use a short fur-coat called "dzhubba". It is made of red or green cloth with fur edging.

#2 Hira 2019-06-03 17:15
I would really like to buy a dress and a fez, but since i live in canada there isnt any story that sells traditional crimean clothes. Do you know where I can buy some online, a good website?
Quote
#1 Cornelius 2015-11-13 17:14
you're actually a just right webmaster. The website loading speed is incredible.
It kind of feels that you are doing any unique trick.
Moreover, The contents are masterwork. you've performed a excellent job in this subject!
Quote
Refresh comments list