The traditional costumes in Georgia were formed by the influence of nature and way of life in this country. Every man was a warrior, a farmer and a shepherd at the same time. And every woman was (and still is) a housewife, but there are very strict rules about the behavior of Georgian women. They must be modest and devout. Traditionally they couldn't show their body to strange men, only to their husbands. That's why national men costumes tend to be comfortable and warm, and women costumes in Georgia tend to be hooded and modest, but very beautiful and feminine. Nowadays these rules are not so strict, but national clothing still displays Georgian traditions and laws.

Traditional Georgian clothing was distributed until the end of 19th-the beginning of 20th centuries.

Traditional men's costumes in Georgia consist of an undershirt (it is named "piranha"), underpants "sheidishy", wide trousers "sharvali" and a kind of jacket named chokha. Chokha is the most interesting and iconic Georgian piece of clothing. It is made of wool (black, gray, white, blue, red or brown fabric), it has long sleeves and laps, and it must have a belt with a stiletto on it. Also, chokha always has bandoliers on both sides of the chest, spaces filled with bullet-like decorations, they're called Masri. The color of chokha tells about the man's place in society. 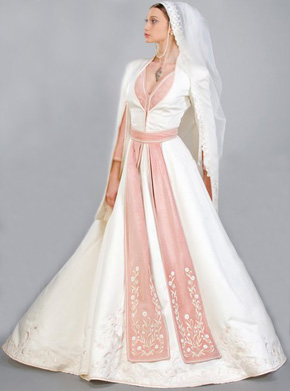 Noble's wedding robe and wedding dress made by Samoseli Pirveli

Rich people with princely origin in Georgia wore "kaba", silk jacket with silky buttons and fasteners on chest and wrists. Also, rich people wore "kuladga", short jacket, made of velvet and decorated with fur. Kuladga should be put on only with stiletto or sword and special Georgian hat "papaha".

In winter, rich Georgian people wore fur coats decorated with silver and gold. And all the rest wore coats made of felt that are called "burka". Tall karakul hat was the supplement to the costume.

Georgian hats made from natural sheepskin 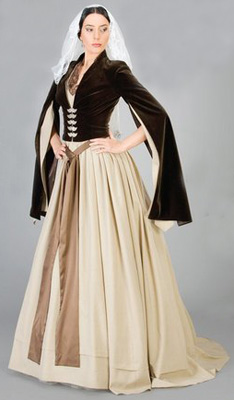 Georgian men's costume is not full without weapons. That's why even poor classes tried to have a stiletto, saber or knife. The richer man, the better is his weapons. Georgian stilettos can be really beautiful, with golden and silver decorations, carved handles. Sometimes guns were used to supplement the costume. But Georgian men often used all that weapons. For example, if some man hurt a girl, her brother/father/boy-friend had the right to punish or even kill the offender.

Traditional women's clothing in Georgia is very beautiful. It is a long dress called "kartuli", tightly belted, with ornate bodice and long laps. The belt is beautifully decorated, almost floor-length.

Georgian headdress needs special attention. It consists of "lechaki" (triangle white veil of tulle), "kopi" (thin bolster made of silk and cotton), "chikhta" (cardboard rim sewed with velvet), "baghdadi" (dark kerchief), and "chadri" (large calico veil, that covers the whole body with the exception of face or only eyes). 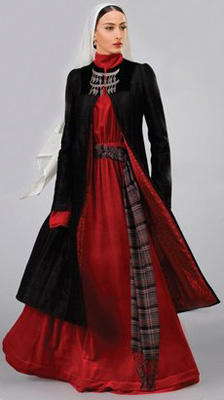 Rich Georgian women wore bright red, yellow, white, blue or green dresses. Clothing was beautifully decorated, but not too much.

Outerwear was made of bright velvet or silk with fur lining. It was called "katibi".

Ossetian dress; Traditional Georgian dress, both made by Samoseli Pirveli

But everything about Georgian clothing described above expresses only common features of traditional costume. Every region of the country has its own characteristics of clothing. 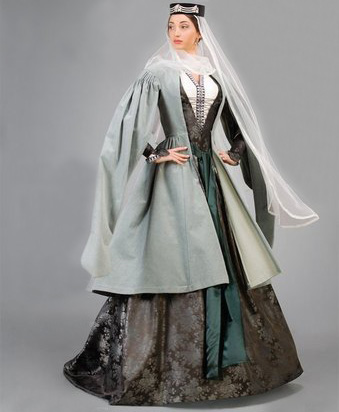 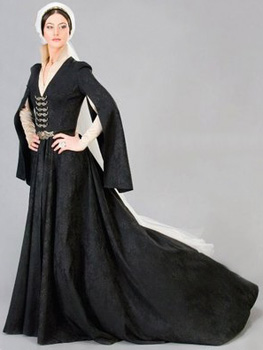 What’s the origin/influences of your traditional clothing ?