The traditional Irish mantle is a folk garment with a curious and long history of use. It has come a very complicated, sometimes even unfair, and challenging way – some of the facts about the Irish brat might surprise you. But this outerwear piece is worth researching, and it helps us learn more about the history of Ireland in general, its political past, etc. Very often, through clothes, we find out about matters totally unrelated to fashion. And the Irish mantle is one of such articles of clothing.

One of the typical outer garments used in Early Modern Ireland (the 1530s-1800) was the mantle or the “brat”. This was a rather large overgarment. And we can say that it was one of the symbols of Ireland, which, sadly, often caused oppression toward the Irish people from English colonizers. Ireland and Great Britain had a complicated history (and we highly recommend you to further research this topic if it’s interesting for you, but we won’t go into details here). In 1537, it was even forbidden by the law to wear brats (and several other garments) designed in Irish fashion. Instead, the locals were to wear English coats and cloaks.

What was the difference between the Irish mantle and the English cloak?

English cloaks were more like sleeveless capes. They were considerably shorter, circular in shape, usually had a collar (stand-up collars were popular). And also, they were more ornate on the outside.

At the same time, Irish mantles were long, about ankle-length. They were semi-circular in shape, had no sleeves and fasteners. They resembled large blankets wrapped around the shoulders.

Irish mantles are mentioned by the Burgundian chronicler Laurent Vital in 1518. Here’s what he says, “These men wear and cover themselves in big hair coats, over their heads in the same way as the women in Brabant wear their cloths”.

So, the Irish people, both men and women, wore these large warm fur mantles wrapped around their bodies and often over their heads. As for me, this is a great way to keep yourself warm and cozy in the Irish climate. 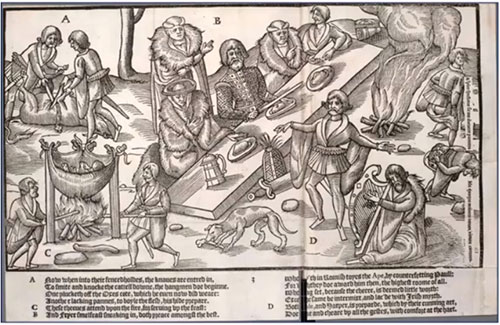 Engraving “The Image of Ireland” by John Derricke, 1581

The Irish brats were usually made from sheepskins so that the inside of the mantle was hairy and warm and the outside was smooth. A brat was sewn from several skins attached together. And a distinctive feature of an Irish mantle was a fur border around the neck and shoulders or even throughout the entire front of the brat. Sort of like a fur shawl collar. Very often, this fringe border was the main adornment of an Irish mantle, so it could be really luxurious. 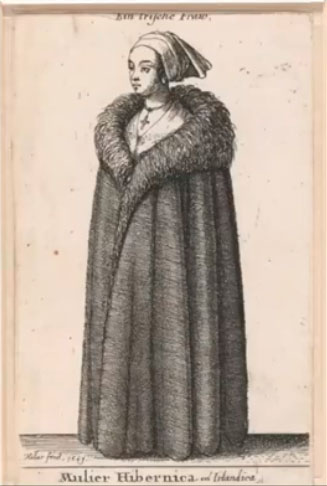 But it wasn’t always the only decoration. Irish high-end mantles could be embellished with costly trimmings imported from England and Spain. For instance, colorful silks and wools were used as trimming, as well as embroidery.

Of course, Irish mantle still remained a pretty simple garment that didn’t have a fancy cut or complicated decorations. This can be explained by the lack of industry in Ireland in the 16th century.

High-end Irish brats looked so lush and were so warm and cozy that they were popular not only in Ireland but even outside this country. For example, these outerwear pieces (thousands of them really) were exported and sold throughout northern Europe. They were seen in England, the Netherlands, and other places.

Except for expensive high-status mantles, there also were coarser brats used by peasants. They could be even made from coarse woolen cloth, not sheepskin or fine wool. This garment was widespread among all the Irish classes because it was handy, multi-functional, and looked good.

At some point, the Irish mantle even was considered a garment for rebels and criminals. It helped them survive in the woods all year round and hide from curious eyes by covering the body with a mantle. Of course, this perception was inspired by the English authorities of the time. As well as the one that implied that Irish women wore mantles to hide their unexpected pregnancies or to have something to lounge on instead of working.

The Irish brat is a wonderful outerwear item and, no matter how complicated and unfair its history, it remains an important part of Irish cultural heritage. That’s why fashion historians and costume researchers in Ireland work hard to explore the tradition of wearing an Irish mantle.