In this material, we’re going to find out what garments were used by men in Ireland in the Gaelic period (from the prehistoric era until the early 17th century), how people called those items, what Irish clothing traditions were like at the time, etc. But we’ll talk about only men’s attire. If you’re not of Irish origin, it’s highly likely that you’ve never heard these terms before, so this will be interesting. We promise!

A lot of people who’ve seen movies like Braveheart think that old Irish and Scottish clothing was the same, that they both just wore tartan kilts. But it isn’t actually accurate. Irish people had their own traditional outfit that differed a lot from a Scottish one. So, let’s see how a medieval Irish man looked like.

This is an Irish name for a linen “shirt” or “tunic”. This garment was widely used in Europe for centuries, and Ireland wasn’t exception. Medieval Irish tunic was typically yellow-colored and made from linen cloth. This garment was extremely common in Ireland.

By the way, this might sound funny and even weird for a modern person, but medieval Irish male clothing was very often yellow or pink. These were probably the most popular colors at the time. And one of the reasons is simple – these dyes were very cheap and easy to get.

Here’s Albrecht Dürer’s sketch from 1521. You can see men wearing yellow léine. One of them also is dressed in a brat, traditional Irish mantle. 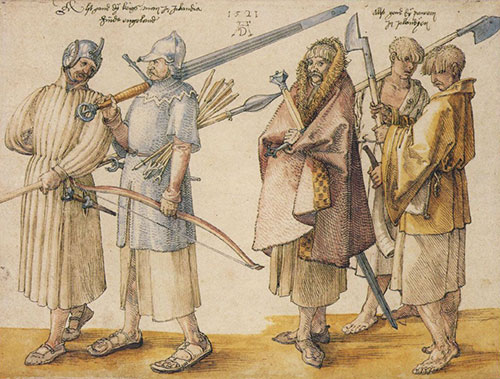 The sleeves of a léine often were hanging sleeves. They had openings midway to the edge, so the hands were pushed through these holes and the rest of the sleeve hang down. Sometimes, the sleeved hang almost to the ground, but usually, they reached about knee-length. You’ll see this in the pics below.

Also, you should note that a léine was worn without any trousers. Just a knee-length tunic and outerwear, the legs were left bare.

It’s a cloak or mantle worn over the léine. Or it can be worn over an ionar (folk short jacket) with a léine underneath it. The brat could cover the head as well as the body or could be just thrown over the shoulders.

Here’s an etching of an unknown artist from around 1540-1547. It depicts Irish chieftains in traditional clothes. And we can see men dressed in léine, ionars (for instance, a bright red one), and brats on top.

The color of a brat was usually bright and cheerful – pink, green, blue, red. Rarely, it was black or dark-colored. Sometimes, there could be a tartan pattern on a brat.

This is a short (it typically reached the waist) jacket very common for Irish men, especially in the medieval period. It often had open sleeves that hang down over the arms. And usually, this jacket had a lot of decorative trims.

Why did ionar have open sleeves, cut open on the inside? Because it was always worn on top of the léine, and a léine had wide hanging sleeves, so there had to be space for all that hanging fabric.

These are trousers. They were usually rather tight-fitting. These pants could have a checkered tartan pattern on them.

Also, the cut of triús was interesting. Originally, two pantlegs were attached by seams to the upper part that resembled shorts. Often, this upper part was loose and the pantlegs were fitted.

It’s Irish outerwear. Basically, it’s a greatcoat. The cóta mór was worn in winter over the léine. And this outer garment typically had a row of buttons on the sleeves so that the sleeve could be unbuttoned and the wide léine sleeve could hang down and be visible.

Here’s male attire found in Killery Bog, Sligo, Ireland. It’s dated the 16th century. And you see a cóta mór with buttons on the sleeves, a brat, and triús.

These are leather shoes originate from the late 16th century. A lot of folk costume lovers are already familiar with Scottish word “brogues”. The Irish bróg shoes looked practically the same as Scottish. They were made from leather and the upper part of a shoe was constructed so that water would drain out during the walk (because there are many swamps in Ireland and people often needed to walk on the wet ground). So, there were a number of holes in leather to allow the water go out.

Shoes were worn over a kind of specific woolen stockings without soles called “mairtini”. They covered only the upper part of the foot and the leg upward. There was a hole for the great toe, thanks to which the stockings were kept in place. Very unusual item of clothing indeed.

This is an Irish traditional accessory – a belt. And it survived without change to our day – almost the only item that did that. The crios is a long woven belt. And it is a very important accessory because it made the léine look the way it traditionally meant to. The unbelted léine reaches to the ankles of a person, and then, it is belted at the waist (the crios is wound around the waist a few times), and the fabric is pulled up so that the hem was about the knee-length. Women wore a léine ankle-length, while men pulled it up to the knee-length.

Fun fact! To wear the crios properly, you need to breathe out, wound the belt, tuck the ends under the belt, and breathe in again. It forces the woven fibers close together, and the belt stays in place without any buckles, knots, etc.

If you want more info and more visuals of Irish traditional garments, both authentic and modern versions, here’s a great video:

Hi, I wear traditional Irish clothing daily (Léine, brat, ionar etc). If you want some photos for your site, let me know.

Hi! I'm dying to have some!! Could you please contact me via ladomyra.gor