The national clothing in Finland is very bright, colorful and interesting. Usually traditional Finnish costumes are rather warm because the weather in the Northern Europe is severe and cold. A lot of accessories in Finnish clothing are made of leather and metals, bright embroidery and beautiful silk fabrics are used for decoration. Several centuries ago rich people in Finland used to wear impossibly beautiful costumes, but even poor Finns tried to look bright and colorful to adorn severe nature around them.

Traditional national clothing in Finland dates back to the 16th and 17th centuries. Finnish national costumes are very different because every region has its own historical, climate and traditional peculiarities. So, in every region, there is native clothing which was formed by the living in a specific area.

Finnish clothing has European features and specific influence of nature, climate and history of Finland. Traditional Finnish women clothing consists a smock, skirt, cotton blouse, vest or bodice, jacket, apron, scarf, headdress (cap, headband, hat etc.) and shoes. Traditional Finnish men clothing consists a shirt, trousers (long or knee-length knickerbockers), waistcoat, jacket or coat, headdress, scarf and laced or buckled shoes. There are also a lot of different accessories like jewelry, belts, kerchiefs and so on. Finns usually used stripped cloth for shirts, skirts, and waistcoats. Often colorful embroidery was used for decoration. But it depended really much on the financial status of a person.

During centuries, national costumes in Finland transformed pretty much. It was caused by progress in sewing techniques, the impact of artists, fashion and the industrial production of clothes. The biggest changes happened in the middle of 20th century. Today Finnish national clothing looks very different from its prototypes. But people of Finland are doing their best to return the historical look of traditional costumes. They've found the "Suomen Kansallispukuneuvosto" (National Costume Council of Finland), that is responsible for researching, recording, documenting, educating, giving advice on, maintaining and developing the tradition of Finnish national clothing. 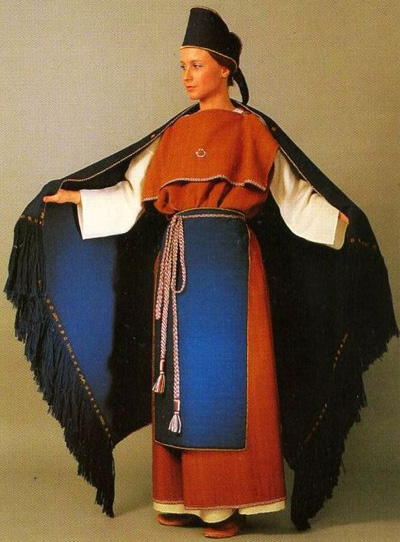