Slovakia is a small country with rich and perfectly preserved traditions, especially clothing traditions and folklore. There are lots of folk bands that perform dancing, singing, playing on folk music instruments, etc. And their stage costumes are rather close in design to authentic garments. So it is not a problem to find out how a Slovak traditional attire looks like. This article is dedicated to the costumes of only one region of the country – to Zemplin ethnographic area. Even inside this one single region, there are dozens of variations of traditional outfits. The more fun we’ll get!

Zemplin is an ethnographic region of Eastern Slovakia. It has a unique folk costume. Every region of Slovakia has slightly different traditional clothing. Of course, there are some common features that characterize the whole country, but if you look close enough, you’ll see the difference between folk garments from various areas. 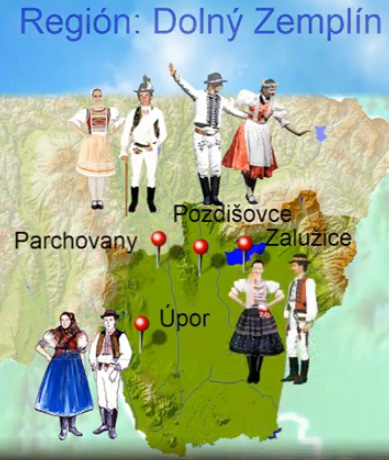 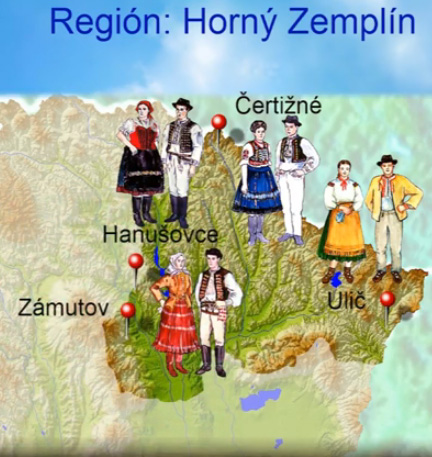 The maps used in this article are from video “Slovak folk costumes / Slowakische Volkstrachten / Kroje Slovenska” on YouTube channel TheMiro59.

These outfits are from Zemplin area in Slovakia. They are modern folk garments. The people here are folk performers. 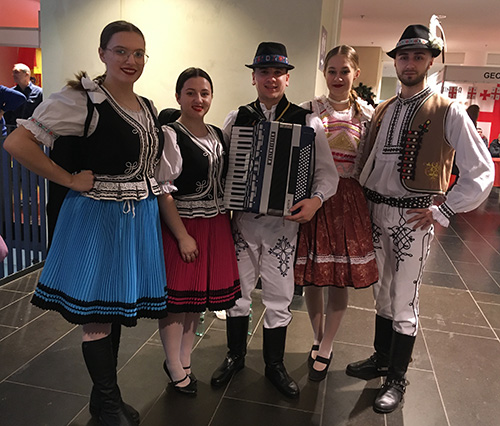 As you can see, the male costume consists of an embroidered shirt, trousers, an embellished vest, a belt, a felt hat, and high boots.

But actually, there are a few variations of Zemplin men’s outfits. For instance, the vest can be replaced by a white jacket that matches the trousers in decoration. Or both garments can be worn at once. 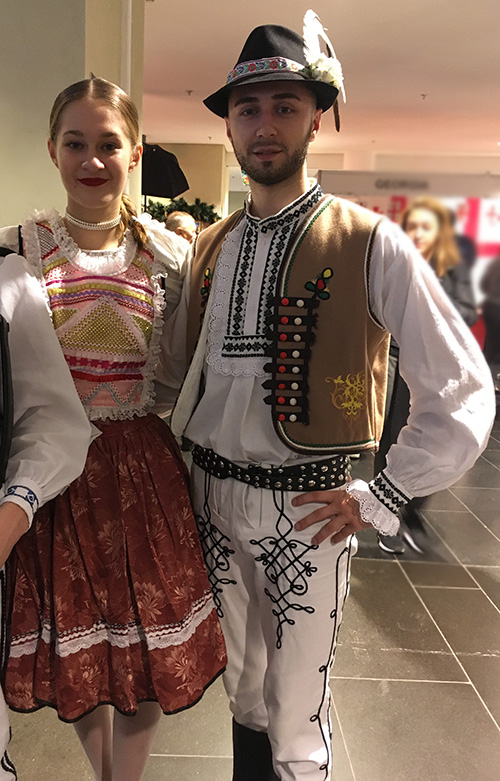 The trousers are adorned with peculiar embroidery patterns or cording, typical for several Slavic countries. The black embroidery looks festive and graceful on white fabric of the pants. 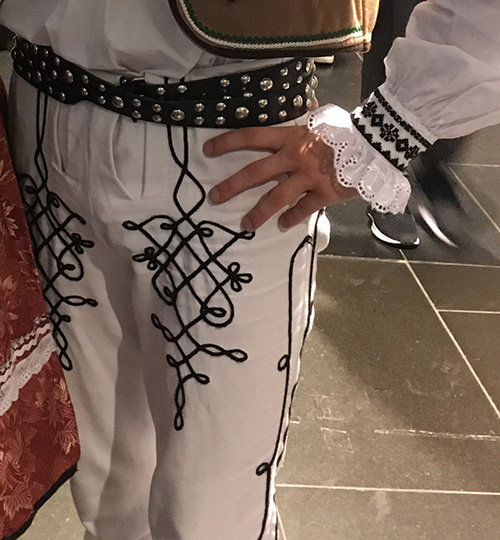 The shirts of these guys also have dark embroidery (black or navy blue threads) on white background. The designs of embroidered shirts are slightly different. In Zemplin region, in general, the men’s shirts can be embellished with black, blue, red, green, or multicolored embroidery.

The vests are most often black, but can also be red or brown. They are usually richly adorned with decorations – embroidery, applique, braiding, etc. The jackets typically are either white with black embroidery or sometimes colored. 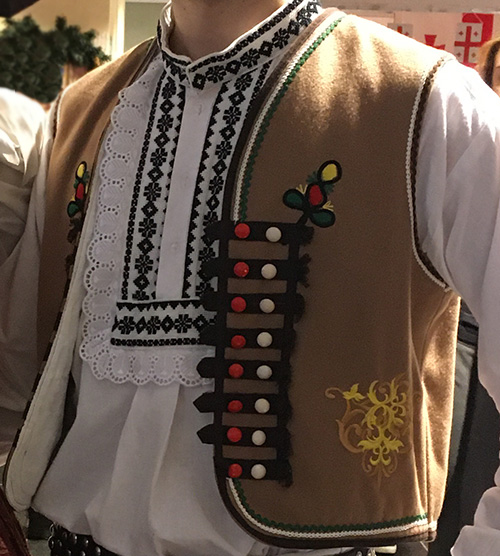 Another interesting male accessory is the hat. Usually, the hat is felt, with narrow brims, and some decorations. It often has a colorful ribbon, rooster feathers and/or flowers as an adornment. 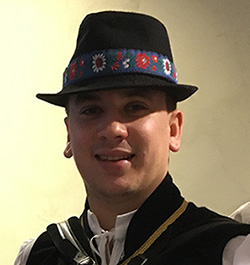 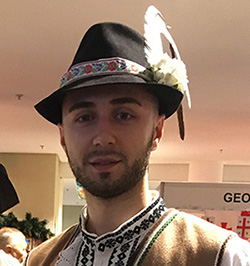 The boots and belts are made from leather and can be either plain and simple or ornate.

The situation with female folk dress in any region of Slovakia, including Zemplin area, is much more complicated because there are dozens of variations. Women always want to differentiate, to look unique, so they invented a lot of color combinations, designs, styles, and cuts of traditional outfits.

In these pictures, you see two different styles of dress. They have a lot in common but aren’t identical. 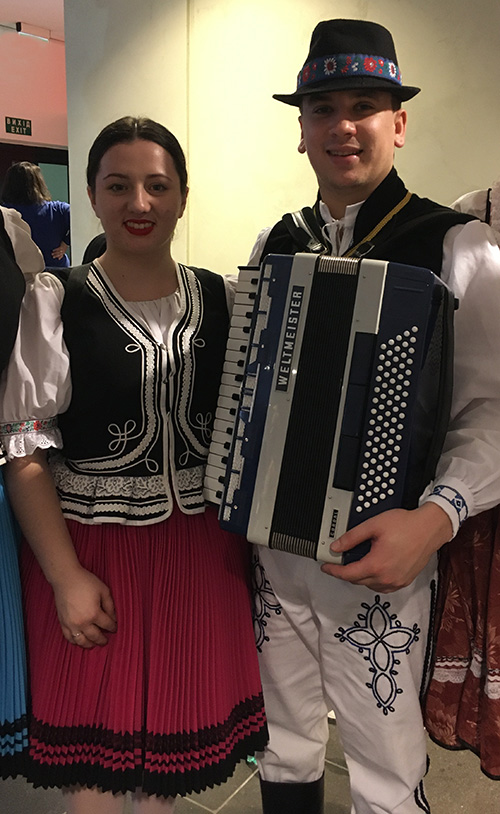 In general, the women’s traditional attire from Zemplin region of Slovakia includes a wide skirt, an embroidered blouse, a vest or bodice, footwear (shoes or boots), and a headdress of some kind.

The skirt is usually knee-length or sometimes longer. It is always wide, can be pleated, and usually has several petticoats (up to 5 or even more). The color palette is very wide – from black to pink to white to yellow, and so on. 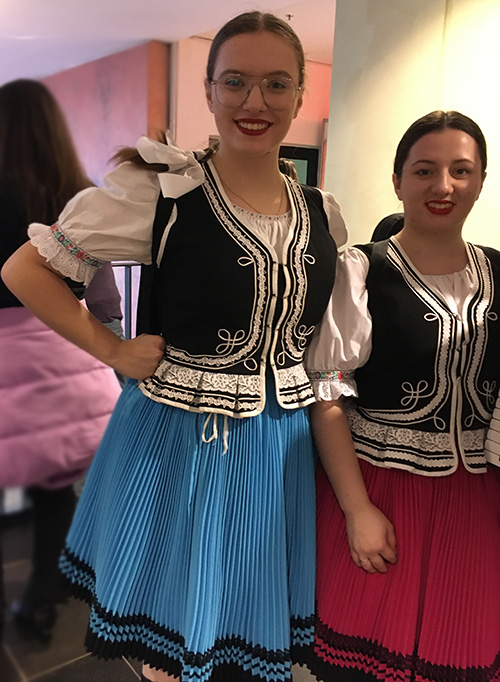 The skirt is often complemented with an apron but not always. The aprons vary – they can be pleated or not, multicolored or monochrome, embroidered, adorned with lace and applique, etc.

The blouse typically has short puff sleeves (but they also can be long sometimes), a round neckline, and some adornments. It is short and worn tucked into the skirt. The sleeves are embellished with embroidery or a colorful ribbon (similar to the one we see on male hats). The neckline can be decorated with frills or other embellishments.

The bodice is a very beautiful and diverse garment. In the photos, you can see two different kinds of bodice. The black one is stricter, fastened at the front, it is waist-length and richly decorated with embroidery. The pink one looks delicate and feminine. It has a lot of frills and a rather interesting texture. Also, it is fastened at the side. 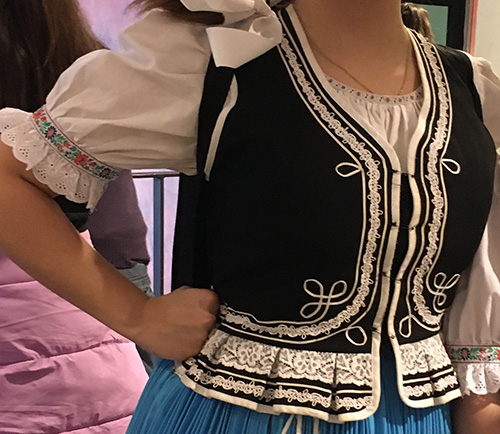 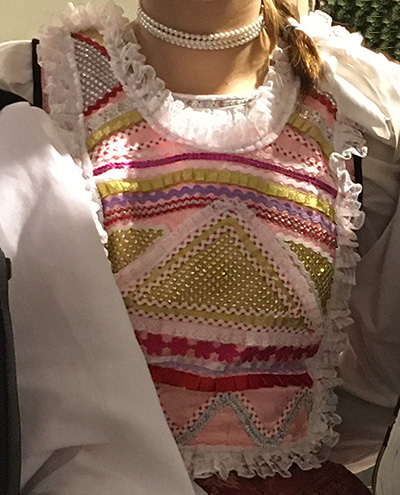 Unfortunately, these girls don’t wear any headdresses but there is a large variety of them in Slovakia. Though, unmarried girls often use ribbons as the only headwear, while married women prefer kerchiefs.

Women wear jewelry but not too much. Traditionally, a necklace or choker is the most popular choice. Other adornments are ribbons, lace, flowers, wreaths, kerchiefs or scarves, etc.

#1 Czechoslovak Folklorist 2021-10-22 13:00
Again, as with the pages about Czech folk costumes, this page is inaccurate. My biggest problems are:
1. Saying married women prefer kerchiefs on their heads - it is not a question of preference and in the past, you would be heavily ostracised (if not worse)
2. The whole use of the word "authentic" - what does it even mean??? Any researcher (no matter if with or without a university background) and any anthropologist would find it highly problematic.
Quote
Refresh comments list