Southern Albania is the area with unique traditional outfits. There are some peculiarities common for all these regions, but other features are typical only for a certain area. And in this article, we will try to find out more about Southern Albanian clothing traditions and folk costumes and search for differences and similarities between the local garments. For instance, did you know that in Gjirokastër region of Albania people traditionally would rather spend money on gold embroidery than save or deposit them?

In the region of Vlorë, the traditional costume for men is similar to a Greek one. They wear a white skirt-like garment called “fustanella”, a white shirt with wide sleeves, and a short black jacket or vest. Also, men use the Qeleshe cap – traditional white brimless felt cap, rather widespread in Albania. Women in this area use multi-layered clothing. They wear long shirts with long sleeves, long skirts, various vests, jackets, and other outer garments, ornate belts, and different headdresses.

In Korçë, men wear the same outfit as in Vlorë and add to it a belt which is red&black (like the Albanian flag). Another variant of folk costume for this area includes black pants or a long skirt (for women) with long white socks. The national attire of Korçë region is very colorful. Females prefer red, burgundy, and black colors. The floral patterns on black background are popular.

In Mokër region, people use traditional shoes called “opinga”. They are leather shoes fitted to the foot with leather or wool strips. In Southern Albania, the opinga are turned up and adorned with black wool pompoms on toes. Similar footwear is used in Montenegro, Kosovo, Greece, North Macedonia, and Italy.

Women in folk outfits from Gjirokastër region of Albania

In Berat region, the characteristic feature of local folk costumes is the same as in Gjirokastër – large amounts of gold embroidery on garments, especially female ones. It is typical for this area to use black outer garments (vests, jackets, coats, dresses, etc.) with gold embroidery patterns. But you can see such embroidery on white shirts and skirts, too.

Fier region of Albania is characterized with red embroidery on white background. And the amount of this embroidery is rather large. The elements of the costume are the same as for other areas of Southern Albania. 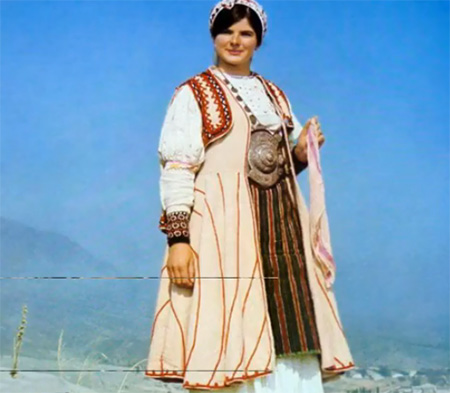 #1 Ari 2019-09-18 13:11
The fustanella is an Albanian traditional piece not Greek or whatever, "Fustan" is an original and ancient Albanian word, Greek clothing is largely influenced by Albanian clothing and the other people who live there.
Quote
Refresh comments list