Kazakh traditional embroidery patterns. What inspired them to create such ornaments?

Kazakh folk dress is usually embellished with cute traditional needlework demonstrating intricate networks of patterns and symbols. The local embroidery designs are unique and can be seen practically only in Central Asia. Where did Kazakh artisans take the inspiration to create such ornaments? Also, let’s see how to distinguish Kazakh needlework from any other embroidery around the world. What specific features does Kazakh ornamentation have?

One of the main characteristics of national attire in Kazakhstan is the ornamentation of these costumes. The folk patterns, symbols, and motifs play a significant role in the local folk culture. Kazakh people are originally nomads and they have always been close to nature and depended on nature a lot. So, the local craftswomen took inspiration in everything around them when creating embroidery patterns – the sun, the moon, the heaven, the earth, the flora and fauna, etc. 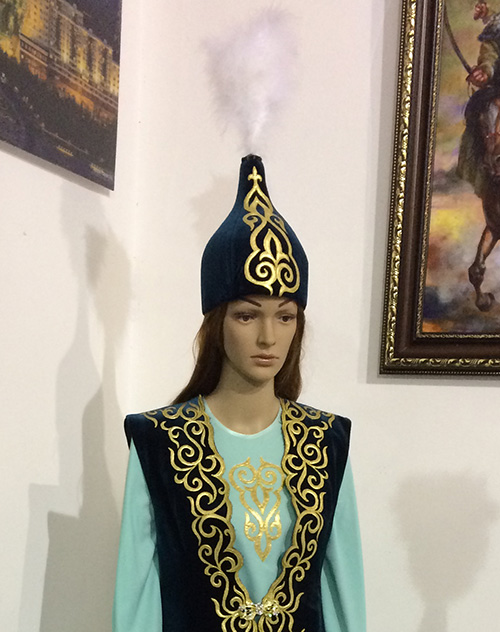 You can see a lot of floral designs, geometric patterns (circles, triangles, rectangles, etc), and zoomorphic ornaments. A lot of Kazakh needlework patterns are cosmogonic and astral. But no matter what symbols and figures form a pattern, they’re stylized in a very specific way, typical for Central Asia.

The ornamentation is shaped into intricate interweaving of symbols, which might seem indeterminable for the foreigners, but the locals easily make out familiar shapes in the intricacies of a particular design. For example, ram horns are often used in Kazakh ornamentation but they’re hidden from an inexperienced eye. Here is an example of a ram symbol interwoven into an ornament. 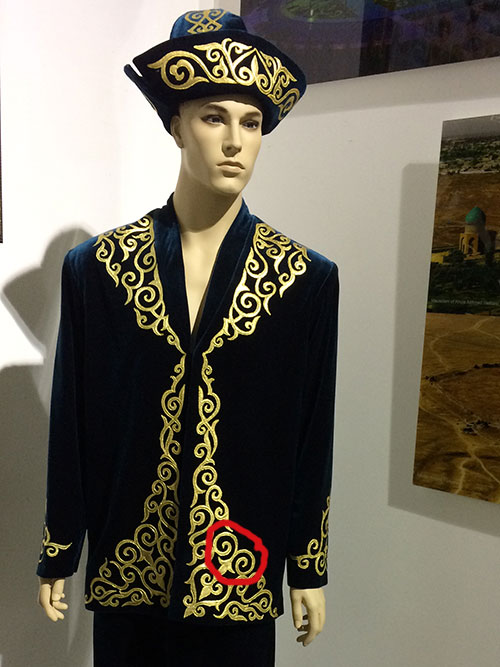 In Kazakh culture, a ram traditionally was a symbol of the upper world, and ram horns – a symbol of fertility.

Another popular shape in Kazakh needlework are solar symbols. They indicate the circle of life, the life-giving power of the sun, and similar spiritual matters. We can see a lot of circles on vintage clothing, especially on robes and veils. You can find a few photos in this article: Authentic embroidery patterns in Kazakhstan.

In general, Kazakh traditional needlework designs consist of the variation of curls, spirals, and shapes that imitate leaves, flowers, stars, etc. These shapes are rather recognizable. Of course, you’ll see similar symbols and embroidery techniques in neighboring Kyrgyzstan, Tajikistan, Turkmenistan, and Uzbekistan (as their cultures are close and have a lot in common), but each country also has its own peculiarities in embroidery and clothing traditions. 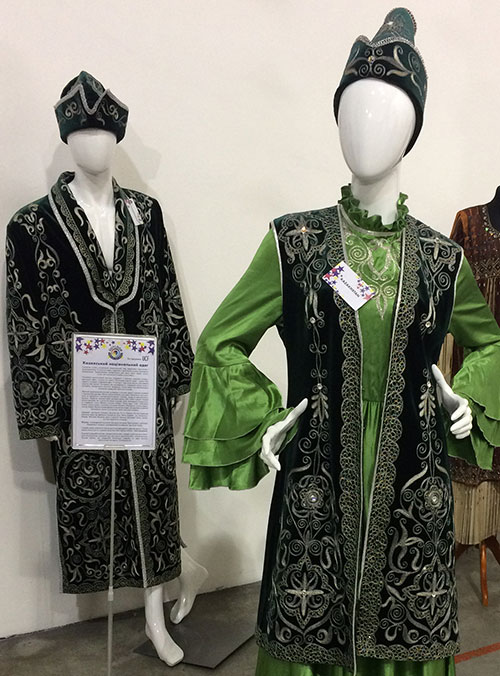 Kazakh traditional embroidery is often placed on the neckline, cuffs, borders of a garment, and hem – where the garment ends and the wearer’s body is open. There is a reason for it. The ornamentation is meant to protect the wearer from evil in those places most vulnerable, where the outer world touches the body. Such patterns should protect the person from the evil spirits creeping under the clothes.