History of Korean hanbok. Evolution of hanbok during the last 2,000 years

It is said that the national costume of Korea – the hanbok – appeared during the famous Three Kingdoms period. But, of course, every dynasty had their own fashion trends, tastes, and clothing traditions. So the hanbok was changing profoundly during the last 2,000 years. Let’s find out what changes did it undergo and what fashion tendencies were there during the Baekje, Goguryeo, and Silla Kingdoms of Korea.

The word “hanbok” itself actually means “Korean clothing”. It consists of 2 main pieces. On the upper body, both men and women wear an upper garment called “jeogori”. Women's jeogori is fastened by a string called “goreum”. For the bottom, women wear a long skirt called “chima” and men wear baggy pants called “baji”. The outfit is complemented by silk shoes called “kkotsin”. 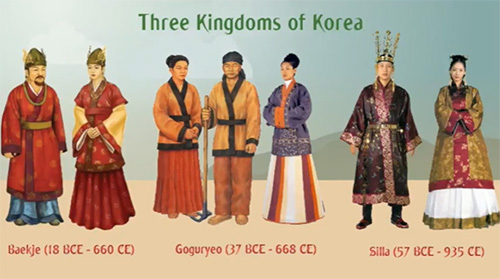 The people of Baekje wore wider pants compared to the pants worn in Goguryeo. Also, the jeogori was longer and wider.

The mural paintings dating back to the Goguryeo Kingdom show that there was no distinct difference in men’s and women’s hanbok. Both women and men wore white-sleeved jeogori, long enough to cover their hips over trousers or skirt.

During the Silla Kingdom, hanbok was influenced by Chinese fashion. The people wore long jackets fastened at the waist, over long skirts. 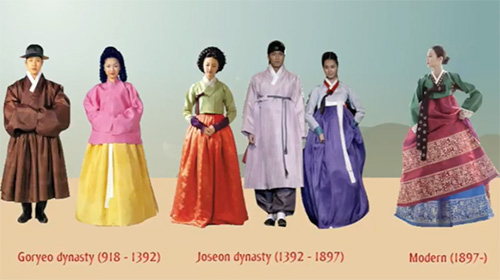 In the Gogyeo Dynasty (918-1392), Mongolian fashion influenced the hanbok by shortening the chima, and the jeogori was shorter about the waist and tied with a long ribbon, and the sleeves were curved slightly.

The Joseon Kingdom (1392-1897) was a turning point in the gradual transformation of hanbok. The women's jeogori was worn much shorter and tighter than previous periods. In the middle of the Joseon era, the jeogori was being worn higher above the waist. And by the late 19th century, it came up to the chest and was worn with an additional white sash banded around the chest.

However, in the mid-20th century, this trend was reversed and the jeogori once again was in a longer length that typically hits a little above the waist.

Later on, hanbok was replaced by Western clothing, but it’s still worn in South Korea to this day. Although, it's not worn for everyday life – it's worn for ceremonies and other special events.