Nepal is a multicultural and multiethnic country because it was formed in the 18th century from several small kingdoms: Mustang, Madhesh, Videha (Mithila), and Limbuwan. Each of the ethnic groups – and there are more than a 100 of them in Nepal – has its own clothing traditions, folk costume and accessories, traditional jewelry pieces, and etc. The more interesting it is to learn about the traditional clothing of Nepal. Though, in this article, we’ll only tell you about the main garments included to the national costume of Nepal.

The men’s folk clothes are called “Daura Suruwal” or “Labeda Suruwal”. The main elements are daura (double-breasted shirt) and suruwal (trousers); other pieces are a vest or jacket (the latter was added by the Prime minister of Nepal Jang Bahadur Rana), and a headdress. The combination of a daura suruwal with a jacket is the informal traditional outfit. It appeared after the Queen of England gave the jacket as a present to the Prime minister of the country. After him, many men started to add a waistcoat or other European-style coat to their set of traditional clothing.

The traditional daura doesn’t have buttons or clasps. It is held in place with a help of 4 ties (two near the shoulders and two close to the waist). The suruwal are loose pants – baggy trousers – that fit tightly at the ankles. Daura suruwal is loose and made from natural fabric, so it should be comfy but it isn’t that simple. The ties on the shirt and pants, that have kept the original garments in place, aren’t easy to cope with. If you have the experience of wearing such a clothing, it is ok for you but newbies often have some trouble donning it. That’s why modern European garments became popular and widespread in Nepal these days. 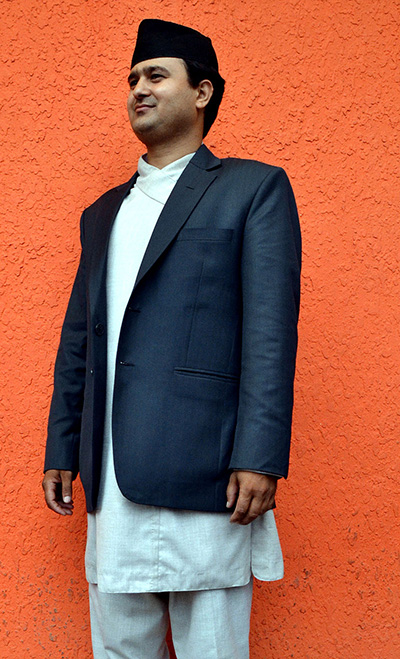 Man wearing a daura suruwal with a classic suit. Photo from Wikipedia.org. The photographer is Mahalaxmi Silwal

The national headdress of Nepali men is called “Dhaka topi” or “Nepali topi”. It is a kind of a skull-cap but its shape is unusual. The hat is made from a fabric and pattern called “Dhaka”. The patterns are similar but not the same – there are dozens of various patterns used for this cap. Dhaka topi got its popularity in the middle of the 20th century. There is even the International Day of Nepali Topi (January, 1) – this headdress is one of the main symbols of the country and the item used to unite the cultures of different ethnic groups in Nepal.
Daura suruwal is being used by Nepali males for centuries. Nowadays, this folk costume isn’t often worn by Nepali men, though they still use it for weddings, ceremonies, folk festivals, and similar special occasions.

Nepali men also have several more garments traditionally used in a day-to-day life and for special occasions. These are a “dhoti”, a “lungi”, and a “tapālan”. The dhoti is a large rectangular piece of cloth (4.5 meters long) worn wrapped around the hips of a man and knotted at the waist. It resembles a long plain skirt, which is rather comfy for the hot and humid climate of certain regions in Nepal. The lungi is a garment similar to dhoti but the ends of this cloth are sewn together. It is a large tube of fabric worn as a skirt and tied at the waist. The lungi is usually solid-colored or has a plaid pattern. Tapālan is a long shirt worn with tight-fitting pants, a waistcoat, and a topi. While the dhoti and lungi are used on a daily basis, the tapālan is a festive outfit worn for weddings, celebrations, and similar occasions.

The women’s traditional costume of Nepal is called “Kurta Suruwal”. It consists of light baggy pants, a blouse, and a large scarf. This outfit is often used by Nepali females in modern days. The trousers are loose, usually cotton, and have a bright coloring (any color can be used). Usually, they are solid-colored, without any patterns, though modern suruwal might have prints and patterns as an embellishment. Unlike the pants, the blouse is very bright with patterns. There are hundreds of various color combinations and prints. The mentioned blouse is long (mid-thigh length or even knee-length) and sleeveless/short sleeved. The scarf is large; it is worn draped over the body. The pattern on the scarf matches the one on the blouse. 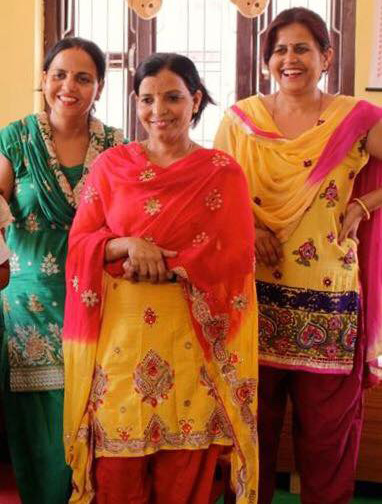 Another traditional attire of Nepali women is a sari. It is a must-have for any future bride – sari is usually used as a wedding dress in this country. Also, sarees are worn for any important special occasions and ceremonies. Nepali traditional sari and Indian one are the same; it consists of a petticoat called “parkar”, a tight, cropped blouse, and the sari cloth itself (piece of fabric 4.5-8 meters long and 2-4 feet wide). This cloth is draped around the waist and across one shoulder. Sari is usually worn with lots of jewelry, gold jewels in particular. 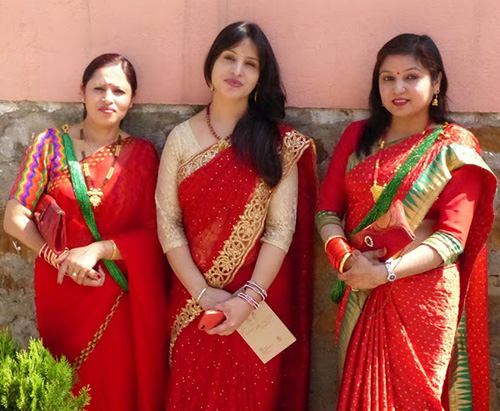 Baby-boy’s attire. Nice costume with colorful patterns. It even includes a topi. Photo from Icoloridelnepal.blogspot.com

The traditional dress for Nepali girls is called “bhāntānlan”. It is an ankle-length tight-fitting dress with long sleeves. The dress has slits at the sides to allow walking comfortably. The pattern of the fabric is usually bright and multicolored; the fabric itself is brocade, silk, or cotton. Of course, this outfit is worn as a festive garment. Another costume for a girl consists of baggy pants and a knee-length dress. 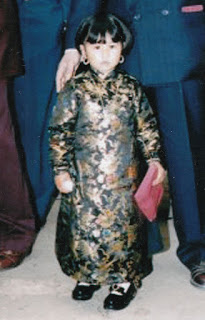 Nepali kids often wear piercing and plenty of adornments – jewelry pieces like bracelets, necklaces, earrings, etc. are used. These pieces are believed to defend children from evil. When they grow up, men and women often get rid of that much piercing.

We’ve shown you the most widespread national pieces of clothing in Nepal. Of course, there are many other local traditional garments used by certain ethnic groups. But it’s a topic for another article.

#2 samten 2019-04-13 10:03
specify the traditional dress of nepali for both men and women
Quote
#1 Anita Tamang 2018-03-03 03:55
Nepal is home to different kinds of religious, ethnic groups and even climates. This has led to significant variations in Nepalese Clothing, both historically and in modern times. While the dress of Nepal has also been influenced by nearby countries, including India, Pakistan, Bangladesh and Sri Lanka, Nepalese clothing retains an independent identity with garments specific to the cultures of Nepal. Daura suruwal is our national clothing of Nepal. Beside Daura Suruwal now we have many ethnic clothing in Nepal. Tamang Clothing, Gurung Clothing, Magar Clothing , Newar Clothing, Kirat Clothing & Rai Clothing.
http://www.clothinginnepal.com/nepal-traditional-clothing
Quote
Refresh comments list