There is no traditional costume typical for all the parts of China. Each region has its own features, and sometimes clothing differs completely throughout the country. Another reason for the variety of Chinese outfits is that every Imperial dynasty in China created or refined the traditional clothing to their taste. Though there is one style of clothing which today is considered in the world to be Chinese national costume. It is "hanfu" for men and "qipao" for women.

The cut of Chinese clothing is rather plain and elegant. No quilling, ruffles or tacky elements. But there are many delicate and exquisite decorations that embellish the attire. Mostly traditional clothing of China is made from silk. It is decorated with embroidery, patterns on fabric, ornamentations and sophisticated fasteners. 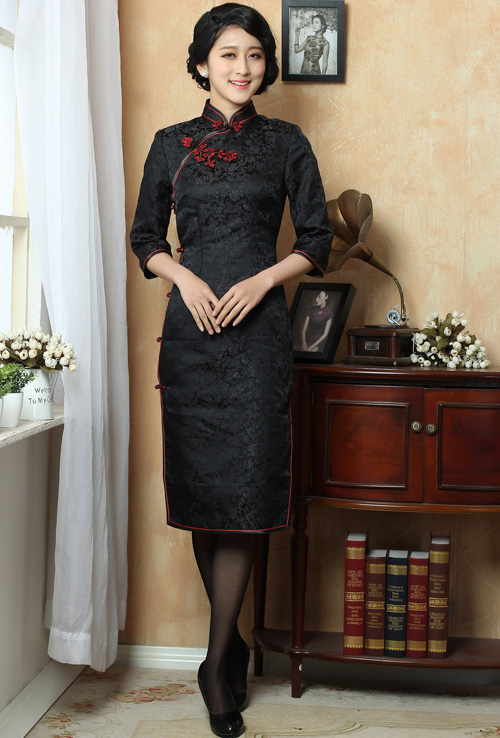 The design of traditional Chinese clothing is very old – it changed very little during centuries. Though in ancient times every royal dynasty implemented some new features to the national outfit. Today we distinguish several dynasties that have influenced the most on the national costumes of China: Han Dynasty, Tang Dynasty and Qing Dynasty. Many people around the world consider "hanfu" (men's garment from the Han Dynasty period) to be Chinese male traditional costume and "qipao" (women's garment from Qing Dynasty period) to be the female traditional attire of China. These types of clothing are the most famous Chinese outfits around the world.

Chinese traditional costume has a plain but elegant design. Women's dress fits the body perfectly, but manages to look modest at the same time. Men's outfit is more loose, usually it is a robe-like garment. Male costume looks rather sophisticated and noble, while female is very feminine.

The colors of traditional Chinese garments are usually dark or bright red. Dark-colored clothing was used for ceremonial purposes in all times. While red-colored clothing was (and still is today) worn for wedding ceremonies. Light-colored attires were used by ordinary people in day-to-day life. The color of Chinese traditional costumes may as well indicate a certain season: black is for winter, green is for spring, red is for summer and white is for autumn.

Chinese national costumes are mostly embellished with handiwork rather than with jewelry. Such adornments as embroidery, ornamentations, patterns on fabric and similar are mostly used. There are very few metal, jewelry or other precious decorative elements.

The most popular and well-know Chinese men's attire is called "hanfu" or "hanzhuang". It is a costume typical for Han Dynasty.

To make it as simple as it can be, a hanfu consists of a top (a shirt), a bottom (trousers or men's skirt), and a robe on top. Mostly informal costumes have 2 or 3 layers: an undergarment, the main garment and an overcoat. Formal and ceremonial Chinese traditional clothing can have much more pieces to make a full set.

There are several different formal outfits in Chinese society. These are costumes for religious purposes, court dresses, ceremonial attires and etc. For example, so-called "xuanduan" is a formal outfit for a Confucian ceremony. It consists of a black or dark blue knee-length top garment with long sleeves, a red skirt "chang", a long red front cloth panel attached to the waist belt called "bixi", an optional white belt, and a long black hat called "guan". 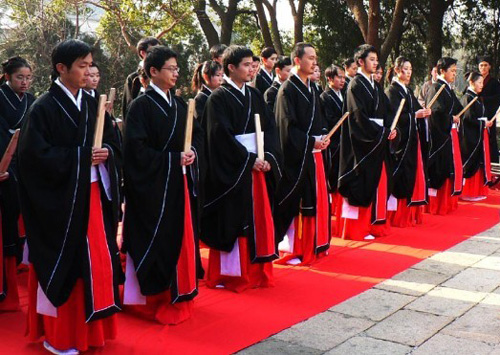 Male national costume in China is always complemented with a headdress. There are many kinds of men's headgears. Each kind tells about the social status, profession and rank of the owner. The most widespread types of hats are: "mao" (a stiff hat), "jin" (a soft cap), and "guan" (a formal hat). But there are dozens of other types.

One of the most popular female traditional costumes in China is called "qipao" or "cheongsam". It is a tight-fitting dress with straight collar and slits on both sides of the dress. The materials used for this garment are silk, linen or cotton. There are many designs of qipao. It can be short, knee-length or long; qipao also can be sleeveless, with short or long sleeves. But it is always narrow, slender and created to show the natural curves of the female body.

Though historically qipao wasn't as tight-fitting, as it is today. It's funny, but when qipao was invented it was wide and loose. The original qipao covered almost the whole women's body, leaving exposed only the head, hands, and the tips of toes. The outfit was rather baggy and hid the figure of the wearer. Only later qipao acquired the shape typical for modern Chinese national garment.

But qipao is not the only one traditional costume worn in China. There are several other outfits. For example, the "pienfu" is an ancient ceremonial attire which consists of a knee-length tunic-like top and an ankle-length skirt or trousers. Chinese women wear hanfu as well. 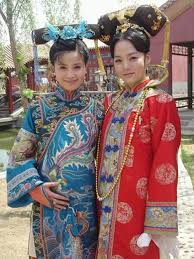 Another variant of traditional Chinese costume is Manchu clothing. It is the national garment of the Manchu ethnic nationality. This kind of clothing was popular during the period of the Qing Dynasty, so many people in China still use it. Manchu clothing consists of a long gown, sometimes complimented by a jacket or a waistcoat. The collar of the gown is round or straight; there are 2 or 4 slits at the bottom; the sleeves are tight with cuffs shaped like horse hoofs; the sash is worn at the waist.