The clothing traditions in India were formed by the influence of local climate, beliefs, cultural traditions and different regional peculiarities. People of India wear ornated attires made from natural fabrics. They use a lot of jewelry and embellishment. Very often Indian garments consist of a simple large piece of cloth that can be draped in various ways. The national Indian female clothing is rather modest and feminine at the same time. That's why it is popular not only in India but in many other countries of the world.

Mostly Indian men wear clothes made from light and natural materials. Very often it is just a piece of cloth wrapped around body. The most popular clothing for men in India are Dhoti or Pajama, Sherwani, Lungi and Kurta.

Dhoti. This piece is popular in villages. It is a piece of cotton fabric of 4-6 feet long. Men are wrapped in Dhoti like in a skirt, they also often belt it. Dhoti is much more comfortable in Indian climate than trousers. It is worn with a shirt. 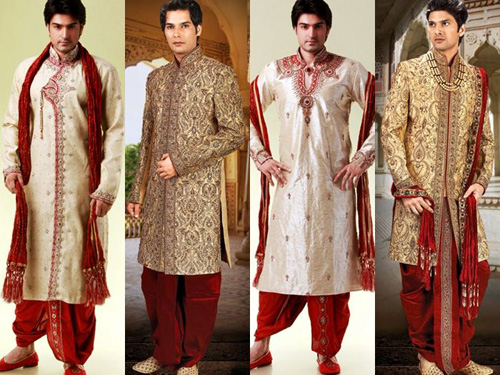 In South India Dhoti or similar clothes is called "mundu" or "dhotar", in North and Cenrtal India – "mundu", "pancha/panche", "veshti" or "lungi".

Mundu is always white. This piece of clothing is long, up to the ankles. But men often wear it tucked up to knee-length. Tucked mundu is more comfortable for working in a field or at a workshop.

Lungi also is a piece of cloth (cotton or silk). It can be wrapped around the body or stitched and worn like a skirt. Both variants of usage are popular among Indian men. Some women in India wear lungi as well.

Sherwani. It is a long jacket or coat with exposed buttons through the whole length. Sherwani is just below the knee long. It has a stand-up collar. This piece of clothing is worn with tight-fitting trousers called "churidars". Sherwani is clothing for official events like weddings. Its color is usually light ivory, cream or golden. It is often ornated – embroidered with silver and gold. To complete the costume a scarf called "dupatta" is worn.

Indian male headdresses. There are many various types of headgear: "pagri" (a turban), "taqiyah" (a short, rounded skullcap) "gandhi cap" (a white colored sidecap, pointed in front and back, with a wide band), "dastar" (a Sikh turban worn by respected people), "pheta" (the Marathi name for turbans, a headdress for ceremonies and occasions), and "mysore peta" (a headdress worn by the kings of Mysore for formal meetings and occasions).

Women's clothing in India is very feminine, delicate and beautiful. Usually women wear sari or ghagra choli. Such attire is suitable for the climate of India. That's why it is worn by people in this part of the world for centuries and never is out of fashion.

Sari (saree). This garment is the most popular among Indian women. Actually, females all around the world use it because of its beauty, tenderness and convenience. Sari is a piece of cloth of 4-9 meters long that is draped over the body in various styles. There are plenty of traditional styles of sari like Gujarati, Madrasi, Maharashtrian, Banarasi, Dhakai, Kantha and etc. The most widespread variant of draping sari is to wrap around the waist with one end then drape over the shoulder. Sari is worn with a blouse and over a petticoat. 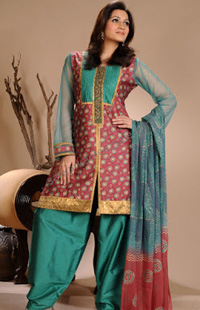 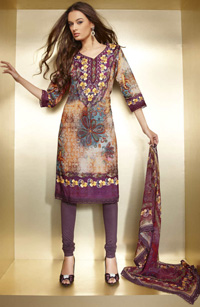 There are various sarees for different occasions and for women of different age. Young girls use half-sarees which consist of 3 pieces: a langa, a choli and a stole wrapped over it like a sari. Adult women use full sarees, simple for everyday usage and ornated for special occasions. Festive sari can be very-very beautiful, with embroidery, golden and silver embellishment, jewelry, mirrors and so on. There is even a special sari for women in armed forces.

Ghagra сholi (lehenga choli). This is another popular variant of traditional Indian female costume. It consists of lehenga (long pleated skirt with a lot of embroidery and embellishment on the bottom line), a tight choli (small tight-fitted blouse with short sleeves and low neck) and an odhni/dupatta (scarf that covers head and body). There are several types of lehenga choli that are used in different situations. For example, simple cotton lehenga choli is used for daily wearing, embellished with mirrors ghagra сholi – for folk dancing, fully embroidered lehenga choli – for weddings. 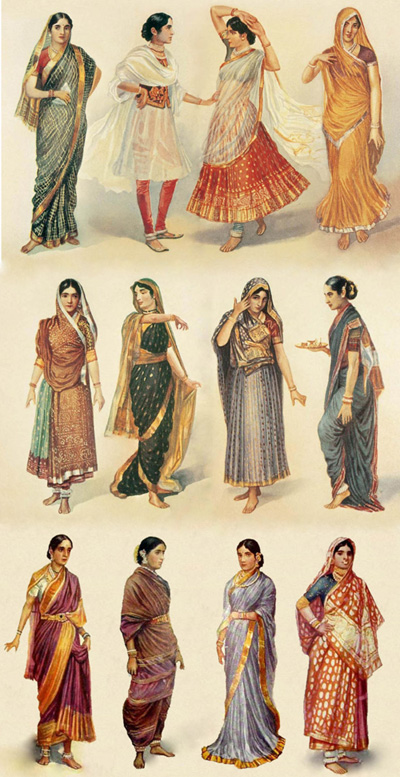 Salwar kameez. Salwar is a kind of suthan or pajama. Kameez is a blouse or top. Salwar Kameez is a very popular in India (mostly in the northwestern part) costume which consists of tunic top and loose trousers, narrow at the ankles. To finish the ensemble women use dupatta which covers the head and shoulders.

Churidar kurta. This costume consists of kurta (long blouse or tunic, which goes below the knee) and churidar (loose trousers, similar to salwar, but churidaar are loose up to the knee and tight from the knee to the ankle).

Mundum neriyathum. It is the oldest variant of sari. Mundum neriyathum is considered to be the traditional costume in Kerala, South India. It consists of mundu (large piece of cloth) and neriyathum (upper garment).

Mekhela sador. It is the traditional Assamese dress for women of all ages. It consists of 3 pieces of cloth. The bottom piece is called "mekhela" – a sarong, folded into pleats to fit around the waist and tucked in. No strings are used to tie the mekhela around the waist. Another part of costume is called "sador" – long piece of cloth with one end tucked into the mekhela and the rest of it is draped around the body. A fitted blouse is worn with sador to cover breasts. The last piece is called "riha" – narrow item, which is worn under the sador.