The Native American traditional art is so different from European, Asian, or African one that it is always exciting to learn more about it. When you take in every tiny detail and determine every character or even geometric figure depicted on Native American Indian articles of clothing and accessories, it fascinates you. And local beadwork and quillwork are world-famous crafts. It’s a pity such things are so rarely made today and by only a handful of artisans. For many people outside the US and Canada, using porcupine quills to create patterns on leather is something weird and surreal, but for Native Americans, it was customary.

This bag was displayed at the “Art of Native America: The Charles and Valerie Diker Collection” exhibition at The Metropolitan Museum of Art in New York. It is one of the most famous objects in the Diker Collection because it was photographed in 1845 being worn by the Reverend Peter Jones, who was a Mississauga Ojibwa man and was also the first ordained Native American Methodist minister.

Reverend Peter Jones traveled to England as a diplomat trying to secure the lands of his people. He was photographed in Scotland and it’s the oldest known photograph of a Native American that has survived. This bag is hanging prominently on his left side. So it’s an object that has great historical dimension.

The exhibit displayed at The Met Museum is missing its shoulder strap. 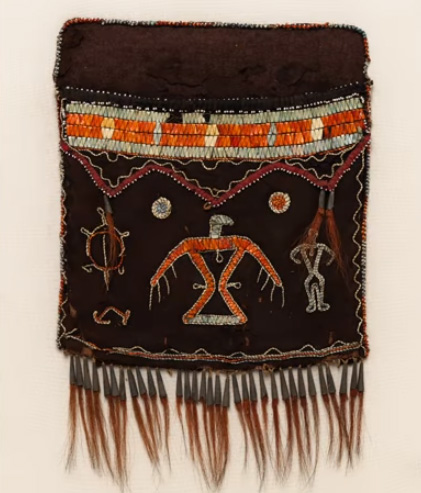 It dates from probably around 1800 and it’s typical of bags of this type that were produced throughout the Great Lakes area, mostly by Anishinaabe women. Such bags were made specifically for men to carry personal effects.

It’s constructed of black-dyed leather and ornamented with porcupine quills, with fringe of metal cones and dyed horsehair across the bottom. 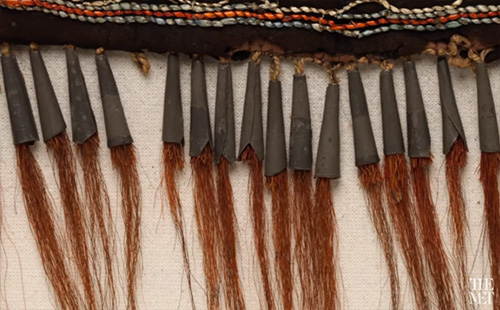 It’s a classic depiction of Anishinaabe or Woodlands world view, ornamented with images of spirit beings or manitous.

The most predominant form is a thunderbird or a thunderer in the middle, which is the principle power of the upper world in Anishinaabe world view. 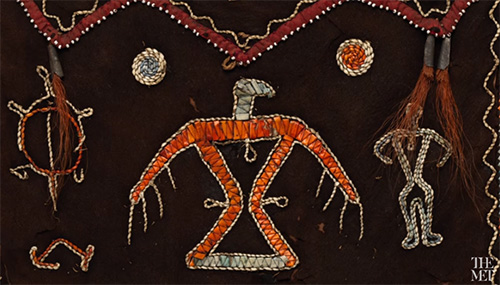 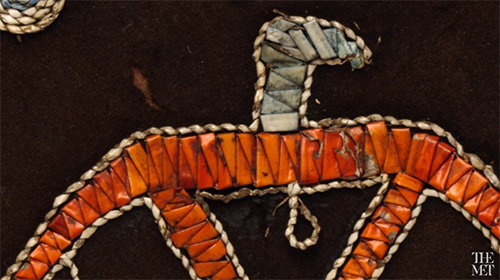 To its left, there is an image of a turtle, which represents the underworld and those powers that were strongly associated with healing, and then to the thunderer’s right, is a human figure that might very well be a protégé of a thunderer in human form. Perhaps it represented the owner of the bag, the scientists really don’t know.

Bordering the edges are wavy lines that are sometimes interpreted as water. But it may be that they represent the transmission of cosmic power, sacred power. 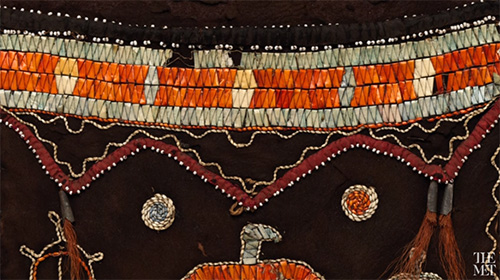 It’s essentially a drawing in porcupine quills on leather. 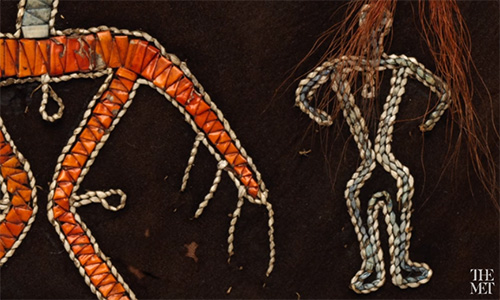 Quillwork is a time-consuming, exacting process, and one would think that the result would be rather mechanical. Actually, this whole image is filled with life. Those figures seem animated, they seem engaged with one another. They really are alive.