Modern Venezuelans don’t have a habit to wear the folk clothing every day. They even use it rather seldom on special occasions, such as weddings, national celebrations, and ceremonies. Though Venezuelan national outfit looks not too extraordinary or weird, locals prefer to use the western-style clothing instead of a folk dress. Nevertheless, the traditional costume of Venezuela is pretty and comfy. And it is the cultural heritage of this country, among many other colorful traditions.

Nowadays, beauty and fashion are very important for Venezuelans. The clothing traditions of Venezuela and modern tendencies in the fashion of this country differ pretty much. Historically, Spanish and Caribbean clothing traditions influenced Venezuela. Modern outfits have more in common with France and European style of clothing in general. Also, Venezuelans today are crazy about beauty, the perfection of appearance, and different beauty competitions. Plastic surgery is something ordinary and often found in this country. No one is embarrassed by it. Banks even offer cheap loans for this purpose. But let’s get back to the traditional Venezuelan costume.

The climate of this country is very hot and humid so Venezuelans use light and natural materials in their traditional costumes and in modern outfits as well. As we’ve mentioned earlier, local people are fond of beauty. That’s why the fabrics of their folk attires are multicolored and embellished with various patterns on the fabric. Venezuelan women use a lot of decorations and jewelry (but they usually are simple and elegant, not ornate and sumptuous).

Venezuelan men traditionally wear liqui liqui as the folk costume. This outfit consists of trousers and a jacket. The set can be made from linen, cotton, gabardine, or wool. But the color is mostly light: white, cream, beige, or ecru. The trousers are full-length and straight-cut. The jacket has long sleeves and a rounded Nehru-style collar (a kind of stand-up collar). The collar is fastened by a chain link similar to a cufflink called “junta”. This collar is the distinctive feature of Venezuelan traditional jacket. The jacket of liqui liqui has 5-6 buttons and up to 4 pockets or no pockets at all. 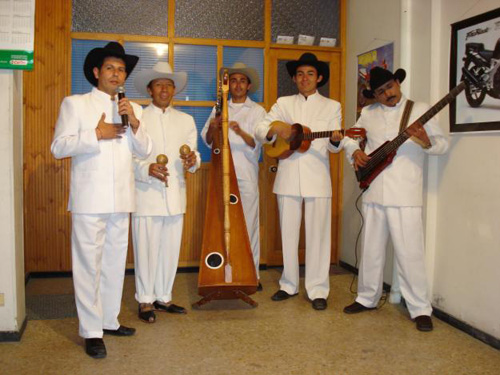 Male shoes worn with liqui liqui are traditionally alpargatas. These are open-toed sandals with a flexible sole made from jute rope. The upper part of these sandals can be made from cotton or canvas. Such shoes are typical for several South American countries.

Venezuelan traditional hat is also called “llanero hat” (llanero means “cowboy”). It is a starched cowboy hat. Similar headgears are typical for Latin America and even for southern regions of US.

Venezuelan women use very feminine garments. They traditionally wear long flowing skirts, blouses with one or both off-the-shoulder sleeves (or a similar one-piece dress), a lot of flowers and simple jewelry pieces (beaded necklaces and bracelets, large earrings, flower hair clips) to add some Hispanic flavor. 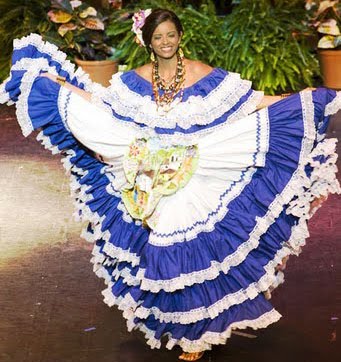 Woman in traditional dress of Venezuela. Photo from Kathystefany.blogspot.com

The skirts usually are decorated with floral patterns on the fabric. The blouses are often white. Both garments can be embellished with large ruffles. The female folk costume of Venezuela is bright, multicolored, and puffy. The decorations are cheap but elegant and Caribbean-style. Venezuelan women don’t use large gold pieces to adorn themselves. They prefer fresh or artificial flowers to decorate their hair and clothing.

do they wear egg

yes of course they wear egg. Duck egg, chicken egg and obviously ostrich egg.
Quote
#8 egg 2018-05-17 22:20
do they wear egg
Quote
#7 Anne 2018-03-27 21:27
Are you kidding me i don't like how good this website is.
Quote
#6 Landon 2018-02-20 14:25
I really like this information and it really help me learn about the Venezuelan culture!!!
Quote
#5 Ann 2018-01-09 12:28
A friend of mine is holding a Venezulan dinner party and would like us to wear something Venezulan. Where could I get one of these lovely dresses either to rent or buy (if not too expensive). I've searched Ebay and Amazon but no joy. Or if someone could lend me a dress for an evening and I will compensate accordingly. Many thanks Ann (email anncurrie1

outlook.com).
Quote
#4 Margie 2017-12-15 02:13
Brenda "There are liqui liquis for WOMEN too, you can either WEAR it with skirt or with pants. I have one because that's our formal uniform in my dance academy"

What is the traditional women's dress called?