Traditional weaving is an extremely important craft for Peru. The locals have been using woven garments and household items for thousands of years by now. And there’s even more to it. The native language of Andean people is Quechua, and originally it was an oral language, so Andeans needed some instrument to save and pass the stories, local history, and their thoughts and ideas to the next generations of just other communities. The woven textiles became a mean of communication between people and recording the knowledge. 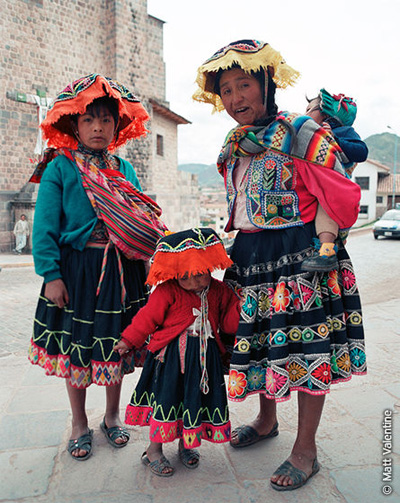 Women with children in Peruvian traditional costumes. Photo from Thegioidep.info

When a weaving is concerned, every small detail has a deep meaning: every stitch, pattern, color, place where the weaving design is situated, a way of using the woven garment, and much more. This craft is very ancient as well. Some Peruvian older weavers work with the techniques practiced earlier than 500 AD and rarely seen nowadays. Though, in modern days, the craft of weaving isn’t as popular as it used to be. New generations of Peruvians have exchanged the traditional woven clothing for industrially produced pieces. Still, some Peruvian activists are trying to change this sad situation and to promote the craft of weaving among the young Peruvians. They even get large grants from various international organizations for this purpose. Let’s hope that in a few decades, Peruvian traditional weaving will get back its position as the main clothing craft of the country.

Before making the traditional homespun cloth, the craftswoman (and usually, women weave in Peru) has to make some preparations. First of all, she needs some homemade yarn. The yarn is made from llama, alpaca, or sheep wool. People shear animals, wash the fibers, and then spin them into a fine yarn.

Spinning the yarn is one of the most complicated and important processes: about 60% of the time needed to weave a piece is spent on the spinning. Children are taught to do it since a young age. The tool used for home-spinning is ancient; it is called “drop-spindle” and it consists of a wooden stick with some weight at one end. The spindle is connected to a small amount of wool, dropped and spun. Under the weight of this tool and thanks to the spinning, wool becomes a thread which is winded around the drop-spindle (and later, in a ball of yarn). Peruvian females have perfected their skills to use a spindle. They can control the thickness of the thread and change it if needed. Of course, the thread must be even and long, without breakings. 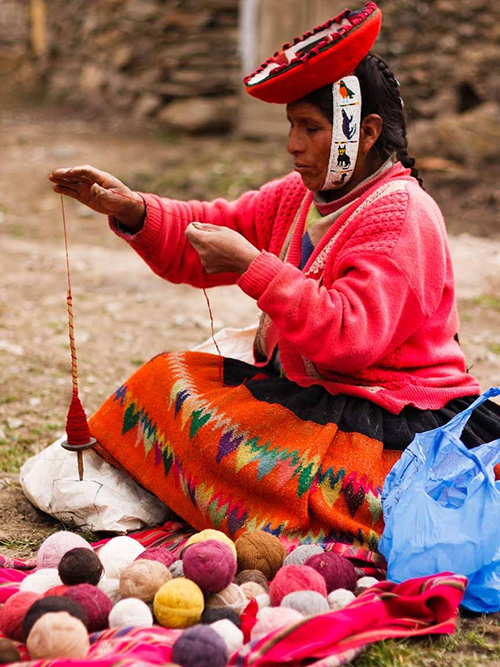 Peruvian woman is spinning the yarn with a drop-spindle. Photo from Epicureandculture.com

But at this point, the yarn is dull white or brown, while Peruvian woven fabric is always colorful and bright. So, that’s where the process of dyeing the yarn begins. Traditionally, Peruvian women used local plants, insects, and minerals to dye the threads, only the natural pigments. The previously gathered and dried material (for example, leaves or bark) is added to a boiling water in different proportions to give the yarn a certain color. When the threads are dyed and then dried, they are ready for the weaving itself.

But there is one last step before the process of weaving begins. The craftswoman chooses the color and pattern of the future piece. As you remember, this design is not just a load of pictograms and patterns. It is a composition that tells some story by each small detail, all the patterns are picked so that they are in harmony with each other. Making up the design of a future product is a weighty skill.

The traditional woven pieces in Peru are real masterpieces. The complicity of this craft is in the symbolism of every pattern. Peruvian weaving uses bright colors and many various patterns and pictograms – anthropomorphic, zoomorphic, and geometric symbols. The latter helps the weaver to embody her stories about the Quechua people in their natural environment. A lot of historical events are depicted in the weaving patterns, because, as you remember, people couldn’t just write them down to pass to the next generations. 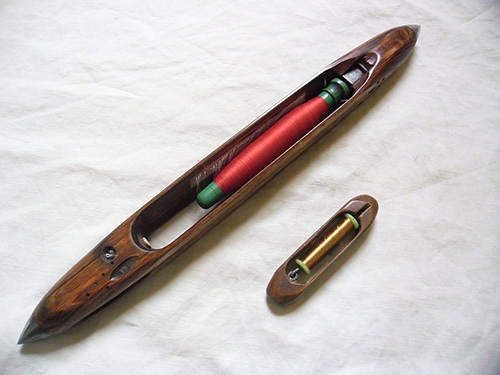 Some symbols of Peruvian weaving are being used for centuries, others are invented by modern craftswomen. Among the most popular pictograms, there are symbols of animals (llamas, condors, dogs, and other local species), symbols of nature (sun, moon, river, tree, flower, etc.), people (folk heroes, famous persons, people who matter personally to the weaver, or a human being in general). Though, in various regions and communities, the meaning of a certain symbol often differs much; even different weavers can interpret one and the same pictogram differently.

Peruvian woven pieces of clothing are most often multicolored. There is no way you can see a craftswoman dressed in the national costume of a plain dull color. Usually, the traditional outfit combines several bright colors and shades. The most popular colors are red, blue, pink, burgundy, purple, and brown. But dozens of other shades are widely used in weaving. That’s why the national clothes of Peru look very festive and colorful.

Weaving is a process that is impossible without a loom – special device used to weave cloth. Its main purpose is to hold the warp threads under tension to facilitate the interweaving of the weft threads. There are dozens of variations of the loom’s construction in the world but the main function is the same. Many countries have their traditional construction of a loom (for example, you can see the photos of Ukrainian traditional weaving looms, vintage and modern, here: Vintage wooden looms are still used by Ukrainian craftsmen) passed from one generation to the next and used for years. Peru is no exception. Peruvian craftswomen most often use two types of a loom: a backstrap loom and a four-post loom. 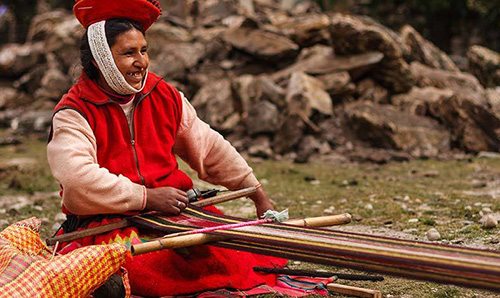 Peruvian woman in the process of weaving. Photo from Threadsofperu.com

The traditional Quechua backstrap loom is one of the world oldest forms of a loom. It is made from wood, bone, and strings. Peruvian backstrap loom is portable for women to use it wherever they are at the moment. That’s because weaving is an activity that takes all the free time of a Peruvian female – when she’s not cooking, taking care of children, or occupied with household chores, she’s weaving or spinning the yarn. In Peru, women often carry their weaving tools with them in a traditional carrying shawl called “lliqlla” or “manta”.

The backstrap loom consists of 2 main wooden sticks, a number of strings stretched between those sticks, 2 additional sticks used to make a pattern, a shuttle or bobbin used to interweave the weft threads, and several other parts. On the picture below, you can see the scheme of a Peruvian backstrap loom. 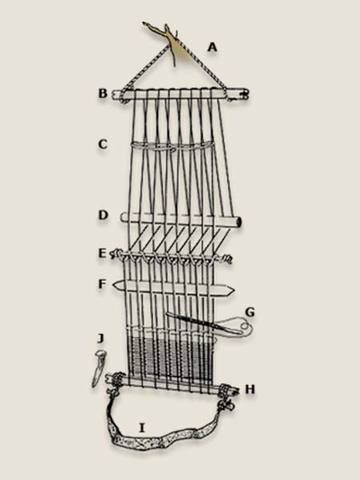 Scheme of a backstrap loom. A – rope attached to a pole, tree, etc. when the loom is in a working position; B and H – main wooden sticks that hold the whole construction under tension; C – additional string that keeps the yarns of the loom from tangling, when the loom is not in use; D and F – additional wooden sticks used to make a pattern; E – additional stick that connects the top and bottom rows of strings; I – backstrap fastened over the back of the weaver, it helps the craftswoman to control the tension of threads; G – shuttle or bobbin used to pass the weft threads through the warp threads; J – beater, small pointed bone tool used to correct the pattern if some of the threads aren’t in place

This weaving loom is rather simple and, at the same time, it allows the craftswoman to make the fabric of various thickness, with any patterns made by the interweave of threads or by color.

The four-post loom has an even simpler construction but it requires much more skill and experience from the weaver. It consists of 4 wooden sticks or posts hammered into the ground to form a rectangular and 2 horizontal warp beams tied to the short ends of the mentioned rectangular. The threads are stretched between the beams and the weaver sits at one end of the rectangular, on the ground. Some women add an improvement to the loom – they add two more posts and, therefore, get two interlocking warps, each in a separate color. The four-post looms are used in Peru more seldom than the backstrap looms.

Peruvian weaving is warp-faced mostly. It means that the weft threads are hidden behind the warp threads. The latter form the pattern, determine the color of a piece and serve as a front side. While the weft yarns are secondary, they only help to display the main pattern on the fabric. 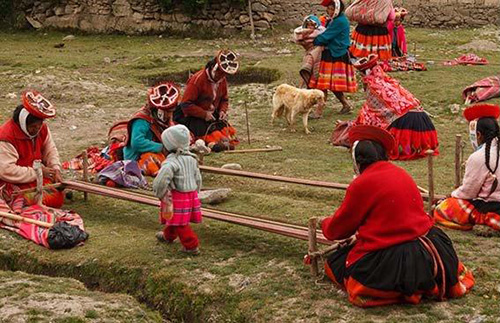 Peruvian women in the process of weaving with a help of a four-post loom. Photo from Threadsofperu.com

The most popular one is the complementary warp technique. It creates a pattern that is a positive on the front side and a negative on the back.

Discontinuous warp technique is very rare and hard to master in. It is currently disappearing in Peru because of its complexity. According to this technique, the pattern is changed along the length of the fabric. A six-post horizontal loom (a more complicated kind of a four-post loom) is used for this weaving technique.

The weft-faced weaving technique is among the few where the weft yarns are “in charge” of the pattern. This technique is used to make the tapestry. The pattern is created on a fixed loom frame. The craftswoman or craftsman (this certain technique is practiced by both men and women) works from the bottom of the weaving piece to the top of it.