Buffalo Plaid Lumberjack – can we call it Canadian national garment?

There is a whole discussion in comments to our article “Traditional dress of Canada. History and examples” about the existence of Canadian national costume. So, we decided to investigate this topic a little deeper. One of the garments considered traditionally Canadian is the buffalo plaid lumberjack. But can we really consider it a part of Canadian national costume? Where did it come from? And what it actually is, this mysterious lumberjack?

Canadian lumberjack is not a typical folk garment that we are used to. Actually, what is the traditional garment? It is a piece of clothing that is associated with a certain geographic area or a period of time in history; it usually represents the culture or identity of a specific ethnic group.

With many countries around the world, it is easy to discriminate their traditional outfit because it is something worn by the locals for centuries before this day. But Canada (along with the US and Australia) is a comparatively young country founded mainly by the emigrants from Europe. We won’t talk about the extermination of the local aboriginal population in this material – if you would like to learn more, just look it up in Wikipedia or google it. So, we have two options – to take the aboriginal traditional attire as the national costume (in Canada, these are Inuit, Ojibwe, Maliseet, Cree, and others) or to be content with much more recently invented folk garments. Unfortunately, there are too few representatives of the mentioned Native American ethnic groups today in Canada. So, we’re pressed to stick with the latter option.

Canada as a state is a mix of several main cultures – French, Scottish, English, and Ukrainian. The settlers from these four countries are the most numerous and made the most impact on Canadian culture. And one of them was at the origins of the buffalo plaid lumberjack, which is the object of our “investigation”.

The Canadian traditional lumberjack is a plaid flannel shirt in red&black color palette. This red and black checkered pattern is called “buffalo plaid” and it came to Canada from Scotland, more precisely with Scottish settlers, who brought the fabric and ready-made garments to the New World. It is one of the traditional Scottish tartan patterns. But this plaid design, with time, became iconic in Canada and is deeply incorporated in the local clothing style. 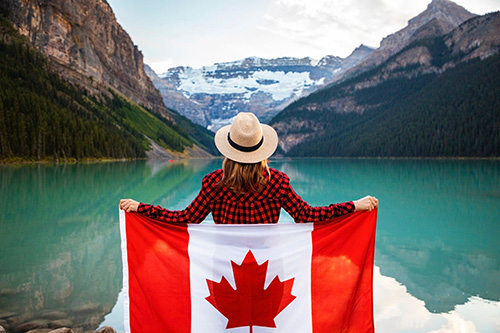 So, I guess we can call the buffalo plaid lumberjack Canadian traditional garment because it is a part of the local culture, strongly associated with Canada.

But, of course, it is not the only national clothing article in Canada, and we will continue to introduce you to the local folk garments, like parka, Calgary white cowboy hat, etc.

#1 Jay 2021-06-16 21:46
Who wrote this?
"extermination"?!
"too few"?!
There are more First Nations Canadians now than ever before.
The specific plaid style did not come from Scotland. But certainly inspired by Scottish plaid, because Canada is very Scottish in ancestry.
There are many original Canadian garments and clothing, from all the First Nations as well as from various European ancestry Canadians.
I suggest a much less negative and thoughtful article.
Also, Canada is one of the oldest democracies, and one of the few that never has had a civil war. The area was known as Canada for quite a lot longer than Canada gained full independence. (By the way, Canada is an older democracy by about 20 years than the UK!).
Quote
Refresh comments list