Hockey! Who could forget that bit of Canadian national pride? There's miss Canada Chanel Beckenlehner in the Canadian national costume at the Miss Universe show. All people love relationships with symbols and stereotypes in Canada. Maybe that's why this is the national dress that had everyone in Canada talking.

The mastermind behind the creation of this national dress is designer Alex Kavanagh.

"The costume I wanted to be very dramatic, big, and elaborate to compete with a lot of these huge costumes being produced by other countries, and so we went with our national hockey theme. We needed it to be big and splashy, so we've created an entire backpack made of hockey sticks", said Alex Kavanagh. 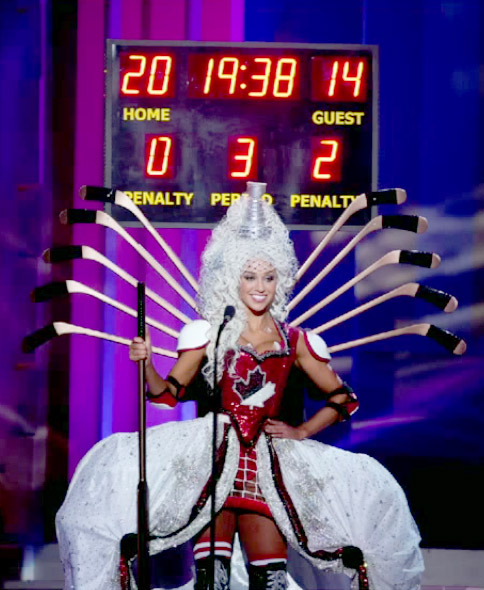 Ten hockey sticks, five on each side, symbolize the two teams well holding up a custom-made functional scoreboard.

A hockey net in there – the pene is the shaped crinoline, that's under the dress, is made of a hockey net. And you know, the designer went with that shape because she wanted to create the effect of the hockey rink on the back of the dress. So she needed a sort of a rectangular structure, and it just lent itself to become a hockey net.

Unbelievable stylized boots. And miss Canada's got the whole thing the Stanley Cup has - a bit of a tiara there. It's pretty incredible. Chanel really wanted to portray something that was very Canadian, and they looked at a ton of different references from iconic brands. 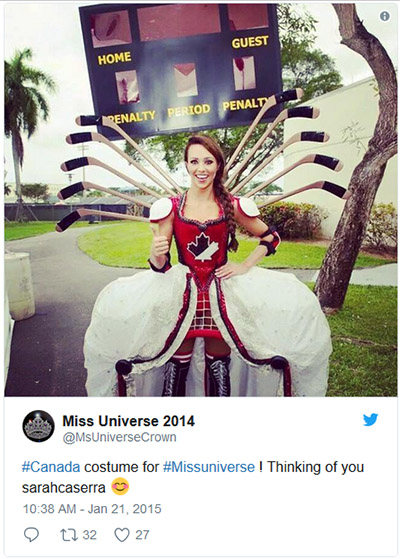 There's so many things that are Canadian, but what is recognizable in the international Marketplace? People from all other countries recognize Canada as hockey nation. And the designers thought, that was the best way to represent the country.

So that's interesting, some people are saying: "hey, this is way too stereotypical". 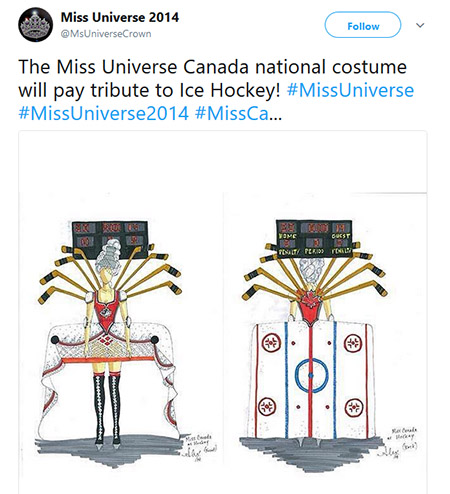 You're saying, we know it's a stereotype. Let's play with it well. Come on, it's the Miss Universe pageant. You're there to show your highlight. You're the most visible nature of your country's culture. And why not hockey? Alex Kavanagh is laughing at some people saying it's too stereotypical. Of course, it is.

#1 Colleen Dunlap 2019-06-14 19:40
I am totally embarrassed to be represented by this sexist, trashy, outdated, inaccurate, inappropriate, noninclusive notion of Canada.
A joke maybe but the world sees it and forms an opinion of our values.
Colleen Dunlap
Quote
Refresh comments list