We know a lot about Ancient Egypt and its fashionable clothing, jewelry, and makeup from the movies, pictures, and books. But how do you think, have you seen and heard everything there is to know? Of course, not. There are still curious facts about the traditional attire and style of Ancient Egypt that we are glad to share with you. For instance, ever wondered why wigs were so popular in Ancient Egypt? Or are you aware that on some Egyptian statues, the beards are removable and why?

The most important item of the traditional attire in Egypt was the “shenti”. The shenti was a white skirt-like garment, a piece of fabric that every single man in ancient Egypt wore. You could wear it in a variety of styles and lengths. Sometimes, you could pull it up between your legs to protect your private parts. 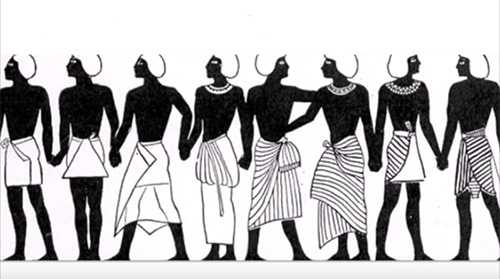 A shenti was the mainstay of Egyptian male clothing. Everyone wore shenties from farmers in the fields to slaves to pharaohs. And notice that pharaohs’ shanties stick out at the front – important people had starched shenties. And what do you think that symbolized? It symbolized an erection. This, of course, goes back to one of the continuums of fashion – sex and false advertising often.

Women were often very scantily clad. It had nothing to do with sex – the naked body simply wasn't taboo in Ancient Egypt. But an Egyptian woman would sometimes (to protect her skin, but also for fashion) wear this beautiful pleated dress, which is quite diaphanous, called a “kalas”.

And here is an illustration, showing the variety of ways that you could drape a kalas. Men sometimes wore it, too. 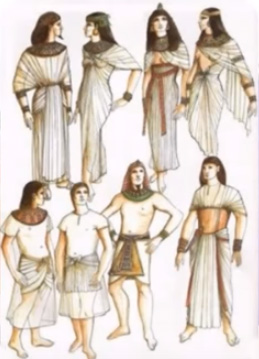 Also, of course, females used these beautiful beaded dresses. And here are true depictions from Egypt of women wearing these very dresses.

Now, a couple thousand years separate the two dresses on the left, but you can see they are almost identical. Little change in detail, fashion fads… But fashion changes when the world changes, fashion only changes when it needs to. And these beautiful beaded dresses were probably worn over a naked body and were worn by those who could afford it. There is a lot of beadwork here, so they were expensive. 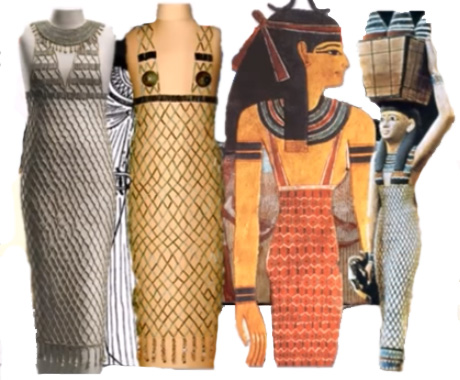 But it gives you an idea. First of all, the idea that nudity was not at all a taboo in Ancient Egypt. These dresses serve no function other than fashion and status and style. They don't protect your skin. It was about fashion. The Egyptians loved fashion and they understood it.

You can't think about Ancient Egypt without headdresses and crowns. There are so many of them. We’re going to give you only the most famous. You've seen these a million times, haven't you? It's called a “nemes” and it was made of starched linen. Some people think they were made of metal or gold, because of Tutankhamun and his sarcophagus. But no, these were made of starched linen. And they were striped.

When the nemes was tucked in underneath at the back, it was called a “khat”.

And you've probably seen these lovely blue crowns. This is called a “khepresh” and it is the blue crown of war, the Blue War Crown. So, whenever you see this depicted, it's either showing a pharaoh or a military hero, who's had a lot of victory in war. If it's part of a story on the wall of a tomb, for example, it's telling the story of some war.

The headdress Nefertiti was wearing and often is depicted in, is called a “Flat Crown”. This came later, from the New Kingdom.

The Egyptians loved their bling. These wonderful collars, these jeweled and beaded collars that are called a “usekh” or a “wesekh”. They were made of beads and they sat on the shoulders.

Also, there was so much gold in Ancient Egypt: pendants and necklaces, jewels with enamel work, rings, etc. You can also see a gold necklace shaped like bees. And a bracelet in the shape of a two-headed snake. Egyptians loved their bling very much. 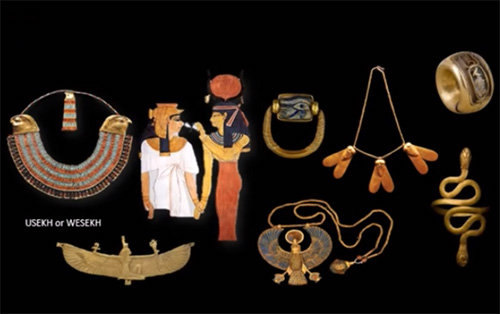 In some cases, the jewelry had a spiritual significance but often, it was jewelry for the very same reason we wear it now.

We all know that Egyptians wore makeup. They wore kohl around their eyes, and they used a lot of color. They would blend mineral with water or paste or sort of gum so that it would endure and stay on all day. 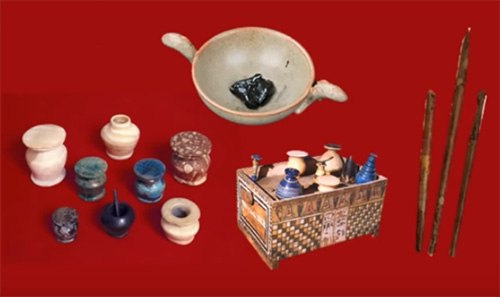 This is a makeup kit from Ancient Egypt. All of these little bottles and vessels for your different colors your different kohls; the kohls were put on with brushes and sticks.

But what about hair? That wonderful Egyptian hair… Sorry, a shocker for you. Ancient Egyptians shaved their heads. They took all the hair off their bodies with a pumice stone, and they shaved their heads. Both men and women. It was considered cleaner. There was a head lice problem in Ancient Egypt, so shaving helped to cope with it. And it was just considered hygienic and clean.

But what about hairdos? Guess what – wigs. Egyptians wore wigs. The wigs often were dressed, including beads and other decorations. The archaeologists find tons and tons and tons of wigs in tombs. Obviously, hairdressers were employed to produce wigs and dress them. 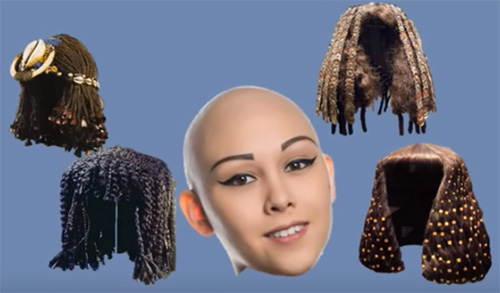 Wigs, by the way, were made of either human hair, or horse hair.

An important Egyptian sometimes grew a little sort of wispy beard on the end of his chin. He would dye it red with henna and then braid gold thread through. However, most Egyptian beards that we see on pharaohs and important dignitaries, were fake. They were made of copper or gold, and they were attached with a ribbon or a piece of leather that tied behind the head.

Beards signified wisdom in Ancient Egypt (same as in Mesopotamia), but each beard – each shape of beard and color of beard – signified something specific: an event or a ceremony.

And here is a fun fact about Egypt. On some Egyptian statues, the beards were removable, so that you could change your statue up if you like. That's so cute and kind of weird.