When people hear a phrase “Egyptian traditional clothing”, they think about the attire of the Ancient Egypt. But actually, the folk dress used in modern Egypt differs much from the wrap-around garments that barely covered the bodies of ancient Egyptians. Since the 1500s, citizens of Egypt tend to cover their body parts thoroughly. Locals inherited a lot of features from the clothing fashion of Ottoman Turks, Europeans, and Muslim countries. But some tribes of Egypt are still keeping their own centuries-old tradition in clothes, e.g. the Bedouins and the Nubians.

Though, in this particular article, we won’t talk about the mentioned tribes. We’ll dedicate a separate piece of writing to that topic in future.

The folk outfit of Egyptian men includes a long shirt called “gallibaya”, optional trousers, one or several outer garments, a headdress, and shoes.

The main male garment used in various regions of Egypt is a long loose shirt called “gallibaya” or “galabiya”. It has long narrow sleeves and a triangular neckline. Locals also wear a variation of gallibaya called “kamis” or “gamis” – a wide garment with very wide sleeves. The kamis is a piece used by fellahin – Egyptian farmers. 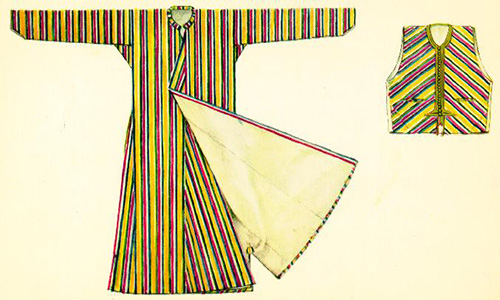 The traditional Egyptian trousers are called “sserual”. They are worn under the gallibaya sometimes, but they are optional.
The most widespread outerwear in Egypt is a garment called “kaftan” and worn over the gallibaya. It is a long coat-like piece with long wide sleeves. Kaftan is open in front and belted with a sash called “hizan”. Kaftan is often made from a striped cloth (half-silk, cotton, satin, brocade, etc.). 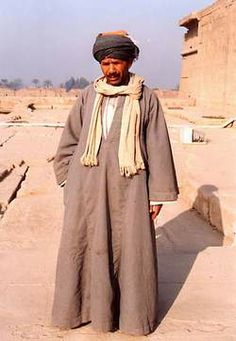 Egyptian traditional male outfit consisting of a gallibaya, an overcoat, a turban, and a scarf. Photo from Egyptiantravelap.weebly.com

Over the kaftan, various other outer garments were used by locals in different regions of the country and historical periods. They are a “binish” – dark fabric overcoat with wide sleeves and simple cut; a “djubbeh” – overcoat with long sleeves that has a more complicated design than the binish; a “jubbah” – long wide-sleeved overcoat buttoned halfway down. The mentioned garments are similar but each of them has its own distinctive features. 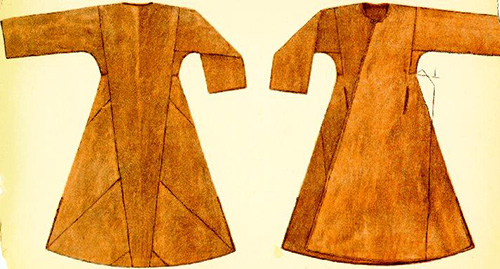 Egyptian djubbeh overcoat. It has a rather complicated cut. Photo from Indiana.edu

Traditionally, Egyptian men covered their heads with various headdresses. The pieces served as a protection from the hot sun, from sand, and other severe weather conditions. There are 3 main headdresses used in this country: a skullcap, a tarboosh, and a turban. The skullcap (called “taqiyah”, “'araqiyeh”, etc.) is a small round cotton headdress often worn under the turban or tarboosh. It is a very common and comfy headgear. The tarboosh is a fez – red cylindrical brimless cap. The turban is a long piece of fabric wounded around the head.

Egyptian women, as well as men, prefer multi-layered light and loose clothing. It is connected with the religion (many locals are Muslims) and the climate of the country. Women tend to cover their bodies thoroughly, often including the head.

The female traditional outfit in Egypt consists of a long robe called “gallebaya”, baggy trousers used as an underwear, several layers of outerwear, a headdress, and shoes.

The gallebaya is an ankle-length robe with long sleeves. In the rural areas, women often use gallebaya as the main garment. Poor females also do that. But in the cities, women wear gallebaya only as indoor clothes or as an undergarment. They use different outerwear pieces on top of the gallebaya.

Egyptian women in the traditional clothes wearing elegant jewelry pieces. The female on the right has a mandil veil on. The woman on the left is wearing a more modern costume. Photo from Pinterest.com

Another light and loose garment is worn by Egyptian females for the outdoor activities. It is called “tob sebleh”. It is a very wide full-length dress made from cotton fabric.

Women in Egypt wear trousers underneath their robes. These are thin cotton baggy pants tied below the knee and falling to the ankle. The trousers are called “tshalvar” or “shintijan”.

Female outerwear includes several garments. There is a piece similar to the male kaftan – women’s variant of the garment is called “yelek”. It is more tight-fitting and has longer sleeves. Also, yelek has an open neck and is buttoned down from the bosom to the waist. The hem of the garment is slit on both sides. Yelek is always worn over the gallebaya and baggy trousers. 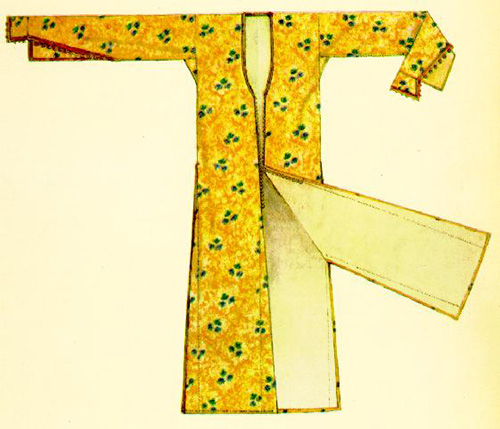 Egyptian yelek – female variation of a kaftan. Photo from Indiana.edu

Over the yelek, Egyptian women traditionally use an overcoat djubbeh or binnish. Both garments are wide overcoats with wide sleeves. They are similar to the male pieces but more delicate, with a more feminine design.

Female headdresses used by the local women are diverse. But mostly, they wear different veils: a hijab, a niquab, a burqa (you can find more info about these headdresses here http://nationalclothing.org/122-traditional-headdresses-of-muslim-women-do-you-know-the-difference-between-hijab,-niqab,-and-burqa.html), etc. A beautiful delicate veil that differs from all of the other headgear is called “mandil”. It’s a rectangular, sometimes extremely long, veil that covers the lower part of a female face. Mandil is often made from lace, intricately knitted threads, netting, etc., unlike the cotton or synthetic veils that are usual among the Muslim women. Mandil looks very festive, unusual, and authentic.

Egyptian women traditionally use a lot of gold jewels. These pieces are the pride of a female and even her family, the indication of a class and wealth of the family, her own capital that can’t be easily taken from her (unlike the money), etc. When a man courts a potential bride, he presents her with gold jewelry. Also, the parents of a girl provide her with golden pieces while she’s still single.

The most popular jewelry items used in Egypt are various delicate pendants, wide necklaces, large earrings, thick bracelets, headdress adornments, etc. The desert people of Egypt (including Bedouins and other ancient tribes) use lots of jewels that are made from gold, silver, stone and ceramic beads, etc. Local women’s upper bodies are pretty much covered with jewelry. The craftsmen of these regions are very skilled in jewelry making. The females from other areas of the country usually use fewer pieces.

Traditionally, gold and silver jewelry were used by local females. Though the jewelry business continued to develop, and jewels imitating gold appeared in Egypt. After the invention of imitations, many locals went for them. More and more often, poorer people bought imitations, while before, they couldn’t afford any jewels at all. Women were able to sell their original jewelry and replace them with imitations when they needed money, and their husbands didn’t even suspect. Frankly speaking, for Egyptian women, the tradition of receiving and wearing jewels is a great help for their financial independence in the male-centered world.

Thank you for actually documenting this instead of pretending that Egyptians are "just Arabs" as some do. I live in diaspora and was separated from the Egyptian side of the family- I am trying to hold on to the culture, but there is so much misinformation and politics that try to erase Egyptian identity for the sake of Arabization. Thank you.

Thank you back. Your culture is really amazing
Quote
#1 Idris 2019-07-17 19:53
Thank you for actually documenting this instead of pretending that Egyptians are "just Arabs" as some do. I live in diaspora and was separated from the Egyptian side of the family- I am trying to hold on to the culture, but there is so much misinformation and politics that try to erase Egyptian identity for the sake of Arabization. Thank you.
Quote
Refresh comments list