Traditional costume of Algeria. Three civilizations are mixed in the design of Algerian folk dress

Algerian fashion is very unique. It was formed by the influence of three different civilizations: Arab, African, and Mediterranean. The geographical position of Algeria historically was the cause of culture mixing: meetings, trading, and exchanges between three worlds were common. No wonder, Algerian clothing traditions are so rich and diverse.

Algerian people strictly keep their clothing traditions. Even today, they wear folk dresses every day, not to talk about special occasions. Many local designers use the traditional features of Algerian vintage outfits in modern clothes. The traditional garments are also widely used in the rural areas.

A burnous (there are several spellings, e.g. burnoose, bournouse, etc.) is a long woolen cloak with a hood traditionally used by Algerian men. By the way, many Algerian garments are hooded – it protects the wearer from the sun, desert winds, and sand; in the mountain regions, it protects from the cold, rain, and snow. Usually, burnous is white and made from the fine thin wool.

A burnous is often very festive, decorated with embroidery, tassels, and patterns on the fabric. This garment is used in many Arab countries. In the 19th-20th centuries, the burnous became a part of European fashion thanks to the soldiers of the French army from Algeria, Tunisia, and Morocco. They brought the habit of using a hooded cloak over other garments to Europe. The burnous is still used in Algeria today. 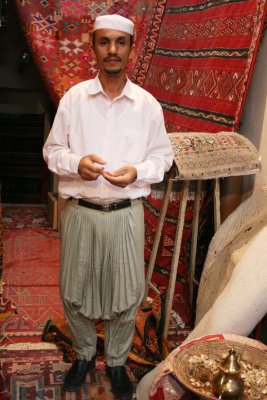 Another piece of Algerian traditional clothing is a djellaba. Actually, this garment is used in several Mediterranean countries. It is a loose long-sleeved robe with a hood used by both men and women. Djellaba is made from wool (traditional variant) or cotton (modern robes). Its color tells about the marital status of the wearer: light colors for married men and dark brown color for bachelors. Traditionally it was ankle-length or ground-length but modern djellabas are a little shorter. Men’s djellaba is more loose and plain than women’s one.

The traditional Algerian male headdress is a fez. It is a felt tight-fitting cap in the shape of a short cylinder. Usually, a fez is red. This garment is very popular in the countries that used to be a part of the Ottoman Empire.

The traditional female outfits are usually bright, colorful, modest in design, and richly decorated. The fabrics used to make clothes are cotton, wool, and velvet. The decorations are embroidery (often with gold and silver threads), lace, patterns on the fabric, jewelry, and so on. 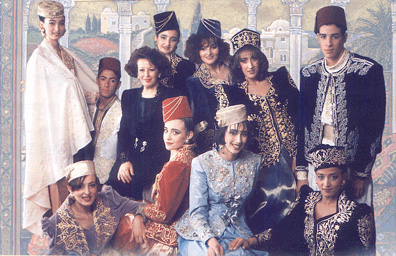 Traditional male and female outfits of Algeria. Photo from Algerianembassy.org.my

Algerian women wear different long dresses that cover their body from head to toe. The traditional loose trousers are often worn underneath the dress. Females also cover their heads with various headgears. A lot of Algerians are Muslims, so women mostly hide their bodies and heads from prying eyes.

One of the traditional Algerian dresses is called “karakou”. It always consists of a velvet jacket embroidered with gold threads. Usually, the jacket is worn with the traditional Arab trousers called “saroual”, but modern karakou can be used with a long skirt.

Algerian women sometimes drape a fouta (a rectangular piece of thin fabric with different patterns) over the saroual. The origin of this garment is Tunisian but it is widely used in other North African countries.

Algerian traditional festive dress is called “djeba”. It is often worn by brides. Djeba is ornate, delicate, and beautiful. It can be decorated with lace, embroidery, beadwork, sequins, jewelry, and other decorations. 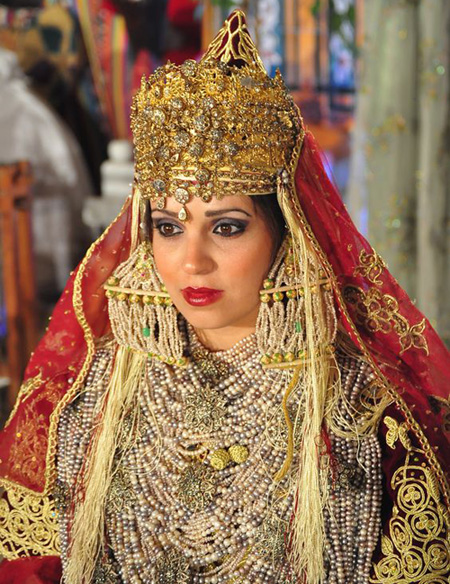 Very rich and ornate wedding costume of Algeria. This dress was registered on the UNESCO Representative List of Intangible Cultural Heritage of Humanity. Photo from Pinterest.com

Female headdresses in Algeria are various, rich, and beautiful. For special occasions, women wear ornate and exquisite headgears, often embellished with gold embroidery, gems, gold and silver decorations, lace, etc. Such headdresses usually consist of a skullcap or fez and a veil. In everyday life, they prefer simple veils, rectangular pieces of cloth, headscarves, and etc.

Algerian traditional female shoes are made from natural materials and often are richly decorated with embroidery and beadwork. The leather is a very popular material, as well as velvet.