Botswana is a country in Southern Africa that has rich and interesting clothing traditions. Many of them were formed under the influence of colonizers and missionaries who appeared in Botswana in 19-20th centuries. Today traditional Tswana outfit is a mix of Western-style or Victorian Era dresses with the pieces of clothing that are pure Tswana (for example, kaross – traditional blanket made from animal skins). Some costumes of ethnic minorities in Botswana also deserve special attention. We're talking about the Herero dress.

In general, we can divide the history of Tswana traditional clothing into 2 periods: pre-colonial period and missionary period. In accordance to this, we have 2 styles of clothing typical for this African country.

In pre-colonial period, Tswana people wore clothes made from skins and fur of local animals.

Men wore a loin-skin called "tshega", a "kaross" (rug or blanket made from animal skin), a skin cap, sandals and belt of tails (the latter is allowed only for warriors). And, of course, various ornaments were a very important part of a male costume. It could be copper wire necklaces, bead strings, armlets and etc.

Women wore an apron in front called "khiba", a skirt behind called "mosese", a "kaross" to cover the upper body, and a lot of ornaments (necklaces, bracelets, rings, earrings etc.). A skin called "thari" was used by women to carry babies on their backs.

Kids wore clothes that differ from adults'. Toddlers often didn't use clothes at all. Older boys used a small flap of skin in front and nothing else. Though usually they also added ornaments to their dress. Girls wore a fringe of strings (made from skin or bast) and a lot of ornaments. When children got older, girls began to wear mosese and khiba, and boys – tshega. 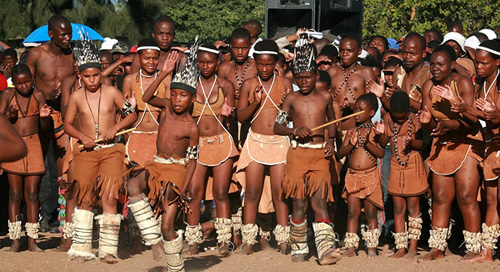 Tswana people in traditional clothing made from animal skins. Photo from Xoafrica.com

Clothes made from animal skins often showed the social class, gender, age and status of people. For example, poorer Tswana used fewer pieces of clothing, and these garments were made from antelope skin. Rich Tswana, at the same time, wore coats made from 15-18 sewn together furs of such animals like wild cats, jackals, hears and similar.

The ornaments played an important role in the life of Tswana people. Tswana of every age and gender used them, and often in large quantities. Usually, Tswana ornaments were made from copper wire, leather, animal teeth etc. Later they began to trade with other tribes and countries, so they added glass beads and seashells to the list of materials.

To complement the traditional appearance of people in Botswana in pre-colonial period add the mix of ocher and animal fat which was used to cover the clothes and skin. Such ointment helped to protect the skin from the hot sun and rough winds. Nowadays Tswana people still use different ointment and cosmetics to protect their skin, but they don't manufacture them at home anymore – just buy them in stores.

The missionary period in Botswana started in the mid-19th century. A lot of missionaries moved to Southern Africa in that period of time, and they brought some European traditions with them. One of the main new traditions was the clothing tradition. Missionaries wore more European garments and tried to dress local people in similar clothing. Gradually they managed to change the whole clothing tradition in Botswana. Locals began to discard garments made of animal skins and use fabric instead. Despite the fact that skins were still used by some people even in the 20th century, such garments mostly remained in the past.

Mary and Robert Moffat were the missionaries who caused the biggest change in traditional Tswana dress. During the 19th century, people in Botswana began to mix styles: they used modest European dresses combined with karosses (traditional blankets made from skins) or woven blankets. Such style of clothing emphasized the changes in Tswana lifestyle. People still tried to keep their folk traditions and at the same time borrowed new beliefs and customs.

Besides Tswana people, Botswana is populated by some other ethnic groups. One of the biggest communities is Herero people. It is an ethnic group that inhabits several Southern African countries, including Botswana. They also have their unique traditional costume which has everything to do with the complicated and painful history of this tribe. After migration from their natural territory and several Herero wars with colonizers these people at last acquired new cultural features and traditions.

Today Herero people wear their national costume called "Herero dress". It is derived from Victorian Era. This outfit was brought to Southern Africa by German missionaries in early 20th century. But nowadays Herero people consider it the part of their culture and clothing tradition. 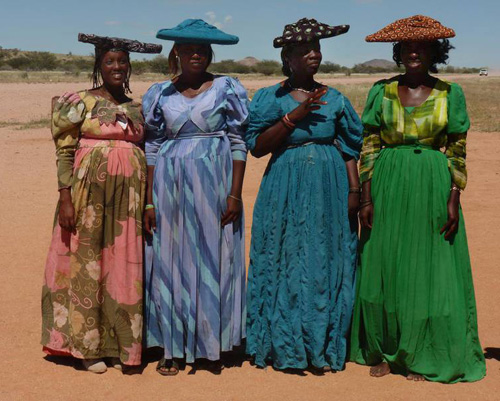 Herero dress is long and heavy. There are many petticoats underneath to make the dress puffy and wide. Herero dress covers most of the women's body. Actually, it is a kind of indication that the woman is married and shows her body only to her husband.

Herero dress is complemented with an unusual hat. It is a horn-shaped headdress made from rolled cloth very similar to cow horns. Herero people are cattle farmers (it's their main occupation), that's why they chose such a strange headgear.

#12 Lorraine 2021-08-22 19:08
Ahaa, its fastidious discussion regarding this paragraph
here at this weblog, I have read all that, so at this time me also commenting at this place.
Quote
#11 Mikel 2021-08-21 16:03
I like looking through an article that will make people think.
Also, thank you for permitting me to comment!
Quote
#10 Andy 2021-08-19 06:53
I am sure this article has touched all the internet people, its really really
fastidious piece of writing on building up new blog.
Quote
#9 Berenice 2021-06-02 09:04
wonderful publish, very informative. I wonder why the opposite experts of this sector do not notice this.