The Federal Republic of Nigeria is a not very large, though rather populous country of West Africa. About 150 million of people live in Nigeria. So, the clothing traditions of its population are various. Some of the traditional dresses in Nigeria root back to ancients tribes who lived here centuries ago, others were formed by the influence of British, Portuguese and French colonizers (19-20th centuries). Today many people in Nigeria use modern clothes, western style of attire. But still there are a lot of Nigerians who prefer to wear the traditional dress of Nigeria in everyday life.

Several ethnic groups live in Nigeria. The biggest are Yoruba, Igbo and Hausa-Fulani. Each of them has its own national clothing. So, let's talk about their traditional dresses one by one.

This people prefer very bright and outstanding garments, especially the clothing for special occasions like weddings and funerals. Some consider the national clothing of Yoruba people to be traditional costume for Nigeria in general. Maybe it's because of wide popularity and bright colors. Yoruba people wear the following pieces of clothing:

The traditional attire for Igbo women are various wraps. There are wraps for everyday life – cheap and easy, made from coarse fabrics; and wraps for formal occasions – made from expansive imported fabric, with patterns on cloth and different decorations. 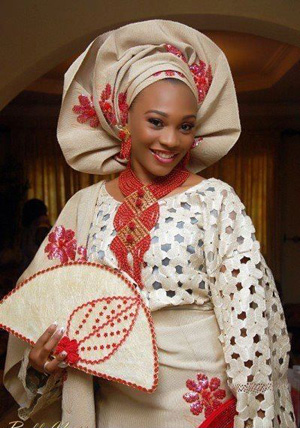 The national dress for Igbo men consists of cotton wrappers, shirts, and sandals. Wrappers for day to day usage are made from cheap fabrics, and wrappers for holidays and events are made from better, more qualitative fabrics.

Men's traditional outfit consists of a wide-sleeved robe called "babban riga". It is floor-long, with long wide sleeves. This garment is an equivalent to Yoruba's agbada. This dress is very popular among Nigerian men as clothes for formal occasions. Hausa-Fulani men also wear a headdress called "fula", it is a round cap. 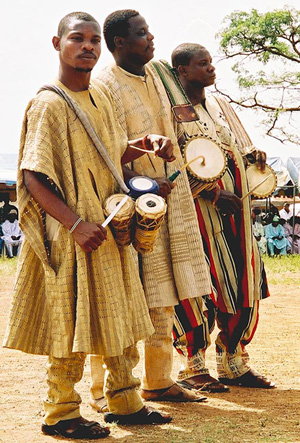 Some pieces of clothing worn by Yoruba, Igbo and Hausa-Fulani and other people became traditional for the whole country. For example, buba, iro, sokotos, fula. Also there is several clothing pieces about which we haven't talked yet. It's "kaba" – women's single-piece dress that has many various styles and variations. Iborun or ipele – a scarf which is either tied around the neck, or put diagonally across the body. Abeti-aja – men's cap which has longer sides than fula. 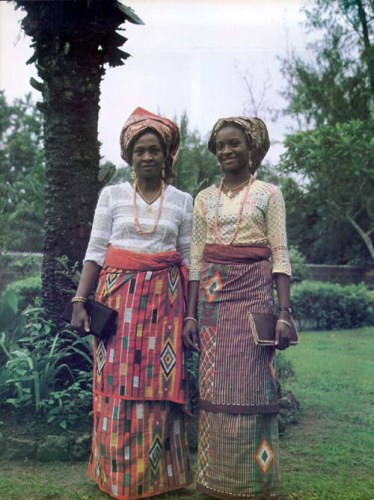 In general Nigerian national clothing is bright and colorful. Tie-and-die technology of coloring is often used. Usual fabrics for Nigerian attire are lace, jacquard, adire and ankara. Also Nigerians like handmade jewelry very much. They make jewelry from natural materials (like glass, stones, wood, ceramics) and wear them in great quantities.