Palestinian embroidery styles – and folk clothing styles in general – were formed somewhere around the 2nd-3rd century B.C. and developed throughout the millennia after that. By the 10th century A.D., practically all of the rules, techniques, ornamentation symbols, etc were already established. They changed comparatively little since then. Let’s look at some of the characteristic features of Palestinian needlework. Did you know that a whole lot of European embroidery patterns were brought from the Arab world during the Crusades and incorporated here?

The material is based on the lecture of Hanan Karaman Munayyer, co-founder and president of the Palestinian Heritage Foundation.

Palestinian embroidery styles – and folk clothing styles in general – were formed somewhere around the 2nd-3rd century B.C. and developed throughout the millennia after that. By the 10th century A.D., practically all of the rules, techniques, ornamentation symbols, etc were already established. They changed comparatively little since then. Mostly, those traditions were kept and passed from one generation to the next. In every region, there were certain styles of clothing with certain embellishments and accessories recreated again and again for centuries, with slight changes but keeping the main features and ideas.

In Palestinian traditional needlework, cross-stitch is very popular. This stitch is used practically in all parts of Palestine. And it is also called “fallahy” in Palestine because originally, it was used by the local peasant women, who are named “fallaheen” in Arabic. But it is not the only embroidery technique typical for this country.

Among Palestinian traditional needlework techniques, there is one very curious embroidery technique – the couching. It is very typical, particularly, for Bethlehem area. This embroidery stitch is special because it is very different from our usual stitches. People take a gold or silver thread (it is also said the silver or silk thread was dipped in gold water to sort of make it gold-plated), put it onto the fabric, and sew the thread to it. This is a great way to create intricate patterns because you don’t have to count threads or make schemes, you just set the thread in a shape or pattern you need it to look like and attach it to the background. There are many samples of couching embroidery in Palestine that date back to the 11th-13th century.

There is a variety of traditional embroidery patterns and symbols often seen on folk clothes. A lot of people think that some of these needlework designs are taken from European embroidery, but actually, that might not be true, as most of them are old ornaments that are traditionally used on Palestinian land for centuries. Let’s look at some of the most common needlework patterns and typical symbols.

This embroidery design in the shape of the English letter “S” is often found on Palestinian and other Arabic garments. It represents a leech, a creature that was highly treasured by ancient doctors. That’s why it inspired Palestinian women to immortalize these creatures in the local embroidery patterns. 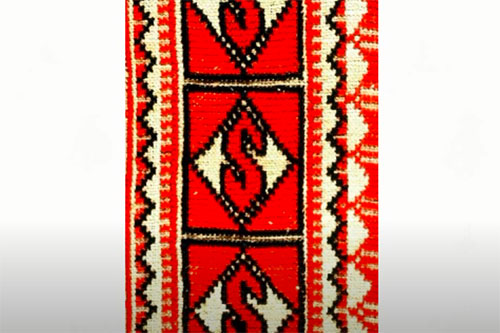 Leaf details and goblets of wine

There is a specific needlework pattern that includes a combination of leaves and a goblet of wine. It symbolizes prosperity, well-being, and happiness. This design is very, very old. 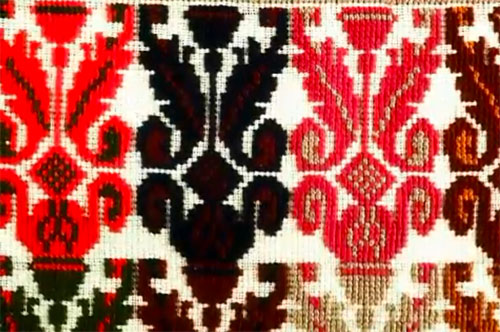 It is a stylized symbol that represents a palm tree. The meaning behind this design is survival and longevity because palm trees can grow even in a desert. You can often find these symbols on sleeves of women’s dresses. For example, in Ramallah region, practically every dress is embellished with palm tree designs. 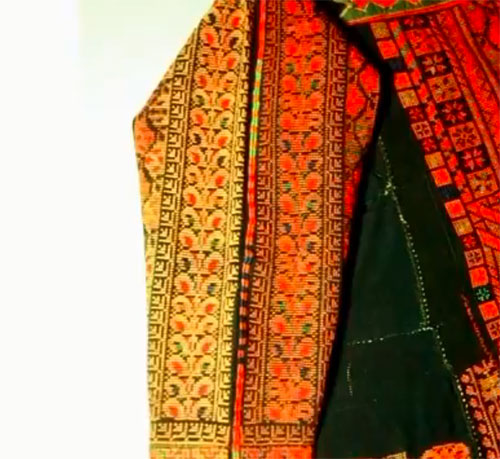 Different variants of interlacing designs are very typical for the Middle East and Palestine, in particular. 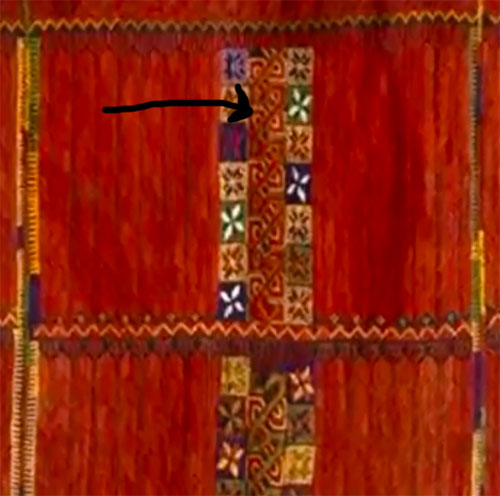 Such patterns are also very popular in traditional Palestinian needlework. The birds usually are depicted facing each other, and between them, there can be a symbolic image of the Tree of Life. 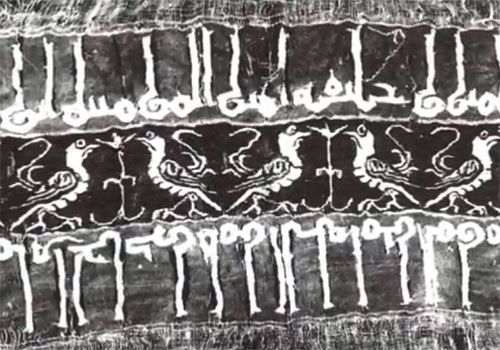 If you’re interested in Palestinian folk clothing and traditional embroidery and want to find out more about it, there is a book “Traditional Palestinian Costume: Origins and Evolution” by Hanan Karaman Munayyer. It will help you to learn a lot more on this topic than one article can contain. There are also plenty of great photos in this book.