Al Sadu is a traditional weaving technique in the United Arab Emirates. Just as many other folk crafts around the world, Al Sadu is close to disappearance. Fewer and fewer Emirati women practice it and teach the youth how to weave using Al Sadu technique. But still, Bedouins are a rare ethnic group that thoroughly keeps the old traditions. Hopefully, this craft will also survive. But if not, use this chance to watch the traditional Bedouin weaving and learn more about it, while you still can.

Traditional weaving, known as Al Sadu in the United Arab Emirates, is a handicraft of the women in Bedouin communities who live in the desert and in small oasis villages. These communities keep herds of goats, sheep, and camels from which they collect wool which they use for weaving. The Black desert tents called “beit al-sha'ar” are made from Al Sadu – the women weave many panels of black goats hair, which are then stitched together. 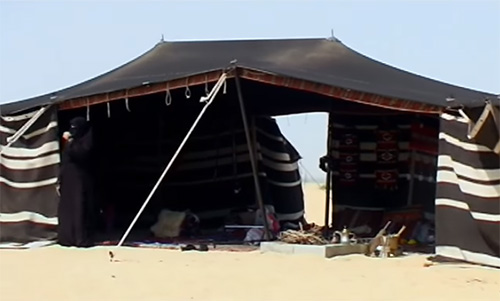 Men are usually responsible for shearing the sheep and goats, and this takes place over a week in the springtime. The men shear the sheep close to the tent, using a sharp knife or scissors. The wool is then collected, cleaned, and washed.

Based on knowledge of using wool and natural dyes passed down through the generations, Bedouin women have developed the skills and techniques of Al Sadu weaving. The wool is first spun into rough yarn. Women sit on the ground, surrounded by piles of wool, and use a simple wooden drop spindle to twist the threads together. 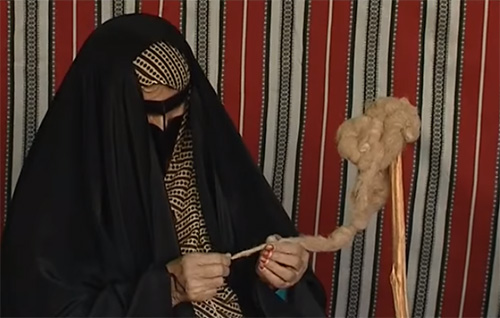 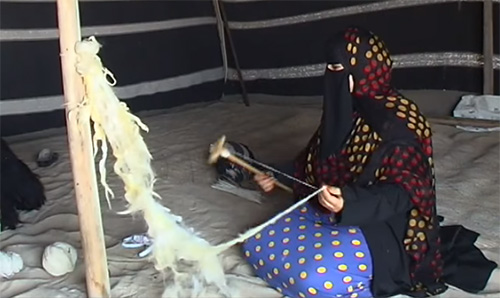 Some of the yarn is kept in its natural colors but other is dyed at this stage. The traditional colors used in Al Sadu weaving are white, brown, beige, and red. Formerly, the natural dyes came from plants such as henna, turmeric, indigo, and saffron but more recently, chemical dyes are used. These new dyes are mostly in keeping with traditional color schemes. After dyeing, the skeins of wool are washed with water and hung up outside the tent to dry for several days.

“We put them [dyed skeins of wool] here after dyeing, and leave them for two days. Then we count and roll them up in bundles. Later, we air them and this time, the process of drying is almost finished. We roll each color separately: red, black, blue, and green. Then, we spin it again with the spindle and roll it into a ball again”, explains one of the Emirati craftswomen.

The dyed wool is spun again and formed into balls of wool. The wool is now ready for the weaving process. The women set up the portable ground loom on the floor. Al Sadu weaving is a form of warped-face plain weave – a set of stationary threads are first tied along the length of the loom and their colors will form the basis of the patterns to be made.

Wool is wound onto wooden shuttle which is passed by hand between the threads. Each time the shuttle passes, the threads are settled with another piece of wood. The term “Al Sadu” is used to refer to the loom, the weaving process itself, and the woven products. The length and width of the loom determines the size of the finished product.

A gazelle horn is also used to pack down the weave to make it tight. “We take the horn from the deer when they bring us the animal on hunting day. We usually take the horns, as we use them for our Al Sadu weaving”, adds another artisan.

Weaving is also a social activity. As women work together to spin wool and set up the loom, at the same time, they chat together, exchanging family news and stories. These collective work gatherings, involving girls and women from different age groups, are also ways in which folktales and proverbs are shared and passed down through the generations. These gatherings are also the traditional means of transmission of the knowledge of weaving. Al Sadu is a very intricate craft and is normally acquired through a long apprenticeship procedure. Girls learn by watching older women and are gradually given various tasks to do, such as sorting out the wool. As they increase their competence, they become involved in more complex tasks, like spinning and setting up the loom. 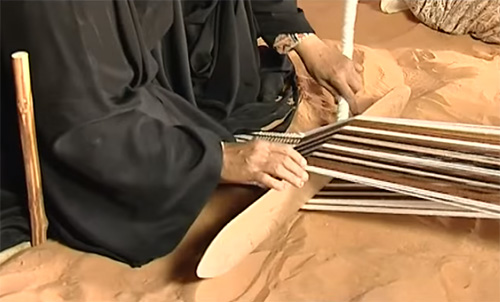 The patterns of Al Sadu weaving are very distinctive, mainly in the form of narrow bands of geometric design. All of the patterns, motifs, and associated symbolism and meanings are learned and passed on by observation and participation. 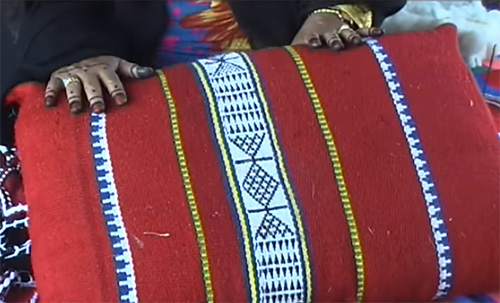 The weavers would make soft furnishings for the home such as floor cushions and rugs, and accessories for camels and horses, like saddlebags, ropes, and bridles. Our saddle weavings used to be part of the daily necessities of desert people but now, they're mainly used as furnishings in traditional houses, decorative elements in camel racing, and for national heritage celebration.

“We place it [saddlebag] on the back of the camel and then we add another piece on the other side of the saddle. We put the saddle here and the rider is sitting on it”, narrate the craftswomen. 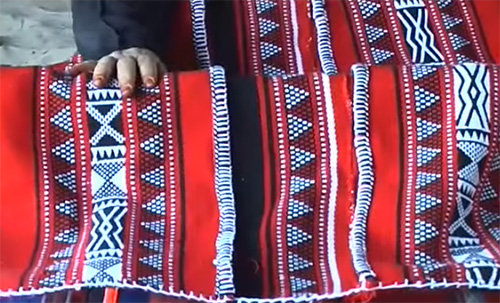 The recent and rapid economic development of the country has had a serious impact on the pastoral mode of life. The dispersal of the Bedouin communities and their subsequent settlement in urban areas have weakened the sustainability of bearers of this tradition. There has been a rapid decline over the past few decades in the numbers of women, the tradition bearers practicing Al Sadu. Exact figures for the number of Al Sadu weavers in the country are not known but estimates vary between a hundred and fifty to two hundred women, nearly all in the age group 50 to 70 years of age. 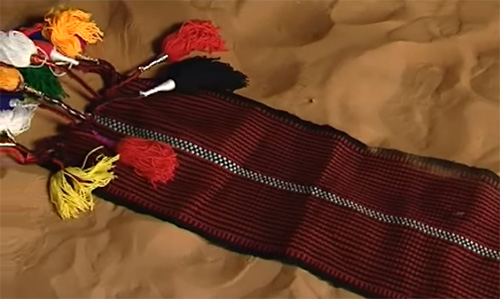 Concern about the rapid decline in the number of Al Sadu weavers, as well as their increasing age, has led to various community and state initiatives to try and reverse this trend. Local community women's groups have been formed to promote the Al Sadu craft in order to market the goods and provide a source of income for women in the villages. These initiatives encourage the weavers to continue their craft and remain in their communities. In addition, newer forms of training such as courses within heritage groups and NGOs have been developed. However, it is proving difficult to attract young women to learn the skills of Al Sadu. Unless a process is put in place to make this profession more attractive to young women, the numbers engaged in the craft will decrease and the heritage tradition is likely to die out. There is, therefore, an urgent need to safeguard the Al Sadu traditional craft as an important part of Emirati heritage and protect it from disappearing. This is why many government institutions and NGOs in the UAE are supporting efforts to save Al Sadu, to raise awareness about the need to recognize it as authentic heritage, to develop it and transmit it to future generations through educating and training women from a young age, as well as finding channels to promote and market products both locally and globally.

Inscribing Al Sadu on the UNESCO Urgent Safeguarding List will encourage the UAE to further its efforts to preserve this threatened heritage tradition and enhance its future visibility as one of the symbolic components of national identity.