National costume of Lebanon. Sleeves of traditional female dresses can be attached and detached

Modern Lebanon is a very fashionable country, one of the most stylish in the whole Arab world. But the majority of Lebanese wear western-style clothing today, instead of their own traditional outfits. The national costumes of Lebanon are still worn in the rural areas where traditions are kept more thoroughly. But clothing traditions of this country are as diverse as the ethnic composition of Lebanon. During its history, the country was under the rule of Roman, Persian, Greek, Arab, Ottoman Empires, and also France recently. Each of them left a trace in the life and traditions of Lebanon. And it makes Lebanese traditional costume all the more interesting.

In Lebanon, the clothing traditions are rather different for the urban and rural areas. They always were. Especially it applies to women's costumes. Though, there is one feature of Lebanese traditional female clothes which is common for both – city and village dwellers. They all try to cover most of the body, including the head. Urban women use long black outer cloaks when they leave their houses. They also cover their faces with a veil. Muslim women usually wear hijab, but Christian women in Lebanon also cover their bodies – with cloaks, scarves, and veils. Lebanese females sometimes take their headscarves off when there are no men nearby. Though, the scarves can be quickly brought up over the head and put in place.

Women in urban areas traditionally wore large belts, beautifully embellished and decorated with colorful glass, gems, agate, pearls etc. The belt buckle was big and ornate, too. The most beautiful and expensive belts were used with a wedding outfit. Also, Lebanese women like jewelry. They use a lot of it: gold and silver necklaces, rings, earrings, bracelets, head discs and so on. The number of jewelry traditionally was an indication of wealth, and love of the husband for his wife.

Women from the rural areas used simpler costumes with less decoration. The garments were embroidered just a little or embroidery could be replaced by colorful appliqué. There is one special feature of Lebanese traditional female dresses: they had (and sometimes still do) long sleeves that could be attached or detached if needed. Such sleeves were very richly embroidered and embellished. Many women wore these sleeves with their usual everyday dresses to make the attire festive and beautiful. Even today colorful embroidered sleeves are sold separately from dresses. Often females tied the sleeves at the back during dinner or another activity to keep them clean and allowed them to swing during dancing. 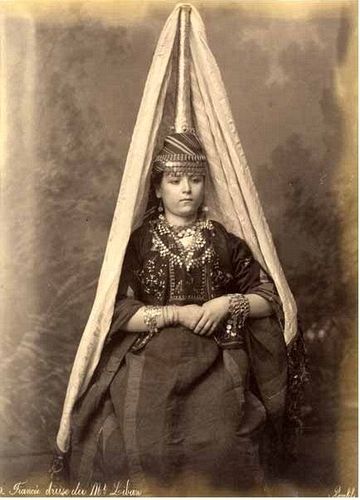 Lebanese bride in traditional outfit. The photo was made in 1880

Lebanese women use tie-dyeing of the fabric for their clothing. Handmade tie-dyed cloth has simple patterns of dots and circles. This technique is very old, but it is used by local women even today. Though, nowadays the process is much easier and faster.

The traditional costume of women of any class consists of a long dress (usually with long sleeves), a short jacket made from satin, silk or cotton, with minimal embroidery and appliqué, a cloak or scarf to cover the head and body, and sometimes baggy trousers.

Women's shoes were kabkabs. These are wooden shoes of a very unusual shape. They were used in Lebanon since the 14th century. Wealthy females wore ornate kabkab shoes, decorated with mother of pearl, intricate patters, and carving. The upper part of the shoes was made of leather, velvet or silk. You can read more about kabkabs and other interesting shoes here: Top-10 most offbeat traditional shoes around the world. 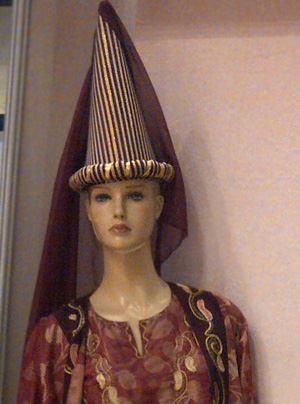 One of the classic Lebanese headdresses is called "tantur". It is a very high cone with a long piece of cloth (usually, silk or silk brocade) attached to the top of it. The cloth reaches about midway down the back. Traditionally tantur was used by recently married women. The origin of this headgear is unknown. Though similar headdresses were used in Mongolia in the 13th century, and in some European countries in the Middle Ages.

Male national clothing of Lebanon usually consists of baggy trousers, a shirt, a vest, jacket or cloak, a belt, a headdress, and shoes. It often is multilayered. Dark colors are predominating though the colors of festive costumes are much brighter. The striped cloth is also used to make men's clothes.
Everyday clothing traditionally consists of black or blue baggy trousers, white shirt, a dark vest, a black or red wrap-around belt, shoes, and a headgear. Such costumes still can be seen in the rural areas. Male clothing in Lebanon is very comfy and created due to the local climate conditions, so Lebanese men are in no hurry to get rid of their traditional outfits. 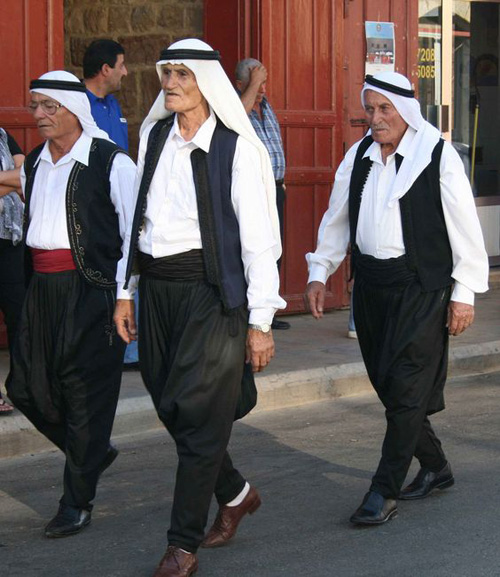 Festive male costumes in Lebanon are bright and have some decorations on them. Jackets and vests are embellished with embroidery, atlas ribbons, and metal decorations. The difference is also in the fabric, but not in the cut of a costume.

There are several traditional headdresses worn by men. The most popular today is keffiya, a headscarf used in many countries of the Arab world. But fez is also used, as well as the traditional short, cone-shaped, brown felt hat. The latter headgear is the oldest in Lebanon. Today it is mostly used by the oldest men while younger Lebanese wear keffiya instead.