Cypriot national costume is very similar to a Greek one, but it has its own cultural peculiarities. The traditional outfits of men and women in Cyprus are charming, modest, and beautifully adorned with embroidery and other folk techniques. The male baggy pants look unusual to a foreigner but in a good way. And the women’s sayia dress with its low neckline is perfect for breastfeeding – although, you won’t see anything inappropriate because of the embroidered underwear that covers the body. Anyway, if you have never seen Cypriot folk clothing, definitely make up some time to look into it.

The traditional shirts are typically silk, especially festive garments. Cheaper fabrics like cotton can be used as well for day-to-day shirts. The original Cypriot shirts were collarless, but later, people started to add collars.

The waistcoats were different for different occasions. For example, simple daily vests were plain and dark, without any embellishments. The most ornate waistcoats were made from velvet or fine wool and adorned with embroidery created with the help of metallic wire or thread.

The traditional pants of Cypriot males are called “vraka”. They are sewn from handmade cotton. And these trousers are always baggy, made from a large piece of fabric gathered into many large pleats. The design of the vraka traditionally showed the financial capability of a man, because the fabric was expensive and a person had to spend a lot to buy or order vraka pants. 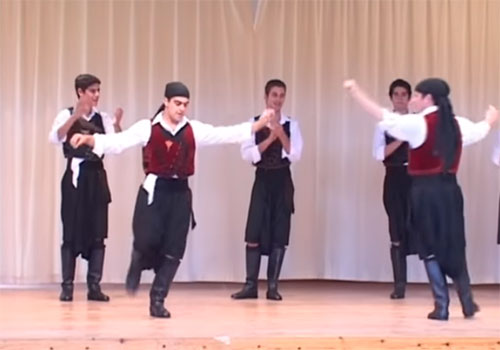 Underneath the vraka, Cypriot men wear another pair of knee-length pants as underwear. These are made from white cotton or flannel. The cut is similar to the vraka trousers. And it was traditionally trendy for this undergarment to be 1-2 cm longer than the vraka so that the edge peeked. So, men often wore festive underpants adorned with embroidery on the lower border of each pant leg.

The vraka trousers are belted with a cord called “vrakozoni” (functional belt) and another belt – a more festive one on top.

The festive belt is called “zostra”. It is handwoven from woolen yarn. It looks nice – wide and long (20 cm x 2.5-3 m), with black and red stripes, and with tassels at the ends.

To the belt, men attached a dagger called “tsiakkoudi” and a purse for various small items.

Of course, with high leather boots, men needed high thick socks to protect their feet and make it comfortable to walk. Such folk socks are called “klatses”, they’re woolen, black, and knee-high. Some men use them only during the cold season, others all year round.

In the cold season, males wear coats or overcoats. They are usually heavy and made from wool.

The last item of a men’s wardrobe is a hat. Men use fez caps (red skull-caps), “kasketo” hats made from cashmere, straw hats, and other variations of headdresses.

The most popular women’s garment is a “sayia”, a dress with an opening in the front. It is an authentic dress the local women wore until the 19th century. This is a festive and costly dress, made from silk, damask, and similar fabrics. The design and decorations vary from region to region a bit.

As sayia opened in the front, it was handy for women with babies – they could do the breastfeeding without much effort.

Underneath the sayia, females wear a long underwear item, a shirt with embroidered trimming at the hem.

On the top of the sayia, is an apron – simple for daily use, embroidered for special occasions. 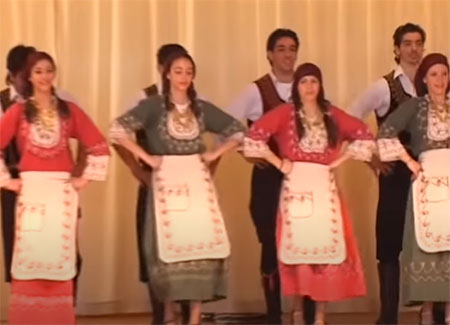 In some regions, women traditionally wore knee-length dresses combined with white shirt and underpants. The shirt peeked from under the dress at the chest and cuffs; the pants, embroidered at the bottom, were visible from the knee down. The dress was belted with a kerchief.

Also, Cypriot women can use a white shirt, long and wide skirt, and a short black jacket as the traditional costume.

Female headgear can include a fez cap, a kerchief, or a shawl of specific design (with a bow at the side). Young maidens in Cyprus traditionally wore their hair uncovered, plaited into 2 braids.

Women wear shoes or boots in winter with their folk outfit, but the footwear hides under the hems of other clothes, as skirts are usually floor-length or at least ankle-length.