Traditional clothing of Bosnia and Herzegovina – striking mix of Balkan, Oriental, and Mediterranean

The national attire of Bosnia and Herzegovina is unique and interesting not only thanks to its diversity but also because it got some features from Balkan, Oriental, and Mediterranean cultures. It’s a curious mix of different traditions, styles, and symbols. But all in all, the local folk costume looks beautiful. Unfortunately, it’s out of everyday use. But that’s understandable – people don’t make their clothes by hand anymore, and natural materials are much harder to produce these days than modern synthetic fabrics. Still, authentic folk costumes of Bosnia and Herzegovina can be seen at folk festivals, which is wonderful.

Up until the late 19th century, all of the clothing pieces in Bosnia and Herzegovina were handmade from locally available materials. Some garments were made by every woman herself, others were bought from artisans who specialized in the production of these particular items.

In short, the men’s traditional attire of Bosnia and Herzegovina consists of a white shirt, baggy pants, a small waistcoat, a wide belt, a headdress (usually, a fez), optional outerwear, hand-knit socks, and leather shoes.

The women’s apparel includes a white shirt, a skirt and apron or wide baggy trousers, a bodice or vest, a headdress (a fez with a veil or some other variant), jewelry, optional outerwear, hand-knit socks, and leather shoes.

All of the rural folk outfits in Bosnia and Herzegovina can be roughly divided into 3 types:

Every type has its own typical features and peculiarities. But, of course, there are plenty of other features that help differentiate the outfits from various districts and ethnic groups.

We’ll tell you more about the characteristic details of each type of costume in other articles to fully disclose the topic.

What materials were available in Bosnia and Herzegovina for the production of clothes? Mostly, they were linen, hemp, wool, and leather. Day-to-day clothes were always made from these fabrics.

Interesting fact: festive shirts and blouses were made from pure linen, but to produce everyday shirts, women mixed linen with hemp to save a bit. Also, hemp is coarser, so it added durability to the garment.

But perhaps the most used material was wool. And it’s easily explained – cheap, simple to work with, less labor-intensive, and available in large quantities. Sheep were a must in the mountainous regions of the country. Also, this material can be used to make a wide variety of clothes, particularly outerwear.

Cotton was a rarity at first, as it was imported from other countries. So, people started to make festive outfits from cotton, and mostly in cities. To the rural areas, cotton came only by the end of the 19th century.

Leather (raw leather, to be precise) was a popular material for footwear – peasant shoes called “opanci”, “fašnjaci”, “putravci”, or “oputnjaci” in different regions of Bosnia and Herzegovina. It was sheep and goat skin. 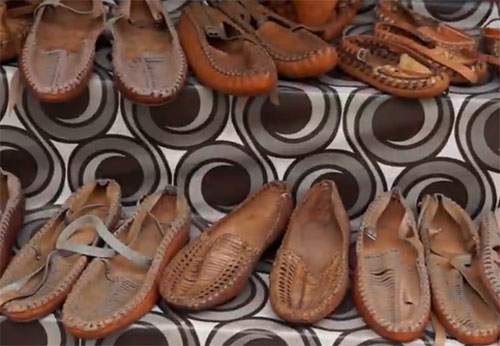 Today, traditional attire can be seen mostly in museums and at folk festivals. People don’t wear such clothing in daily life anymore. But even so, many families possess vintage garments they got from their parents, grandparents, or other relatives. The knowledge about the folk dress of Bosnia and Herzegovina is alive in the 21st century.