At the Marashlyan Photo Studio (situated in Yerevan, the capital of Armenia), one can wear an Armenian costume, listen to Armenian music, and acquire knowledge about traditional Armenian costumes, while being photographed. This business serves its main purpose wonderfully: it brings money to the owners and popularizes the Armenian culture and crafts among ordinary locals.

“The idea of repatriation was spoken about, we tried to keep various traditions that connected us to Armenia alive, and these discussions continued when I got married… What I mean is that the idea or thread was always present, you can call it a thread or something else…”, says Emma Marashlyan, the photographer and owner of the studio. 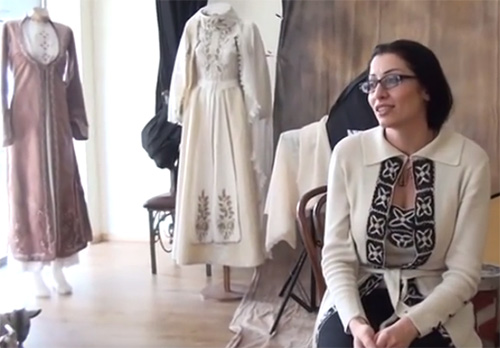 Emma Marashlyan with some of the costumes

The longing for Armenia and the desire to raise their children in Armenia brought Emma and Vartan to the homeland. Emma decided to practice her second profession – photography – and to emphasize everything that is Armenian within that sphere. After long discussions with her husband, they decided to open a photo studio where they could provide people the opportunity to be photographed in traditional Armenian costumes.

“We seem to have lost the idea of the traditional family photo, just to have a traditional photo in the house of the whole family – with the grandmother, grandfather, father, mother, sister, and brother. Now each of us are photographed separately. I wanted to restore that because I have photos now where a whole family is photographed. And it is a great pleasure to see the final result and the feeling people get seeing that they are one unite in the photo. Probably, that comes first, then, naturally the foundation of the photo studio lies in the national costume, and when I dress people, I also tell them about the meaning of the costume. Of course, I am not an ethnographer, but what I know is precise – I’ve taken the information from books, various links, etc. That is, I give all I know. This symbol, this pattern, the way a rifle should be held, the sward in its sheath. I have many friends who give me advice on a specific image or share their knowledge. I have managed to create an environment, where people help me to continue the creative process”, explains Emma.

Costumes from Artsakh (former province of Armenia, later it was called the “Nagorno-Karabakh Republic”), Vaspurakan (former Armenian province; today, it is situated in southeastern Turkey and northwestern Iran), Aleksandropol (one of the largest cities of Armenia; now, it is called “Gyumri”), and Cilicia (the Armenian Kingdom of Cilicia or Lesser Armenia used to be an independent kingdom outside Armenia; today, it is a region of Çukurova in Turkey) can be found here, together with accessories, such as jewelry, scarves, and trinkets.

There are four prevalent colors in the Armenian traditional costume – the apricot which symbolizes prudence (wisdom), red – courage, blue – heavenly justice, and white – pureness. The costumes for the Marashlyan Photo Studio are made by a designer and director of the Teryan Center, Lilit Melikyan. 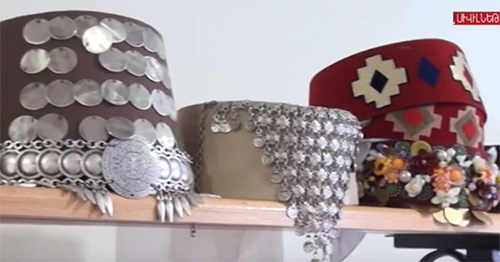 Some Armenian headdresses used in the photo studio

“When you see that you have wonderful arts and crafts which are on the verge of extinction… I think many nations have appropriated the culture and ingenuity of our people. And an effective way to combat this is to disseminate, retain, carry, and display it. This would be a more productive way of promoting our arts and crafts, instead of making announcements on the television that it’s ours and this is who we are”, comments Lilit.

Emma and Lilit’s cooperation began after the Marashlyan couple decided to order costumes for the whole family. Emma wore the first costume at a friend’s wedding. 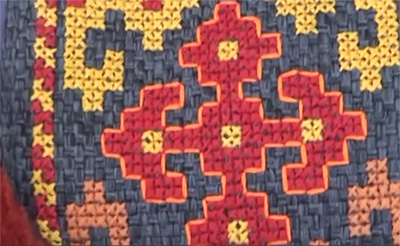 Lilit meets with ethnographers before creating the costumes, who pinpoint the elements that can be used, the ornaments to be stitched. The mannequin’s dress in the studio is an example of a costume from Vaspurakan.

“This is improvisation, it can be considered creative, although we try to preserve the original as much as possible. Here we have diverged a little – for example these adornments brooches should be silver, but have been replaced by a non-precious metal. Although we have the real version as well”, Lilit tells us. 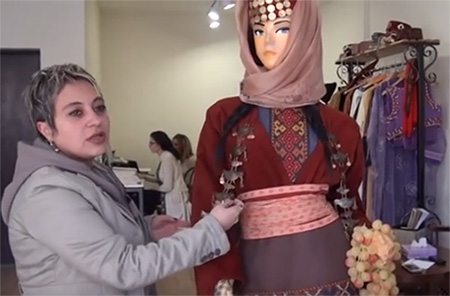 Lilit Melikyan with Armenian female attire designed by her

“For the men’s costume, I can say that these blouse and pants are one of the most valuable pieces we have. If you’re wondering what is valuable, take a closer look – the blouse and the pants are completely embroidered. They duplicate the real clothes as closely as possible. I can’t say that it is exactly the same, as it is impossible to match the fabric, thread, colors of what existed 100 years ago with the fabric manufactured now, but we have preserved it like this. Why have Armenians embellished the chest with embroidery, why have they done longer sleeves, why will you see colorful stones on the pants which resemble beads to protect against the evil eye..? We have preserved all of this, exploring everything. I would not be lying if I told you that this took almost four months to be completely embroidered”, the designer adds. 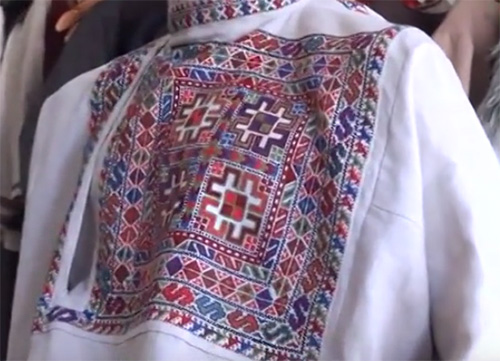 Rich embroidery on the front of a male shirt

While taking pictures, Armenian music plays, and Emma dresses the customer with her assistant, talking about the costume, meanwhile trying to recognize the character traits of the guest, which in turn helps to create an image.