In this article, we will talk about corsets and, particularly, about how very tight corsetry harmed women’s health and even killed them in the Victorian era. The mid-19th century was a period when the most tight corsets were worn. And while looser bodices and stays aren’t dangerous and could be even useful, very tight corsets really can be the killers. But still, for almost 100 years, whalebone and steel corsets were a symbol of aristocracy, civilization, and affiliation to the culture of the British Empire.

Part of being the ideal Victorian woman was looking just right. Whatever your physique, a corset came in handy. In fact, this was essential.

Corsets kept everything under control and they meant self-reserve, and that was vital to the Victorian woman because the opposite was just excess and freedom and flesh flying everywhere, and once she did that, the world might fall down.

The corset predates the bra. Its function was to support the chest and help take the weight of up to 14 pounds (over 6 kg) of clothing.

And women always wore the chemise underneath a corset – you would never have worn your corset next to your skin. 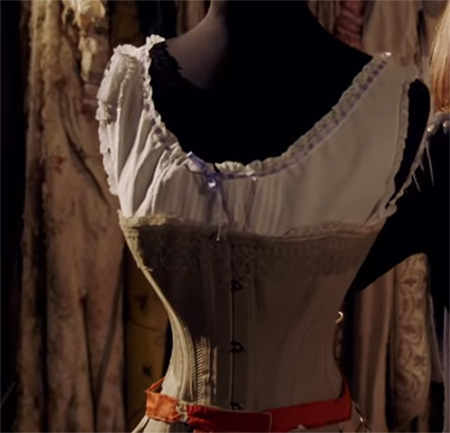 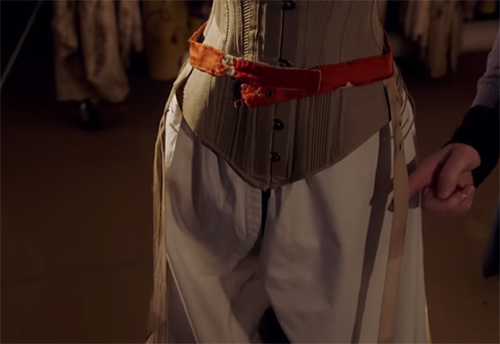 The Symington factory manufactured corsets that were affordable for everybody. They did all of their own artwork and printing for all their corsets.

This underwear may look beautiful, but women were unwittingly paying a terrible price. In the 1860s and 70s, corsetry became increasingly extreme. By the mid 19th century, the ideal female form – the corseted female form – was everywhere: in newspapers, magazines, journals aimed at women. And the celebrities, the actresses had it, the dancers had it, the fashion plates had it. This impossible figure. They were drawn, simply because no woman would look like that. 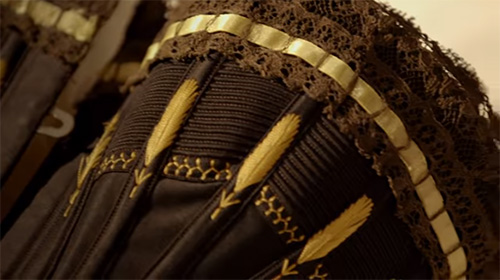 What kind of corsets and how restrictive they were, depended on your age, your class, your occupation, and how fashionable you were.

It was recommended that a corset was to be worn at all times. And there was no escape, not even in the colonies. In all parts of the British Empire, no matter what the weather and the climate was, females had to wear a corset. You were considered a loose woman if you didn't wear your corset. It demonstrated their character and it demonstrated that they were fine and upright citizens, fit for the British Empire. 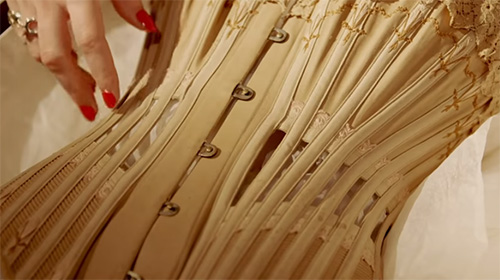 Ventilated corset for the tropical regions

These robust cages of whalebone and steel were turned into potential killers by one surprisingly small technological advance – the metal eyelet. The metal eyelet made it easier to get the look because it was possible to lace tightly without the material tearing, as it previously would have done. 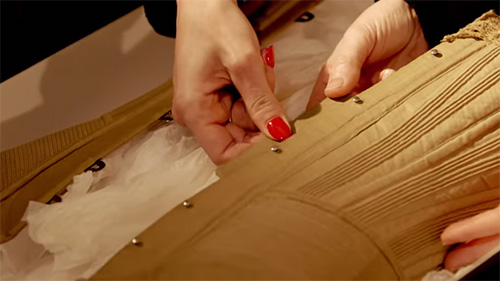 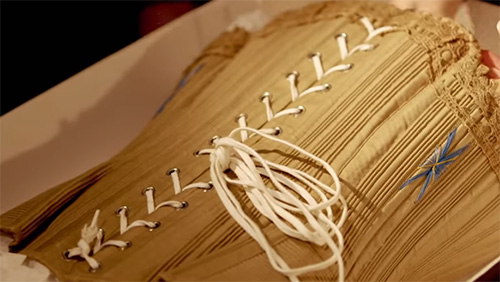 There was a fashion for wearing very, very, very tight bodices. You can see in photographs how the fabric pulls in a way that we would think means it doesn't fit. Tight lacing is something that a minority of people did and that is to get your waist as small as you possibly can. They used to do this by lacing their corsets tighter and tighter.

Some women would keep their corsets on day and night to train their bodies. 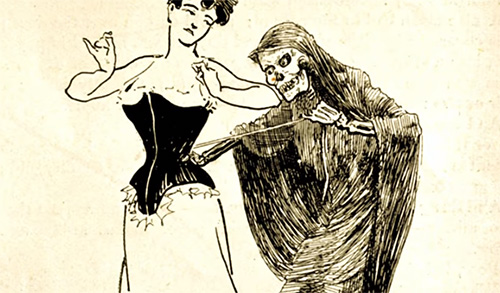 So what are the effects of a corset on the body in the long term? In a human body, liver, for example, is our largest internal organ. It's a large wedge-shaped organ that sits under the ribs on the right. In a corset which brings the ribs in very tightly to give the typical small-waisted outline, the liver gets squashed upwards and it presses against the ribs. In fact, there are specimens of livers taken from women who have died who've worn tight corsets. And they actually have ridges on them where the ribs have made indentations in the surface of the liver, because it's been so tight. 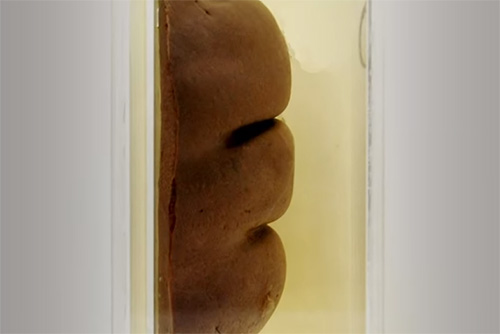 Another organ that may be affected by a tight corset is a stomach that sits underneath the rib cage. If the rib cage is pulled in by the corset, the stomach is pushed downwards into the abdominal cavity. And that would then have an effect on the rest of the abdominal organs which would be pushed down. 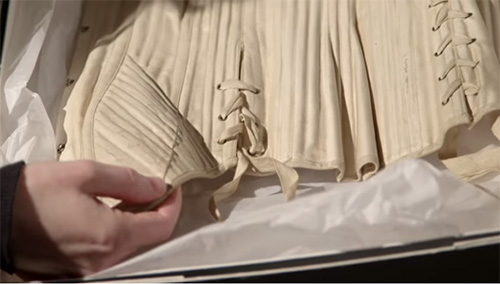 Some women even wore corsets when pregnant. A particular choice came for women about the corset when they fell pregnant because many husbands complained they didn't want their baby's head shaped and molded, but there were women who continued to wear corsets through pregnancy. And there's no way at all this could possibly be good for the baby.

One of the problems with corsets after pregnancy, particularly for women who had a lot of babies, was that of prolapse of the uterus. The pelvic floor muscles have been weakened during childbirth, and then a very tight corset that increases the pressure in the abdomen, forcing all the organs down. So, that would have been a very unwanted side effect of wearing tight corsets.

The Victorian household guides even advised on suitable exercises for a lady.

Most people know that a tight corset can be harmful for your health. But could it be a killer?

The chronic underperfusion – not getting enough air down into the bottom of the lungs – could cause problems. It predisposes to infections like pneumonia, and that was something that a very tight corset, worn for many hours a day, could cause problems with.

If a woman had an underlying problem, it could exacerbate it. For example, if a young girl had rickets from vitamin D deficiency, she had soft bones that were still developing, and they could be distorted very much by wearing a tight corset. There are stories of the ribs breaking and piercing the lungs underneath, which could be fatal. 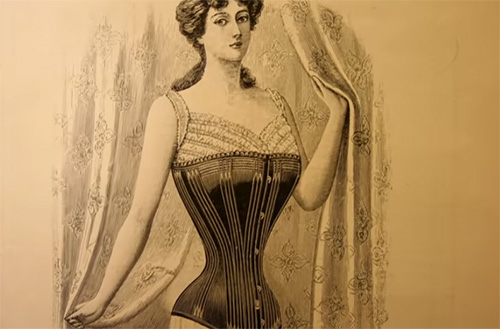 As the century went on, the corset became the focus of a huge debate. Women's possibilities for activity became much larger over the 19th century. By the end of the 19th century, there was nothing unvirtuous in going around on your bicycle, in walking freely. And so, this wasn't very practical for them to be wearing corsets. And increasingly, women began to say, “these are pointless”, “they're just getting in the way”, etc.

It also coincided with the growth of the votes for women, the idea that women were equal citizens. And if they're equal citizens demanding the vote, they shouldn't be treated as some kind of excessive ornament that are there to be looked at and to be admired. 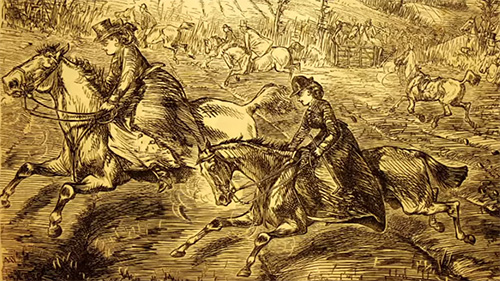 By the 1890s, some manufacturers had started to respond to demands for looser clothing. Yet, one thing will probably never disappear – the temptation to conform to an ideal of beauty, whatever the cost.