Tudor fashion. How did English ladies and gentlemen dress in the 15-16th century

The Tudor fashion in Europe is represented by England of 1485-1603. In this period, the fashionable silhouette consisted of geometric shapes: triangles, disks, rectangles, squares, and so on. However, Tudor clothing was rather charming, especially female outfits. In this article, we’ll look at Tudor men’s and women’s costumes a little closer. What did they wear and why? What trends were fashionable at the time? How certain pieces of clothing were called? And much more.

Tudor costume is easy to recognize because it's all based on geometric shapes: triangles, rectangles, hexagons, and crescent shapes. And for men, squares, rectangles, and disk shapes. It was completely geometric. In silhouette and in design.

Some specialists think that the reason for all of the geometry in Tudor fashion was because geometry itself was an absolute craze.

Let's break it down. We'll start with women. A smock (or chemise), of course, and then a busk. It wasn't exactly a corset, it was made out of whalebone and linen, usually. And it kind of gave you a very stiff torso, it gave you a flat torso, and it also flattened out your cleavage.

When you watch a show like “The Tudors”, they've got busks on, but then they have this gorgeous cleavage bursting out of it. And that's not what a bust did. A busk was supposed to smooth out and kind of eradicate your cleavage.

And then, women wore a bum roll. They didn't always wear it and it came in towards the end of the period. Basically, what it did is allowed your skirts to fall further away from your body to help create that triangular look. The bum roll, however, would reach enormous proportions in just a little while but for now, during the Tudor era, it was just to give more volume to your hips so that you could get that triangular look all the more. 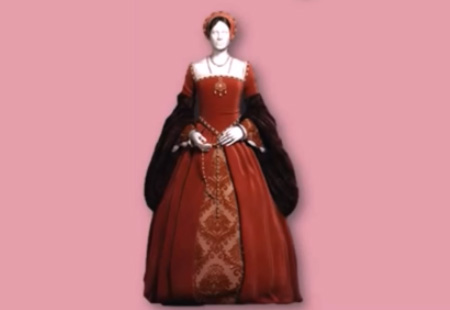 They also did this with a farthingale. A farthingale was sort of an early hoop skirt. It was made of fabric and very thin wooden hoops. It was sort of collapsible, so if you sit down, it would collapse with you. You didn't always wear a farthingale but it did give you more volume if you wanted it.

Over all of this, would go your kirtle. And over the kirtle, would come your gown. Often, the gowns were split up the middle to show the kirtle.

Then, you would put on your foresleeves – these big, drapey, detachable sleeves that would help accentuate this triangular silhouette.

If you wanted to be a bit more modest, you could wear a partlet. It was a special garment, sort of detachable kind of a blouse that you would wear beneath your kirtle to cover your cleavage.

And then on your head, you would wear a hood. There were two sorts of hoods that were generally used: a gable hood and a French hood.

The hair was always long and center-parted. And headdresses took 2 forms. 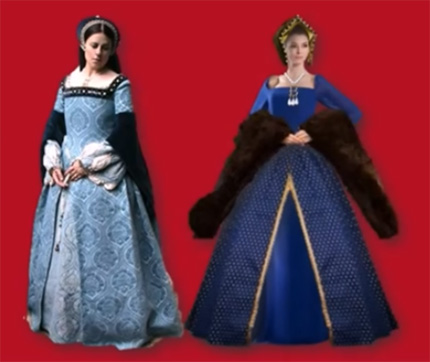 There was this sort of headdress that was called a “gable hood” or “gabled hood”. These headdresses were constructed with wire and starched linen. Sometime they could be simple, sometimes they could be fancy. They usually had a veil down the back, in which you would put your hair.

The other shape was known as a “French hood”. Younger girls could let their hair fall free behind a French hood, but if you were married, you would cover your hair with a veil down.

Let's look at men’s wear in the Tudor era. And let's use the picture of Henry VIII, King of England in the 16th century.

Henry is not fat in this picture – his clothing is extremely wide. The world was getting big – if you wanted to be important, you had to be big yourself. The more space you took up, the better. 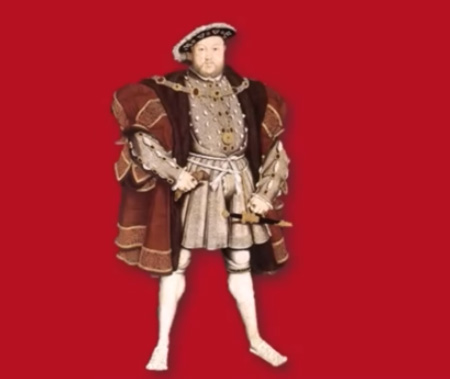 It starts with your shirt. It's not called a “chemise” anymore, we're starting to call it a “shirt”. But it's going to be oversized because of all of the slash and puff everywhere. They had to have a lot of fabric to pull through their slash and puff.

And after that, a basse. It was sort of a skirt for men.

Then, you had your upper hose and your hose, and they were attached at the middle. Henry's wearing a garter here, but hose was actually starting to be divided into two. And then, men would eventually lose the upper hose, keep the hose, and it would become the sock.

Over all that, was worn a big, oversized coat called “chamarre”.

Also, look at his square shoes. They are called “duckbill shoes”.

The kind of hat (by the way, in court, only Henry was allowed to wear a hat) is called a “French bonnet”.

Men could also wear little shorts instead of a basse. They are called “stocks” or “paned stocks” because they have sort of panes in them. Sometimes, you can come across another name – “pumpkin pants”.

And just to confuse you, sometimes “stocks” are referred to as “upper hose”.

In the Elizabethan era, the basse more or less disappears in favor of stocks.