The clothes used in Dark Age Europe was pretty simple. Nothing extraordinary, really. But we can’t say the same about the jewelry pieces. And the Anglo-Saxon jewels in particular. The Anglo-Saxon jewellery makers were skilled and had a bright imagination – that’s for sure. Their products truly were works of art. In this article, we’d like to show you some of them. Because the traditional Anglo-Saxon jewelry could turn ordinary tunics and cloaks of the period into gorgeous and unique costumes.

Let's take a look at some Anglo-Saxon artifacts that help you get a sense of their aesthetic and their style. Like this incredible belt buckle. It's made of gold. Take a look at all of those interlocking designs – this is sophisticated stuff. 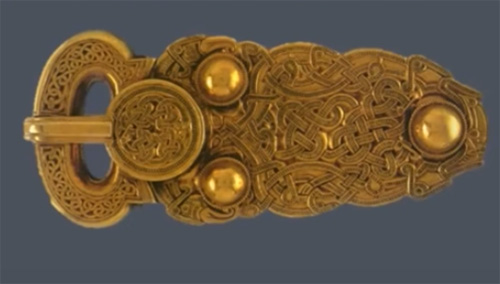 Their actual garments were pretty simple but look at their jewelry. Look at the precision that went into this. It's absolutely incredible. These people were not barbarians, these people were artists.

Look at this cross. You really need a magnifying glass to see just the intricacy of all of the detail and again, that interlocking repetitive design. 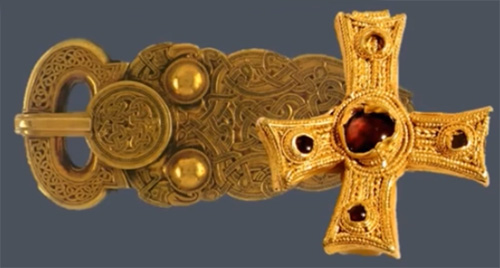 Here is another artifact. It has a name – it's called the “Alfred Jewel”. Look at the enamel work.

And you see this enamel work again here, on this brooch, used to secure a cloak. Start noting the Anglo-Saxon or Celtic (you can call it Celtic as well; the Celts were the ancient people of Britain) design. Take a look at the palette: a lot of russets, a lot of gold bronze, a lot of blues – dark indigo blue. It’s not quite as flashy as the Byzantine palette but a very, very true palate nonetheless. Look at the interlocking work and all of that enamel.

This is a bracelet obviously. Again, you can see the palate at play and that interlocking Celtic design.

And you can see it here again. This is a brooch, a pin for a cloak. Look at the detail. Look at the precision – it's almost as if it was laser-cut. It's incredible.

Now, do you know what we call this technique of using a fine gold frame in which to hold enamel? It's called “cloissone”. It's a very common word, especially in accessories and jewelry.