Folk costume of Vikings. How did it look like?

To modern people, the Viking clothes look weird and romantic at the same time. But what about the comfiness? Would we agree to wear things the Viking way? Our opinion is – hardly. All those layers of heavy and prickly wool or felt, leg wraps that slip off and are too tight for comfort, and lots of jingly items hung from the belt and the hangeroc beads. But the Viking folk costume is definitely unique and interesting. Each small detail played a great role in making life easier for those people.

Let's take a look at the Viking costume. You'll see that it's all part of a Pan-European story. But they put their own spin on everything, including the clothes.

So, let's look at the men’s wear first. It starts off with a “kyrtill”. A kyrtill was a trimmed tunic with a very full skirt.

Beneath the kyrtill, there was an under tunic. It was kind of shapeless and often just made of scraps of fabric. People didn't see it, so it didn't matter how it looked. It was an underwear.

A variety of leggings were used by the Viking men, some loose, some tights, some with feet built in (kind of like a modern onesie), and some without.

Leg wraps. And then, what the Vikings did, they'll get long pieces of wool or felt and wrap them around their legs, from the ankle to the knee. Again, for extra warmth.

If to talk about the footwear, the Vikings wore these little leather lace-up booties, worn by both genders. The leather was soft enough to be comfortable and the sole was harder – to protect the feet. 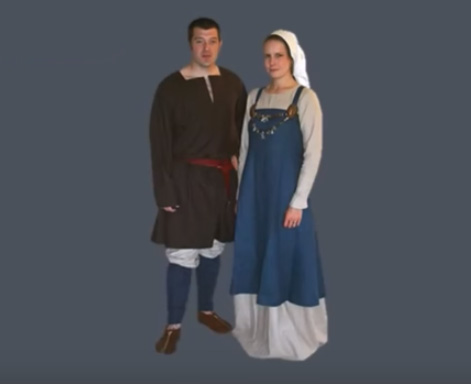 And the last stroke was made with these woolen or felt kind of beanie hats.

Hardly, the Viking warrior, is it? But this is what most Viking people wore in day-to-day life.

Let's look at women's wear, which is a bit more interesting.

It started off with a tunic-cut underdress with long sleeves.

Then, they had an item of clothing that only the Vikings wore. It's called a “hangeroc”. You can really see that it's a Danish-sounding word. The hangeroc was sort of a pinafore (a kind of an apron).

So, let's look at the hangeroc a little closer. Basically, it was a pinafore that was held up with 2 straps and fastened with brooches. But there was one cool element: between the 2 brooches, there hung a string of beads. And from this string of beads, the Viking women would hang everything they needed for the day. They would hang purses with money in it, maybe some herbs for luck, a knife, scissors, a comb – every needed item for the day.

Hanging all of your stuff from your hangeroc beads meant that your hands were free, which means you could keep your hands warm. You didn't have to have them exposed, carrying things around. Because there were no pockets at the time, or at least pockets were very, very rare.

Also, they would have a belt sort of slung around their hips. And they would hang everything from there, too. Keys, purses, etc. It was sort of like wearing the contents of your handbag on your body.

Another piece of a Viking woman’s outfit is a headscarf. White, linen, secured at the nape of the neck.

The last element was the leather shoes, the same as the male ones.

Viking fashion was different, it was unique. It wasn't formed by a larger aesthetic, but you should recognize it as being quintessentially and quite uniquely Viking.