The national costume of Norway is called “bunad”. It is a must-have for the natives, especially for women. But as for me, even if it wasn’t for the honor of old traditions, Norwegians should wear bunads just for their beauty. These costumes are real masterpieces, both modern and vintage ones. If to talk about the prettiest items of the outfit, they are definitely the silver jewels.

Norwegian national costume is called “bunad”. It was formed from authentic folk clothing, used in different regions of the country for centuries, in the 19th century and is being widely used in Norway until today. There are many different variations of bunad – more than 450 – that vary in the region of origin, marital status, gender, colors, materials, decorations, etc. The citizens of Norway honor their old tradition of wearing the folk costumes so much. More than 60% of women and about 10% of men in this country own a bunad; some of those outfits are modern and others are passed from mother to daughter. Sometimes the clothing is modern but certain elements are authentic, like silver decorations, bags, jewelry, or headdresses (though, most of the traditional headgears are out of use nowadays). Bunad is a must-have for Norwegians and it’s amazing how widespread it is. Though, this national costume is very expensive because of the complicated handmade embroidery, intricate silver accessories, and fine natural fabrics.

Bunad firstly appeared among farmers. Some writers claim that it was used by ordinary people during their work in the fields. But it isn’t very practical, so bunad was more likely worn as a festive dress among Norwegian farmers. In those days, there was no single established folk dress for the whole country. In every region, district, or even family the costume was different. Craftsmen made unique changes, used their taste and skills to improve the clothes. Only in the 19th century, bunad changed from a simple folk dress into an officially established national costume for the country. Modern bunads are often made on a base of authentic folk garments and have a historical background.

General features of an authentic bunad

Traditionally, the Norwegian national costume is made from wool. Male trousers are made from a special fabric called “hodden” or “wadmal”; it is a coarse undyed woolen fabric typical for northern European countries (invented in the 18th century). For shirts, cotton and linen cloth is used. Aprons and shawls are made from silk or wool. Purses are very important accessories; and they should match the main garment in fabric, style, decorations, and embroidery. The jewelry and metal decorations of a bunad are usually made from silver or sometimes gold; they traditionally are handmade and have an esthetic and artistic value. There are many different headdresses that complement the traditional outfit, but in modern times they are seldom worn, especially by women. Men are still wearing their various traditional hats. The authentic shoes are handmade from leather; today, Norwegians mostly use ordinary shop-bought black shoes with a large silver buckle on top. The shoes are worn with woolen stockings – it is an obligatory part of the costume. 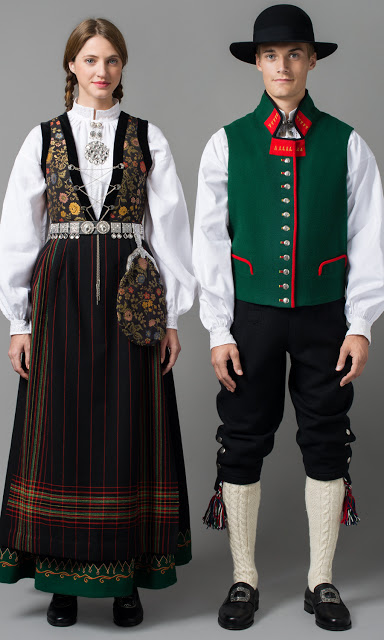 Young man and woman in the traditional bunad. Photo from Folkcostume.blogspot.com

But the most outstanding and useful feature of bunad is the adjustability. A person can have a single outfit for the whole lifetime. They just remake and adapt it if the shapes of the body change. The design and cut of the garment leave some space for the wearer.

The traditional male Bunad consists of a linen embroidered shirt, knee-length trousers, a vest, a jacket, stockings, shoes, a hat, and an obligatory item – traditional silver accessories (belt buckles, cufflinks, buttons, shoe buckles, etc.). Of course, there are hundreds of varieties of each garment. But mostly vests, jackets, and headdresses differ. For example, the traditional jacket from Romerike (south-eastern Norway) is made of white wadmal and is cut exactly ten centimeters above the knee. And the traditional jacket from Hedemarken (Eastern Norway) is made of dark wadmal and has long joints. 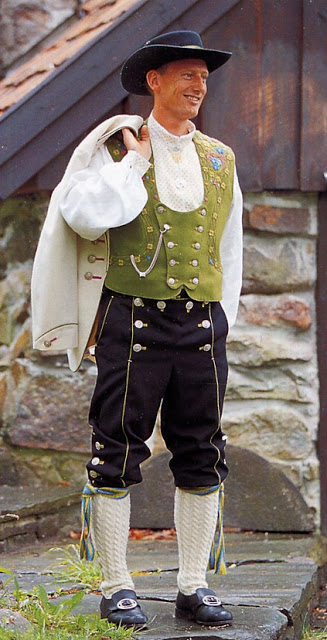 Male bunads are less decorated than female ones. There are less embroidery and fewer accessories. But still, men’s national outfit of Norway is very elegant, noble-looking, and interesting.

The national female bunad of Norway consists of an embroidered blouse, a long skirt, a bodice, a shawl, an apron (in some regions), a headdress, a purse, a belt, stockings, shoes, and silver jewelry. There is a great variety of women’s outfits but all of them are very beautiful, feminine, and intricately embellished.

Female bunad is always decorated with embroidery. On some garments, there is not much embroidery, other costumes are richly decorated with various embroidery designs. The patterns are mostly floral, colorful, and rather close to the natural forms and shades. In old days, the colors of embroidery could tell a lot about the owner of the clothing – like her marital status. For example, white embroidery showed that she’s single, multicolored – married, and black – widow. The decorations of a whole bunad are made in a single style, so the embroidery designs are the same for a bodice, a skirt, a handbag, and sometimes even a shawl. That’s why the whole costume looks like an inseparable ensemble. 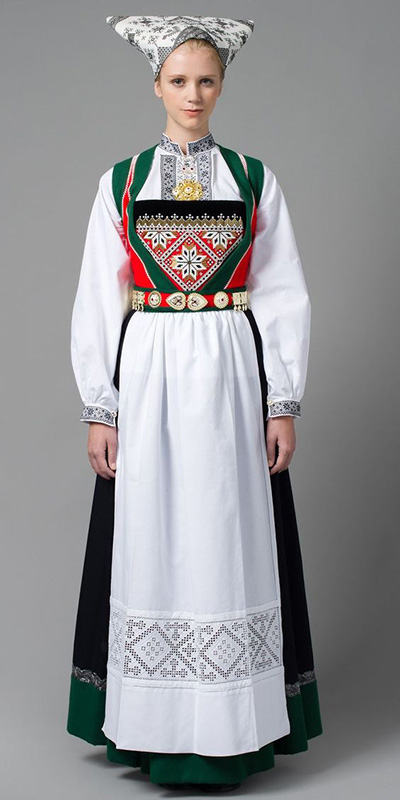 One of the most elaborate pieces of Norwegian traditional dress is a headgear. It can be rather big, decorated with gold, gems, metal chains, embroidery, etc. The shape of wedding headdresses is often similar to a crown; everyday headgears are caps and bonnets. It’s a pity, nowadays women seldom wear the traditional headdresses.

Jewels used by Norwegian people for centuries are mostly silver. This metal is very symbolic and historically connected to the folklore and culture of Norway. There are dozens of legends and beliefs connected to silver production and blacksmith’s craft. Also, this metal is considered to be a good protection from evil. Norwegians used to get their first silver jewelry in early childhood – a tiny silver brooch was pinned to a baby’s clothes. Later, a person received and bought other silver pieces and used them during the whole life; often such jewelry items were passed through the family for centuries. 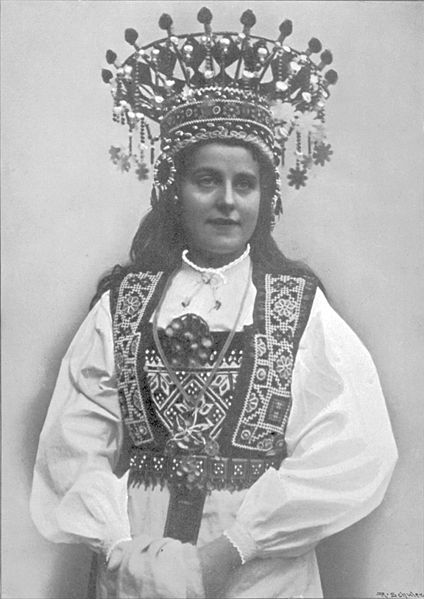 Old photo of a woman in bunad. Beautiful embroidered vest and fine headdress. Photo from Wikipedia.org

The most widespread silver folk jewelry pieces in Norway are a large women’s brooch called “sølje”, a neck closure of a shirt (buttons or a pin), cufflinks, a shawl chain that connects two ends of a female shawl, shoe buckles, a belt buckle, and a silver purse frame for the traditional women’s handbag. People also used rings and various decorative elements for the costume and headdress. Though, Norwegian folk outfit doesn’t include earrings.

Norwegian traditional silver jewels used to show the status and wealth of a family. The pieces were handmade and rather expensive. Only the best blacksmiths were allowed to work with silver and they used all of their skill to create real masterpieces from this noble metal. There were many regional features and peculiarities of jewels. You can often tell the area of origin of a vintage item just from the design. 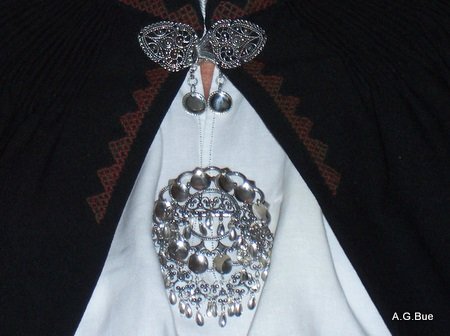 Norwegian silver bunad jewelry – a brooch and a shawl clasp. Photo from Norway-hei.com

Traditionally, people didn’t use more silver jewelry than was accepted. So, every item had to be ornate and beautiful because you can’t compensate the quality by the number of items. But the traditional silver jewels – just like the costumes – are divided into everyday and festive ones. In a day-to-day life people wore simpler jewelry pieces, while for special occasions, they chose more elaborate ones.

In this article, we won’t talk about the folk costumes of other ethnic groups in Norway. We’ll dedicate a special article to these national outfits one day.

I saw the costumes and would like more information about them including prices in u.s dollars

The prices depend on witch bunad you get. This is in part due to the embroidery, silver, material. And so in. My New bunad with all the silver, shoes, linen shirt and jacket is easaly going to hit Five thousand dollars.
Quote
#2 Lisa Redmon 2019-04-18 22:48
I saw the costumes and would like more information about them including prices in u.s dollars
Quote
#1 Gmohr@altrionet.com 2018-04-10 06:25
Hoping someone may know of a source for a traditional men's black felt hat like the 3rd one pictured above. I bought one in Oslo many years ago, but recently was stolen.
Quote
Refresh comments list