Hungarian sheepskin cloak Bunda – bizarre-looking but so cozy and warm

This cute shepherd’s outerwear is rather typical for Slavic countries, especially the mountainous territories. It is called “bunda” or “suba” in Hungary; “hunia” in Ukraine; “sarică” or “bituşca” in Romania; “gunj” in Montenegro, etc. This large, heavy, and very warm sheepskin coat – or rather cloak – used to serve as clothing, a blanket, a bedcover, and a raincoat all at the same time. Today, few people in Hungary still wear it. But its unique appearance makes bunda an important part of Hungarian folk culture.

Hunia – Ukrainian authentic outerwear from the Carpathian Mountains. Ukrainian hunia is a bit similar outerwear to a bunda but it is woven from sheep fleece rather than using whole sheepskins.

A bunda is large sheepskin outerwear worn by shepherds and people from distant farmsteads. It is usually floor-length, sleeveless (the cut is similar to a cloak), warm, and furry. It covers the body of a wearer from the neck down to the toes. A bunda is traditionally made from Hungarian long-woolled sheep’s wool, so the outer side of this winter garment is very hairy and shaggy, which adds more warmth and is somewhat waterproof.

Hungarian traditional bunda is so big that it is sewn from about a dozen sheepskins. The shape of this garment is circular, it consists of triangular pieces of sheepskins sewn together. Of course, it means that this garment is heavy – up to 11kg. It is hard to carry such weight on your shoulders the whole day long, but it’s worth it because no frost, wind, snow, or rain bothers you much in it. That’s why this winter wear was in use for centuries in European mountainous areas (not only in Slavic countries but also in France, Greece, etc).

Usually, a bunda was furry from one side and simple unadorned leather from the other side. Shepherds needed practical and functional pieces of clothes rather than decorative. But there were also festive variants of a bunda worn by wealthier city-dwellers. Sometimes, they had a lot of embellishments on leather – embroidery, applique, and so on. So, people wore them decorative side out to show their status and wealth, and when rain started pouring, they turned it inside out so that long fur protected them from the rain. 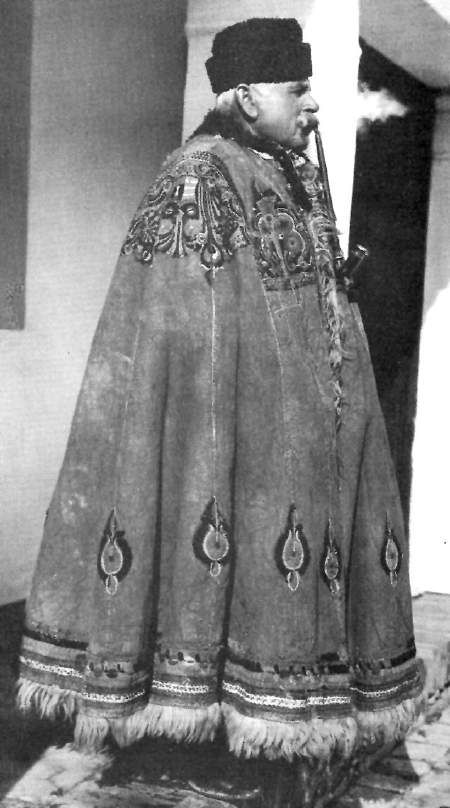 A bunda was expensive winter wear – you can imagine as much because so many skins are needed to make one. And even more costly were decorated bunda cloaks. So, ordinary villagers often couldn’t afford a bunda or bought only one in their whole life.

Those who had a bunda, used it day by day, taking as much as they could from it. They wore the cloak on a daily basis, spread it on the ground and used as a cover when they had to spend the night somewhere far from home (for example, shepherds traveled with their sheep in the mountains), used it as a picnic blanket during meals, etc. Even when the coat got old and outworn, people didn’t just throw it away – they laid it on the floor for warmth or put it on the bed in a stable. Such a useful and durable material as sheepskin was highly valued and estimated.

Today, very few people in Hungary still make and wear a bunda. Mostly, they’re shepherds that continue an old tradition or folk costume lovers who buy it for festivals and folk celebrations. But also, lately, this eye-catching and bizarre-looking outerwear became fashionable among the youth, so designer sheepskin cloaks are being made as unique contemporary winter wear.