Hungarian traditional embroidery. Hungarian diaspora in the US showed the best embroidery patterns

The most interesting thing about the craft of embroidery around the world is that there is an endless variety of patterns, stitches, and motifs. Each country has its own features and techniques of embroidery. Hungarian traditional embroidery is usually floral and very colorful. At first glance, it looks rather simple, but take a better look – it’s the details that really matter.

Hungarian embroidery is a true art form. Although the Hungarian embroideries date back only to the 15th century, there's evidence that embroidery has been a part of Hungarian culture much earlier. It is known worldwide. To do this beautiful handwork, young girls are taught very early by their mothers and grandmothers and are more intricate in technical aspects or learned along the way.

Ruby Petho, a native from a Hungarian settlement in the US (Albany, Louisiana), has mastered the local art form of embroidery and has stitched many beautiful pieces. As a child, she learned embroidery from her mother. In her travels to Hungary, she sought out the shops that handled embroidery fabrics, threads, needles, and designs.

“I first got involved with the embroidery because when we were children and it was bad weather, we could not go outside to play. We have a large family, so what my mother did, was handed us something to do. I might have been maybe four years old but I was handed a needle and thread and a pattern to embroider, and that's what did. So I learned and, apparently, I was always a quick learner, so that's what I did – something with my hands”, says Ruby Petho, famous Hungarian artist and craftswoman.

In Hungarian style of embroidery, knots are non-existent and the satin stitch every thread lined up touching the next thread is employed throughout the motif. Hungarian thread is thicker than the threads available in the US. It is widely known that in Hungarian embroidery, the reverse side of the piece is just as smooth and flawless as the front side. Each region in Hungary has its own pattern designs particular to that area. Flowers, leaves, and vines, all placed equidistantly from each other, are the most popular. 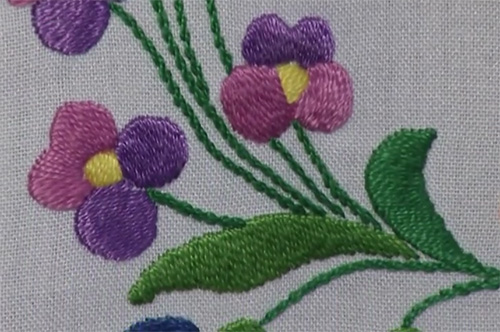 “Most of this embroidery came after we had exchanged teachers coming to Albany to teach on URI in classes. And Modi Friedman, she taught some of the older people in the settlement on Thursday nights. And she bought patterns and threads from Hungary and gave us each a piece to finish”, continues Ruby Petho.

Full Art Institutes were developed in many cities and talented women put their efforts together to create many beautiful pieces of embroidery for exhibitions, competitions, and sales. When you embroider, it's very important to use the correct colors and stitches from each region. 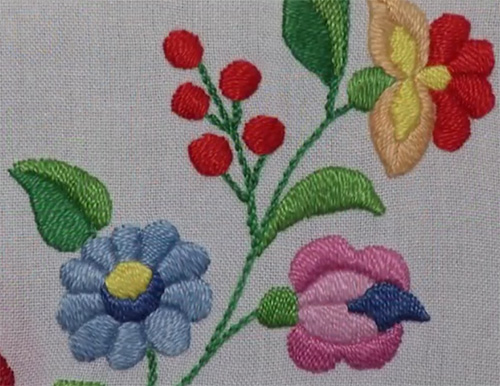 “But these patterns are very colorful and we do a lot of satin stitching. And also we know how to finish off these patterns without a lot of threads hanging. And I'll show you what I mean. This is the wrong side of this pattern – there are no threads hanging and there are no knots showing. So that's one of the differences and seeing something that is embroidered in Hungary”, says Ruby Petho. 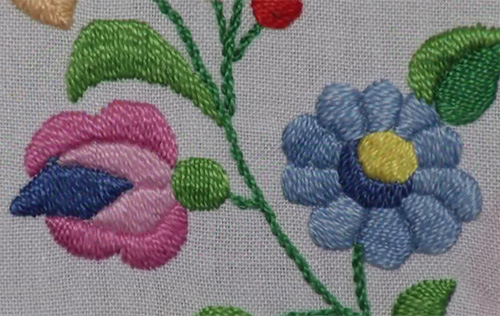 According to some experts, there are approximately 20 or 21 folkloric regions in Hungary. Hungarian embroideries are discussed as they are geographically located within four large areas. 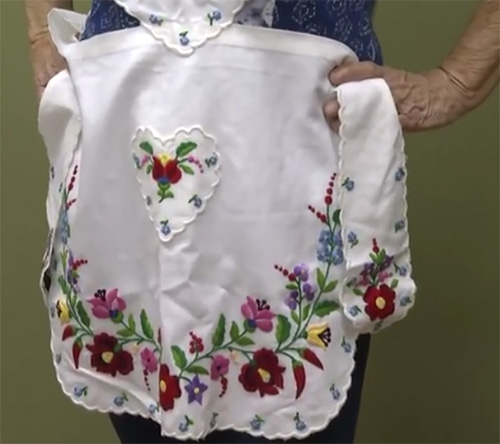 Hungarian embroidery usually uses threads the size number 8. They can be wound up into little balls or into embroidery floss sets. The threads are 100% cotton. 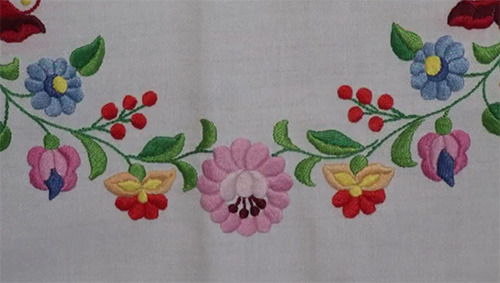 Ruby Petho says about the traditional Hungarian embroidery: “I just don't think it should be lost. Everything has gone to machines today and nobody wants to take the time – and these do take time. To do it properly and to do it right does take time. But once you create something, it will last several lifetimes”. 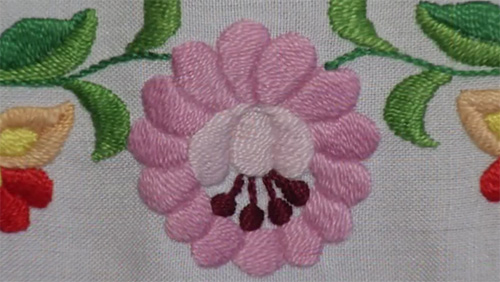