Gagauz national costume. Gagauzia is the offspring of Kumans and Pechenegs

There are about 250,000 Gagauz people in the world. Most of them live in Europe, approximately 150,000 in Moldova and 50,000 in Ukraine. Also they dwell in Turkey, Russia, Romania, Bulgaria, and even in US and Canada. Despite the small number of people this nation survives and keeps its history, traditions, cuisine, folklore, language, and traditional clothing. Many of their traditions are really interesting and outstanding. In this article you'll read about Gagauz clothing traditions and national costume. 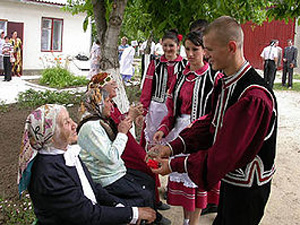 The traditional clothing of Gagauzians is related with the national costume of Balkan area. Today Gagauz people use ordinary western-style clothes for every day. But on national holidays, ceremonies and celebrations they often use the traditional attire. Though older people still wear pieces of national costume in day-to-day life. 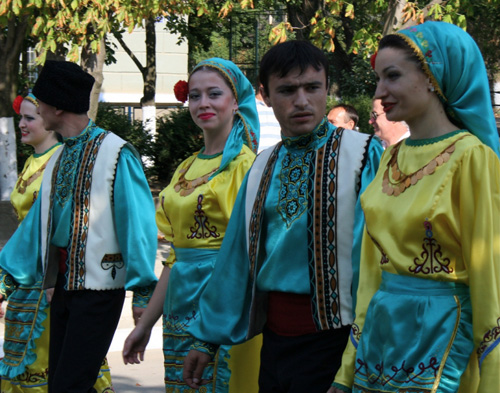 In winter Gagauz men traditionally wear a shirt, trousers made from sheepskin (with fur turned in), a sleeveless fur coat, a short sheepskin jacket and a fur cap (Karakul sheep hat). Such garment is typical for shepherds, and that's one of the main crafts of Gagauzians.

The national Gagauz women's costume consists of a canvas shirt, a sleeveless dress, an apron, a smock, and a large black kerchief. In winter they use a dress with sleeves, a jacket, and a sleeveless fur coat.

The kerchief which is obligatory for women of all ages is often decorated with coins. There is a unique tradition in Gagauzia: when the bride at her wedding wears a kerchief, it is decorated with 1 to 4 coins which are a gift from the groom's mother. Unmarried women and girls wear a kerchief not the whole time. The bride wears it and uses it permanently, but her hair may look out of the kerchief. After the woman gives birth to a child her kerchief should be worn so that her hair never looks out. 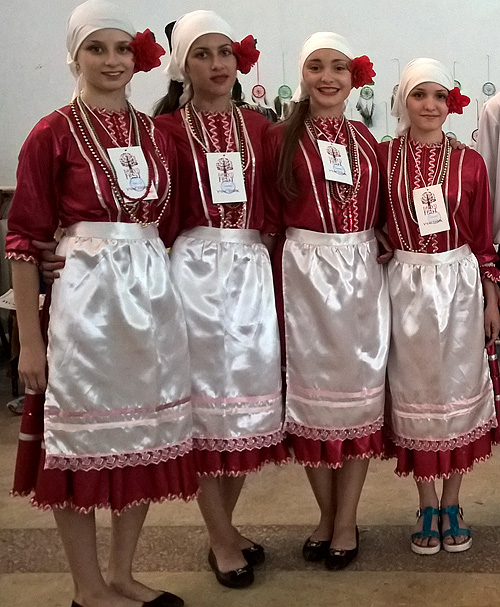 Female clothing is rather modest and dark-colored (day-to-day costume), but Gagauz women wear jewelry in large quantities. Jewelry makes the costume look more festive and bright. Girls and women use bracelets, earrings, and necklaces (usually made from golden or silver coins). Unmarried girls usually wear necklaces of 1 row of coins, for the wedding they wear 2 rows of coins, and the groom's mother presents her daughter-in-law with the 3rd row of coins. If the family is rich the woman wears as many rows of coins as she can buy. Sometimes women used necklaces that covered all their breasts down to the waist.

Gagauz culture is really unique and marvelous. These people keep their traditions and try not to assimilate in our globalized world. If they stop fighting and undergo assimilation, it would be a true loss to the world in general and for Ukraine, Moldova and Bulgaria in particular.