What did they wear in Ancient Greece? Minoan clothing

Minoan traditional clothes were very colorful and cheerful. Though in our time, these costumes would look scandalous and extravagant, we can hardly imagine such garments worn in daily life by ordinary people. But Minoans did dress differently than we do now – they were rather open-minded and didn’t have complexes about their half-naked bodies. Also, both Minoan men and women loved jewelry, especially gold and bronze bands.

The Minoan civilization was a Bronze Age Aegean civilization on the island of Crete and other Aegean Islands (it appeared circa 2700-1450 B.C. and ended circa 1100 B.C.). It was the first advanced civilization in Europe.

We know a lot about Minoan clothing tradition because of the wall art that was left behind and because of sculptures. So, let’s look at their outfits in detail. 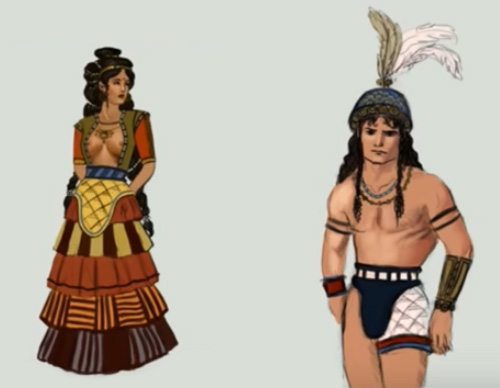 First, a tightly fitting sleeved bodice, tailored to expose the breasts. Obviously, the breast was in no way taboo in Minoan culture. In fact, it was something that was shown off.

A tightly cinched waist was fashionable. It was cinched in with a belt.

Then, a decorative apron that was often padded.

And at last, these bell-shaped skirts constructed of layers of different sorts of fabrics with different designs, sewn together in ruffled tiers.

The outfit could be topped with a cloak.

If we look at the woman’s head, we’ll see incredibly elaborately coiffed hair accessorized with bronze or gold bands or strings of beads or ribbons.

The outfit typical for Minoans really gives the hourglass silhouette – for the first time in human history of fashion. It was they who invented it and made it fashionable.

There wasn't much menswear because, basically, guys just wore decorative and colorful loincloths made from different fabrics and leathers, sometimes padded, and often with a sort of codpiece to protect the male organ. And one can only imagine that these codpieces were often slightly exaggerated in the same way that Egyptian men overly starched their shenties at the front.

And they also used a feathered, fitted headdress.

Just as women did, men wore a cloak on top.