What clothing was used in Dark Age Europe

The Dark Ages, also known as the Early Middle Ages, is a period after the fall of the Roman Empire. The style of clothing at the time wasn’t much different from the previous years, because fashion trends didn’t change as quickly as they do today. But still, there were some peculiarities typical exactly for the Dark Ages. Both men’s and women’s outfits in Dark Age Europe were based on a tunic. Though, the male tunic was shorter, while the female one was longer and resembled a gown. But let’s talk about the Dark Age costumes more thoroughly.

So let's take a look at Dark Age clothing in Western Europe. Don't get too excited… Yup, it's based on the tunic. But these tunics were a little bit different to the tunics that we find in ancient Rome and in the Byzantine Empire. Because they were constructed on an A-line or with this scalloped bottom which was split. Why? Fashion is not an island, it's a response: the people of Western Europe were horse riders – not that the Byzantines weren't, of course, they were; not that people in the Islamic world weren't, of course, they were, etc. However, it was decided, and quite rightly, that it's easier to get on and off a horse in a tunic that is flared or has slits in the side, so this sort of A-line flared tunic started to develop in Western Europe in the Dark Ages.

The length of the tunic depended on the occupation of a person. Workers wore a short garment, while people who used their brains to earn a living wore longer tunics.

The clothing of ordinary men – peasants, workers, and slaves – was simple and coarse. They mostly used wool and didn’t embellish their attires much. The ordinary males didn’t even use shoes – most of the time they walked barefoot. 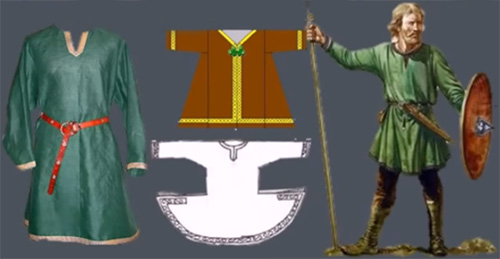 Wealthier men in Dark Age Europe wore clothing made from fine fabrics (often, woven fabrics because they were rather expensive at the time; all the weaving was handmade and laborious), adorned with braiding, embroidery, and jewelry. Linen was a preferable material for rich Europeans in summer because it was comfortable, light, and durable. Silk was also used to make clothes but it was expensive and rare – after all, silk was an imported fabric.

So, tunics were popular. They were trimmed, bias cut, made of a linen or wool, with a square neckline with a split in it. And you'll notice that these tunics were trimmed with braiding. In Dark Age Europe, braiding was big – they were very good at decorative braiding with wool. The designs often were quite complicated – original interlocking and repetitive patterns were used. This was one of the chief aesthetic looks and ideas of Dark Age Europe.

The next part of the male attire are woolen leggings, held up with belts or garters. And, for wealthier Europeans, leather boots, secured with leather straps. Everything is held on to the leg by wrapping pieces of leather around it.

And this was all topped with a cloak. It was pretty basic, and the one bit of spectacular bling were the brooches and the pins that were used to hold cloaks in place.

Women’s outfits were simple, modest, and elegant. In many ways, the church dictated the style of clothing in Dark Age Europe.

The female clothing wasn't so different from the male garments. The women’s costume that would be absolutely typical of Dark Age clothing, found throughout Europe during this era, included a double tunic: a long-sleeved tunic and a bell-sleeved tunic on the outer layer. So, it's two layers. You've got a layer with long sleeves and then an outer tunic unit with bell sleeves, which was, usually, shorter.

Female tunics at first had a simpler cut and design. Later, they became more tight-fitting and silhouette-shaped. 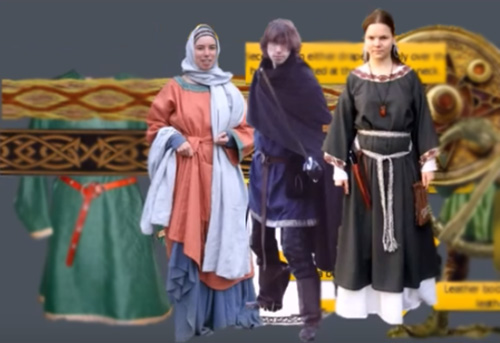 A headdress was a piece of linen either draped loosely over the head or secured at the nape of the neck. Some kind veiling was an obligatory part of a female attire of the time. Again, it was imposed by the church. With time, simple rectangular veils transformed into elaborate headpieces that can be seen in the late Middle Ages.

Women wore leather shoes. Their design was also rather simple – 1 or 2 pieces of leather were shaped and stitched.

Capes and shawls served as an outerwear. They were made from wool or leather. The folds of the capes were fastened with brooches and pins, same as male outer garments. The wealthier a woman, the more intricate and costly the brooch.