The easiest way to wear a Scottish belted plaid. What did Scots wear before the kilt?

Most people know that the national garment in Scotland is a kilt, a wrap-around skirt-like outfit. Or at least, you must have heard the name. But what did Scottish people wear before the kilt? Actually, there was a very popular attire worn in this country for hundreds and hundreds of years. It was a belted plaid. This unique garment didn’t have a single stitch in it – it was held together with a belt and a knot and nothing else.

The Scottish traditional kilt was invented around 1740 and prior to that date, this is what everyone used to wear – the belted plaid. Actually, this is called the “féileadh-mór”, “breacán”, “fhéilidh”, or “the Great Kilt”. It just means the “big blanket”. We don't know how they got this idea – we think that they took it from the Romans but we're not too sure.

The belted plaid was being worn for hundreds and hundreds of years. But the reason this garment disappeared, sadly, was because of the Battle of Culloden. It was after the Battle of Culloden that you were not allowed to wear tartan in Scotland. If you were caught wearing tartan, the sentence was 7 years in prison. So tartan disappeared for almost 32 years before the ban was lifted. By that time, kilt replaced this garment.

How to wear a belted plaid

To put this on, all you had to do is to get a piece of cloth and lay it down upon the ground. There can be any length of cloth at all. You put it down and you have to kneel down upon it and draw it into pleats. There was no size – small, medium, or large – one size fits everyone. 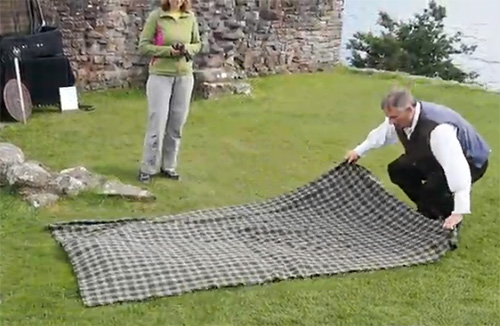 So, we’ve made pleats on the plaid. Now, we need the belt. We put it under the fabric, under our pleats, in a place where the waist would be. 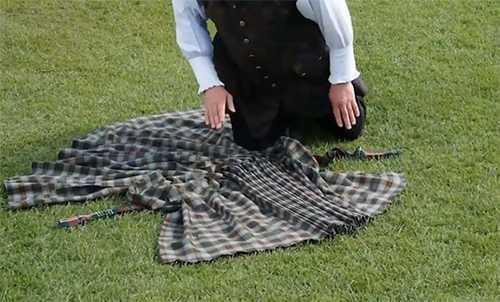 Next, a person sits on these pleats, puts two folds around himself (or herself – the belted plaid was a unisex garment), and ties the belt at the waist. 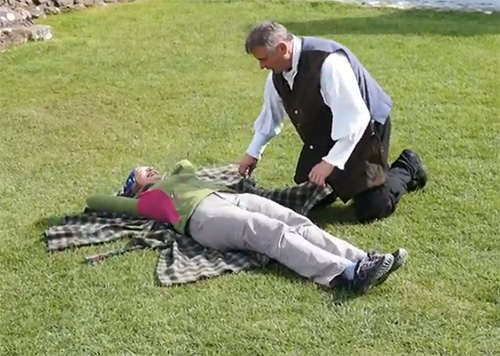 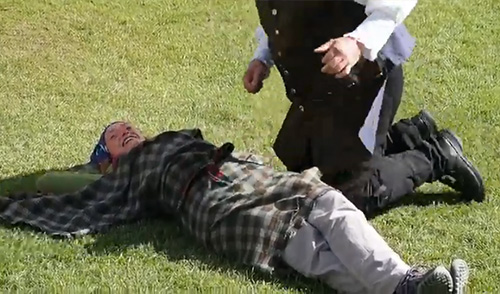 Then, he/she would stand up. Now, there are two parts of the attire – the top and the bottom. The top part is a long piece of cloth that hangs at the back. It was used to cover the upper body, so he/she would just throw it upon the shoulders and the back. 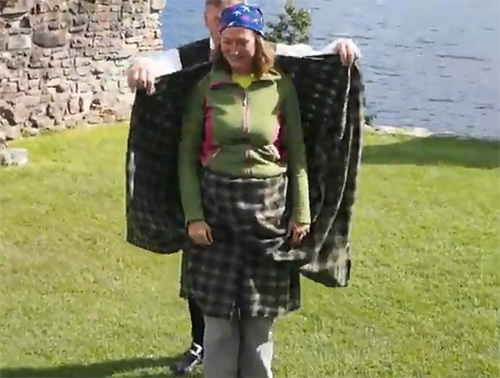 In old times, Scots often used their plaid as a sleeping bag – they wrapped themselves in it and it was nice and warm there.

Another variant of draping a belted plaid is to tie two ends of the top part on one shoulder so that one end covers the front and the second end – the back. This way, a person has free hands to fight or work, and he/she is still warm. 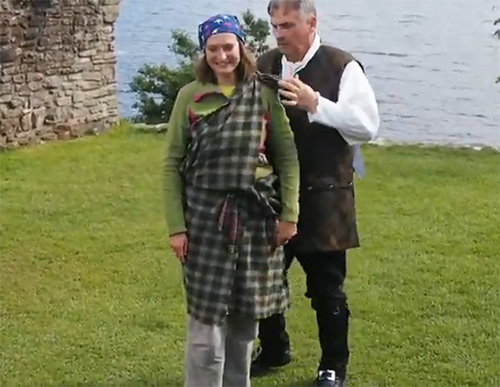 What makes this garment so unique is that there's not a single stitch in it. It's held together by a belt and a knot and nothing else. That’s how the dress looked like for hundreds of years.

But this highland dress was also a psychological weapon to terrify the enemy. Just before the fight, the warrior untied the top knot of his belted plaid – it gave him more freedom of movement for fighting. And if he really wished to terrify his opponents, he grabbed his belt, shed his plaid away, and charged into battle with his shirttail and nothing else on.